Inside: Greek mythology poems to inspire your next storyline.

We all wish we could be God’s at heart, that’s what make the Greek mythology stories feel so true to form at times.

Here are some of my favorite poems rounded up to share how these fables and poetry about Greek God’s have inspired me over the years. From Medusa to Zeus theirs something for everyone. 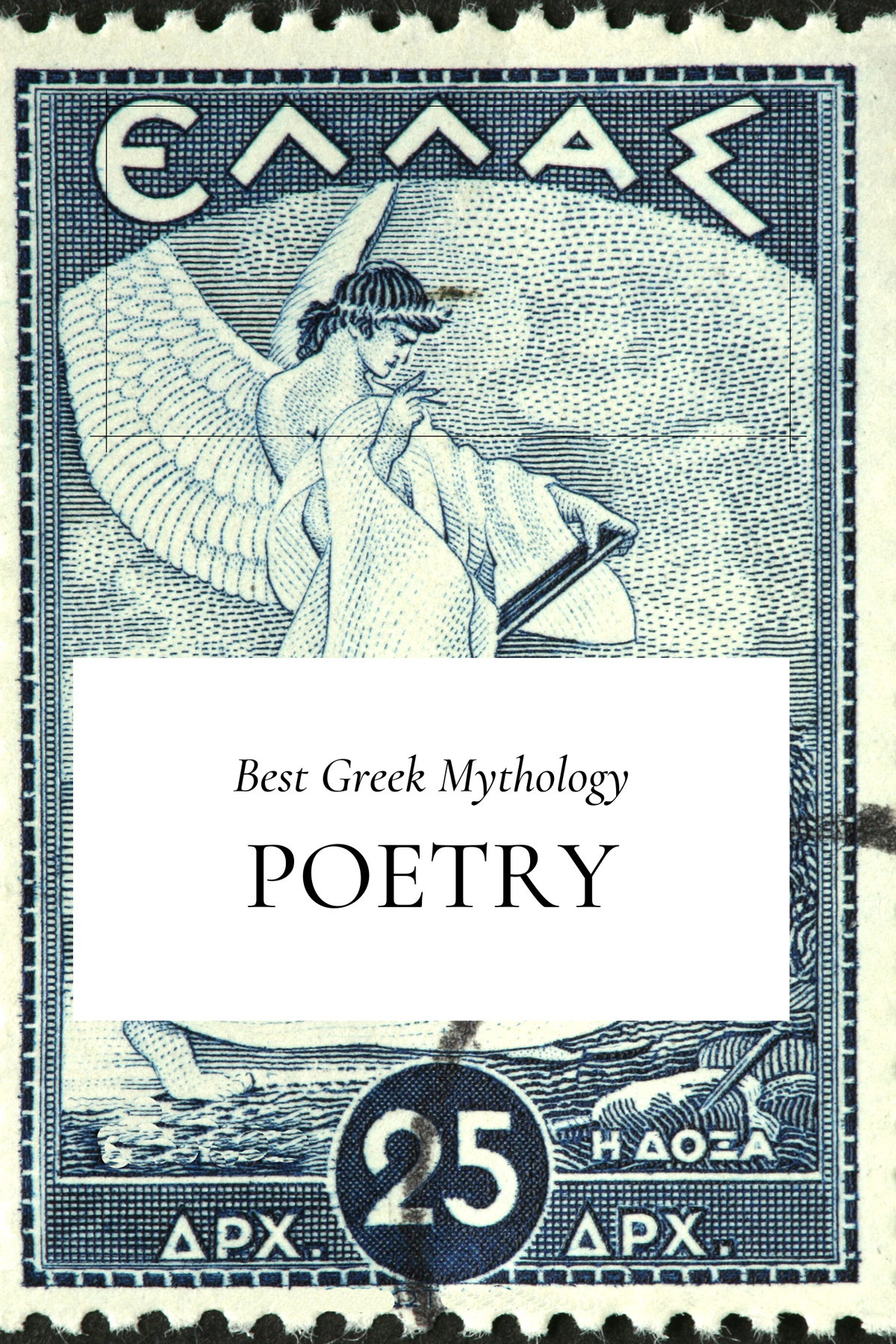 Born from the union of Life and the Moon
His very first cries sang out as a tune
Tearful and painful, his sorrow rang out
And the very next moment, a screaming shout

The young god grew older, and his power developed
In anger and sadness, the world was enveloped
The regal gods began to feel their hearts stirring
and despised him when their judgement was blurring

Unable to resist his fluttering emotions
The god began to believe the hateful notions
Loathing himself, off cowered the young boy
And the world forgot that he first brought us joy.

2. Oh To What is True(Continue Here)

Always calling out but never heard.

Always reaching out but never touched.

Always beneath the sun but never warm.

Always to travel and never to rest.

Always to love but never to be loved.

Always to play but never to listen.

Always to create life but never to live.

3. The Gods Will Die

The water roars and the earth shakes,

The wind blows harsh and the thunder crackles across the sky.

We are okay, we have nothing for them to break,

Says the mother and the father as their young begin to cry.

They are still here,

The gods will not die.

Poseidon angrily stirs up the ocean,

The gods rain down with their resentment,

Oh, if only mankind had not been so foolish.

If only they had simply given a compliment,

They wouldn’t be stuck in their wrath.

Everyone’s so quick to blame my
tenderness. My wound opening like a mouth
to kiss an arrow’s steel beak.

A beautiful man, now, plants his face
in Trojan sand while I tell
the secrets of his body—

make the ground red with truth.
Red with the death of Achilles, felled
by an arrow’s bite when nothing—

nothing—could puncture his Kevlar skin.
Everyone skips ahead to the moral: don’t
be a heel. For just one day I felt

sun where the chafing bonds of sandal
should have been. Without me, he’d be
just more fodder for the cannon.

I made him a hero, Troy’s poster
boy. Everyone forgets I was part of him,
I needed him—that even as he died,

I tasted each pulse—
that I could not hold back its rush of red
birds or the season to which they flew.

Orpheus can never look back at the real woman trailing behind him out of hell, the woman that anybody could see with ordinary eyes. Orpheus must keep his eyes firmly fixed on the imaginal Eurydice before him, towards whom he has struggled all his life. She is not imaginary, not at all, but realer than any mere apparency, than any momentary act of seeing. He must move always towards that perfect image of his wife, and so sustain himself and his song. If ever he turns back, that is, regresses into seeing his wife as an ordinary woman, she is lost. And he is lost.

As the rest of the crew had been lost,
I, alone, was afloat on the sea;
I believed it was thanks to the Fates,
and the thread of my life* – I was free.

Dread dog
Shadowy flame of death
Guardian,protector of the ancient doors
Where in lies the underworlds breath
So beware the craggy shores of hell
Where sleeps the hound of Hades

embalmed in the roots
beneath the methuselah
muffled her still cry 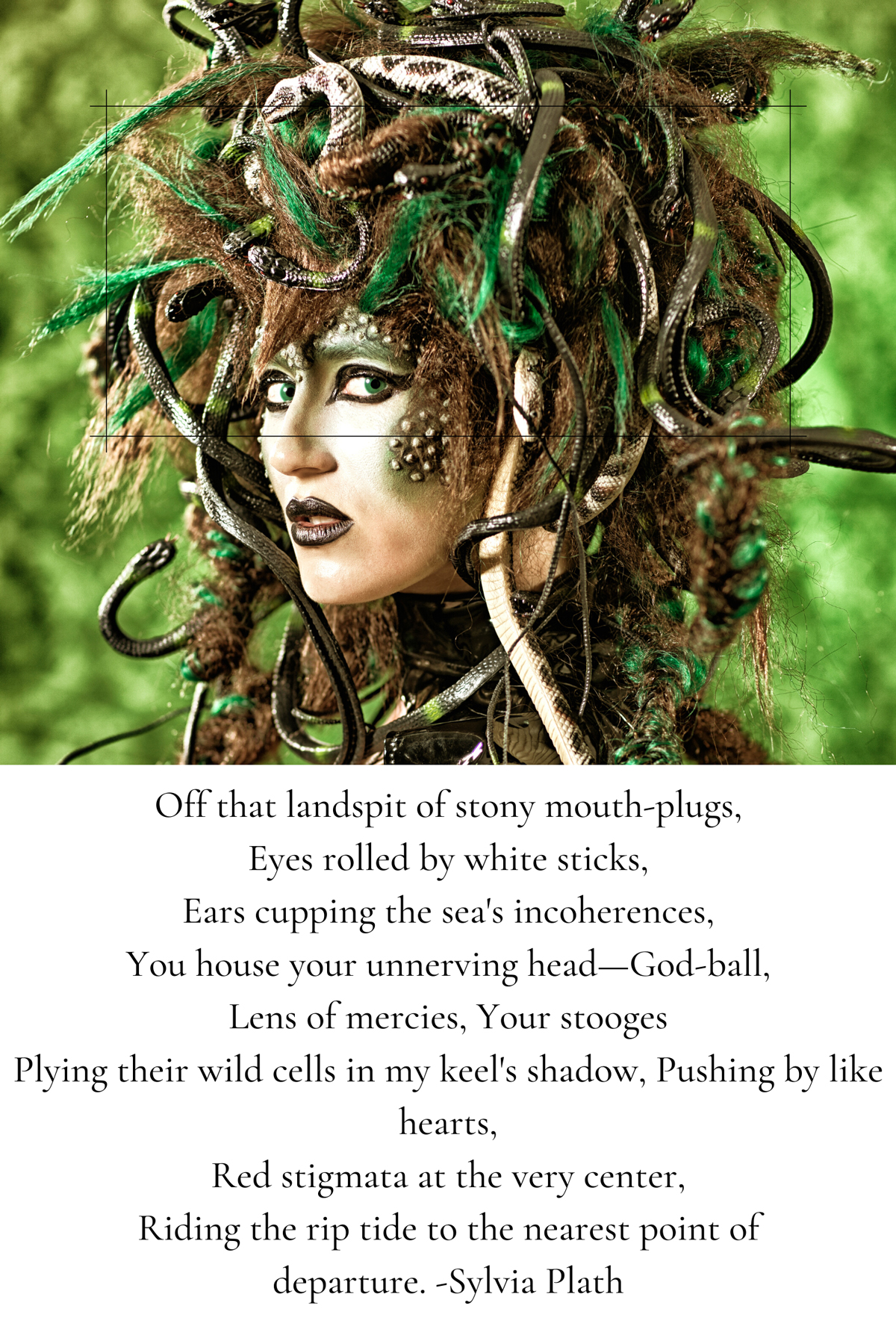 As the most beautiful
Goddess, Aphrodite,
the ancient Greek Goddess
of love, beauty, passion
had powers: love, desire.
Her lover, Adonis
died in her loving arms.

Orpheus with his lute made trees
And the mountain tops that freeze
Bow themselves when he did sing:
To his music plants and flowers
Ever sprung; as sun and showers
There had made a lasting spring.

Every thing that heard him play,
Even the billows of the sea,
Hung their heads and then lay by.
In sweet music is such art,
Killing care and grief of heart
Fall asleep, or hearing, die.

The woods decay, the woods decay and fall,
The vapours weep their burthen to the ground,
Man comes and tills the field and lies beneath,
And after many a summer dies the swan.
Me only cruel immortality
Consumes: I wither slowly in thine arms,
Here at the quiet limit of the world,
A white-hair’d shadow roaming like a dream
The ever-silent spaces of the East,
Far-folded mists, and gleaming halls of morn.

I feel the wings of the eagle
Stretch wide the lips of my liver;
I feel its talons,
I feel its iron beak,
I feel the enormity of its hunger for life, Its thirst for flight
With me in its talons.
And I fly.

Whoever said I was chained?

Off that landspit of stony mouth-plugs,
Eyes rolled by white sticks,
Ears cupping the sea’s incoherences,
You house your unnerving head—God-ball,
Lens of mercies,
Your stooges
Plying their wild cells in my keel’s shadow,
Pushing by like hearts,
Red stigmata at the very center,
Riding the rip tide to the nearest point of
departure,

Odin is the ruler here,
he strokes his beard, he shakes his spear,
he keeps a pair of wolves as pets
and flies a horse who eight legs.

Frigg is queen, and she can see
what every person’s fate will be,
and whether it will turn out well
or badly, though she’ll never tell.

The strongest of them all is Thor
whose hammer causes thunderstorms.
He crushes mountains, likes to flirt,
has two goats pull his cart to work

Freya’s husband roams the worlds,
so she cries tears of solid gold.
In feathered cloak, boar at her side,
she goes to seek him far wide.

Loki is the trickster god:
he causes trouble, then he’s off,
and even Odin cannot make
this wily wicked god behave.

Their world is full of beasts and swords,
serpents, giants, magic wars.
They feast and fight and feast again
but even Asgard has to end…

So while there’s still a rainbow bridge:
to Asgard! where the Norse gods live…

He was a Grecian lad, who coming home
With pulpy figs and wine from Sicily
Stood at his galley’s prow, and let the foam
Blow through his crisp brown curls unconsciously,
And holding wave and wind in boy’s despite
Peered from his dripping seat across the wet and stormy night.

Till with the dawn he saw a burnished spear
Like a thin thread of gold against the sky,
And hoisted sail, and strained the creaking gear,
And bade the pilot head her lustily
Against the nor’west gale, and all day long
Held on his way, and marked the rowers’ time with measured song.

Everyone forgets that Icarus also flew.
It’s the same when love comes to an end,
or the marriage fails and people say
they knew it was a mistake, that everybody
said it would never work. That she was
old enough to know better. But anything
worth doing is worth doing badly.
Like being there by that summer ocean
on the other side of the island while
love was fading out of her, the stars
burning so extravagantly those nights that
anyone could tell you they would never last.
Every morning she was asleep in my bed
like a visitation, the gentleness in her
like antelope standing in the dawn mist.
Each afternoon I watched her coming back
through the hot stony field after swimming,
the sea light behind her and the huge sky
on the other side of that. Listened to her
while we ate lunch. How can they say
the marriage failed? Like the people who
came back from Provence (when it was Provence)
and said it was pretty but the food was greasy.
I believe Icarus was not failing as he fell,
but just coming to the end of his triumph.
–Jack Gilbert

Aphrodite, Aphrodite let down your walls
Aphrodite, Aphrodite help I may fall
Aphrodite I gave you my all, why can’t you reveal yourself to me as you did to all
Aphrodite, show me your eyes from that of the sky
Aphrodite, unveil your secrets from birth “till nigh
Aphrodite give me your hand the hand for mine
Show me your apple the apple of gold won from Paris the god you stole
I don’t want a sliver, a slice, a speck but all
I don’t want the title, the picture, the poster who shan’t fall
I want the Aphrodite enclosed by these walls, the one questioning, wondering when how and will she lose it all
The one running from the true sun and the real moon, Until she finds the deceptive light and masking night
The one cowering, fearing from her own might Her deepest insecurities burning bright
Aphrodite, lend me your ears and hear me speak for you were once at the bottom but now you have reached your peak
Aphrodite you don’t need to be a radiant ray, just true to what you say
Oh, Aphrodite do forget your plight and let’s dance till twilight
As you mysteriously rose from the foamy depths of the sea and took our sky, you gently breathed through these pages and took my heart for a ride.

Bacchus, let me drink no more! Wild are seas that want a shore! When our drinking has no stint, There is no one pleasure in’t.

I have drank up for to please Thee, that great cup, Hercules. Urge no more; and there shall be Daffadils giv’n up to thee.

Why do you follow me?— Any moment I can be Nothing but a laurel-tree.

Any moment of the chase
I can leave you in my place
A pink bough for your embrace.

Yet if over hill and hollow Still it is your will to follow, I am off;—to heel, Apollo!

In the pathway of the sun,
In the footsteps of the breeze, Where the world and sky are one, He shall ride the silver seas,
He shall cut the glittering wave.
I shall sit at home, and rock;
Rise, to heed a neighbor’s knock; Brew my tea, and snip my thread; Bleach the linen for my bed.
They will call him brave.

But give them me, the mouth, the eyes, the brow! Let them once more absorb me! One look now Will lap me round for ever, not to pass
Out of its light, though darkness lies beyond: Hold me but safe again within the bond

Of one immortal look! All woe that was, Forgotten, and all terror that may be, Defied—no past is mine, no future: look at me!