Inside: Rainbow Poem Ideas and Printables for Rainbow Lovers.

Rainbows are symbols of hope. They represent a moment of peace after a storm, both in nature and in life.

Rainbows have served as colorful muses for poets for generations. When they show their rare beauty, it’s easy to be mesmerized by their cheerful colors.

We have gathered a collection of Rainbow Poem Ideas and Printables to bring you the same joy that seeing a rainbow in the sky brings.

1. When You See A Rainbow by Catherine Pulsifer

When you see a rainbow

The colors they do show

They blend together so

Some even seem to glow.

The first rainbow to appear

Was brilliant and so clear

It was God’s promise of no more rain

A promise that still remains.

To this day they continue.

So when a rainbow you do see

Thank God and happy be!

2. My Heart Leaps Up by William Wordsworth

My heart leaps up when I behold

A rainbow in the sky:

So was it when my life began;

So be it when I shall grow old,

Or let me die!

The Child is father of the Man;

And I could wish my days to be

Bound each to each by natural piety.

3. The Rainbow Poem by Christina Rossetti

Boats sail on the rivers,

And ships sail on the seas;

But clouds that sail across the sky

Are prettier far than these.

There are bridges on the rivers,

As pretty as you please;

But the bow that bridges heaven,

And overtops the trees,

And builds a road from earth to sky,

Is prettier far than these.

A rainbow is a promise of: 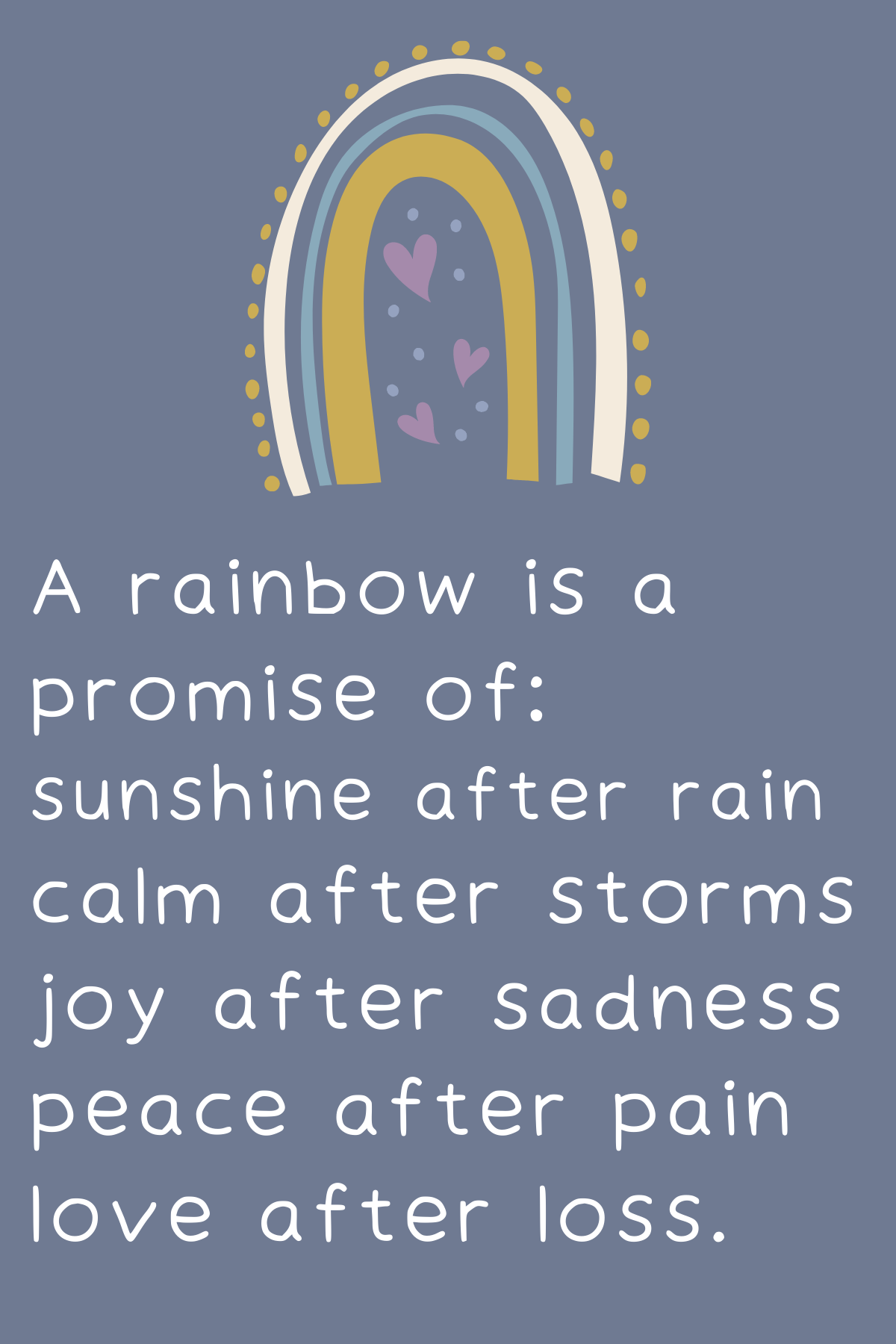 5. The Rainbow by John Keble

A fragment of a rainbow bright

Through the moist air I see,

All dark and damp on yonder height,

All bright and clear to me.

An hour ago the storm was here,

The gleam was far behind;

So will our joys and grief appear,

When earth has ceased to blind.

Grief will be joy if on its edge

Joy will be grief if no faint pledge

Be there of heavenly day.

6. Riding a Rainbow by Kenn Nesbit

I’ll ride on a rainbow

to soar through the sky.

I’ll ride on a kite

as it flies way up high.

I’ll ride on a dragon.

I’ll ride on a rocket

and ride on the moon.

I’ll ride on the wind

and the sun and the stars,

I’ll ride on a cloud

and a unicorn too.

I’ll ride in the seat

of a magical shoe.

But why would I ride

on the sun and the stars?

It’s so much more fun

than just riding in cars. 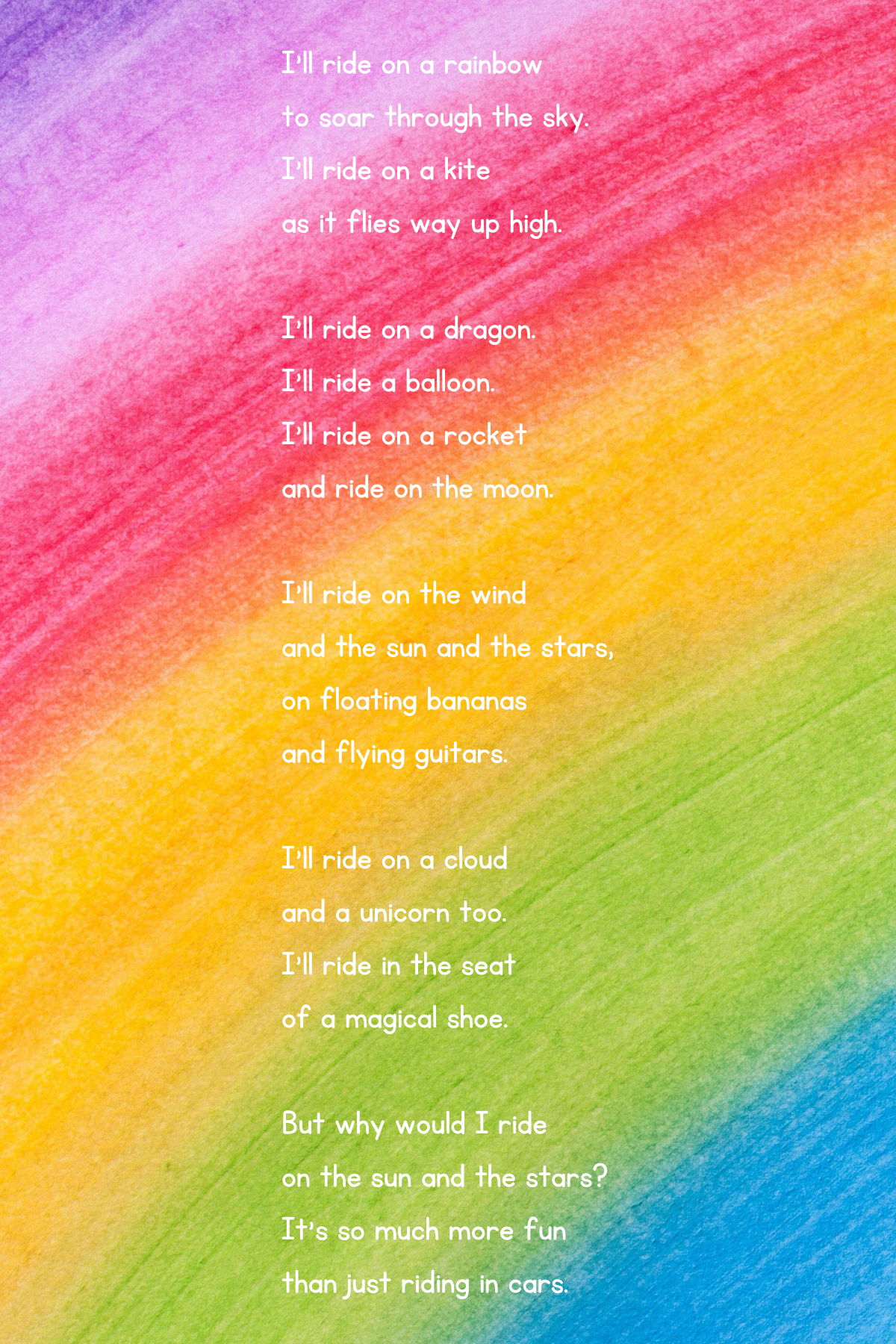 Across the sky, they give a clue

Sometimes single and maybe a double.

They make us stop and pause with awe

The beauty of them drops our jaw

How brilliant is the sky

The beauty we can’t deny.

And at the end of the rainbow

To see if there is a pot of gold

That is what we have been told.

Be thankful for the beauty of the sky

Rainbows and the clouds that float by

Take a moment, stop and look

It can change your outlook!

8. Rainbow Poem on the Mountain by Ruby Archer

See―the Sky has lent her jewel

To the Mountain for an hour

Has forgotten to be cruel

In a kind caprice of power

And the dusky bosom rounding

Wears the opals with an air

In the sense of looking fair.

Now the Sky demands her crescent―

Brightest bauble of her store;

And the Mountain smiles no more.

Red and yellow and green and blue,

Rainbow colors for me and you!

Rainbow colors for me and you.

Red and yellow and green and blue,

Rainbow colors for me and you! 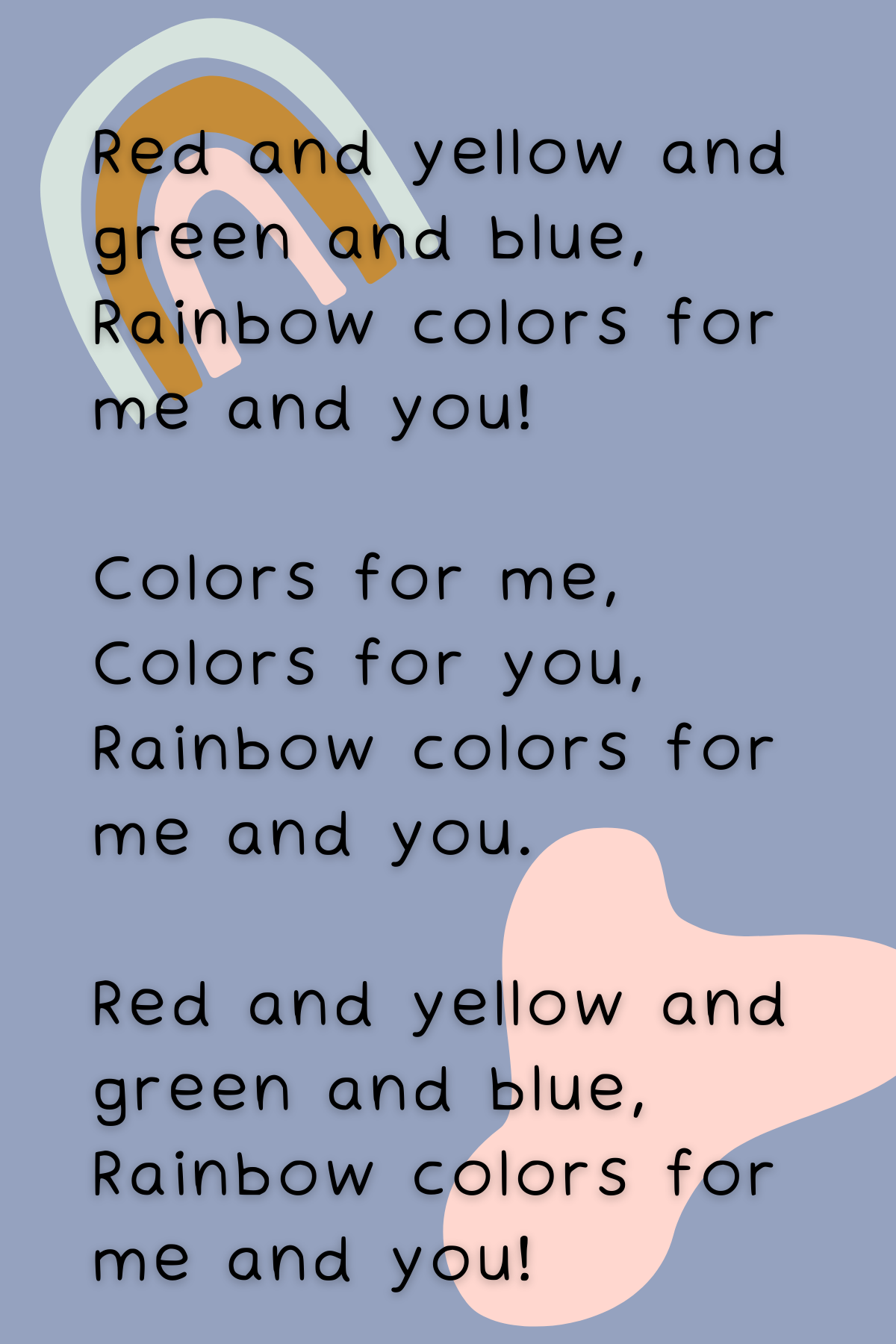 I saw the lovely arch

Of Rainbow span the sky,

As the rain swept by.

And the Bow was gone.

I’m continually inspired by nature, and

The rainbow is one of nature’s greatest optical phenomenon.

The sighting of a rainbow never fails

To bring a smile to people’s faces.

They signify optimism and positivity:

With them comes the sunshine after the rain. 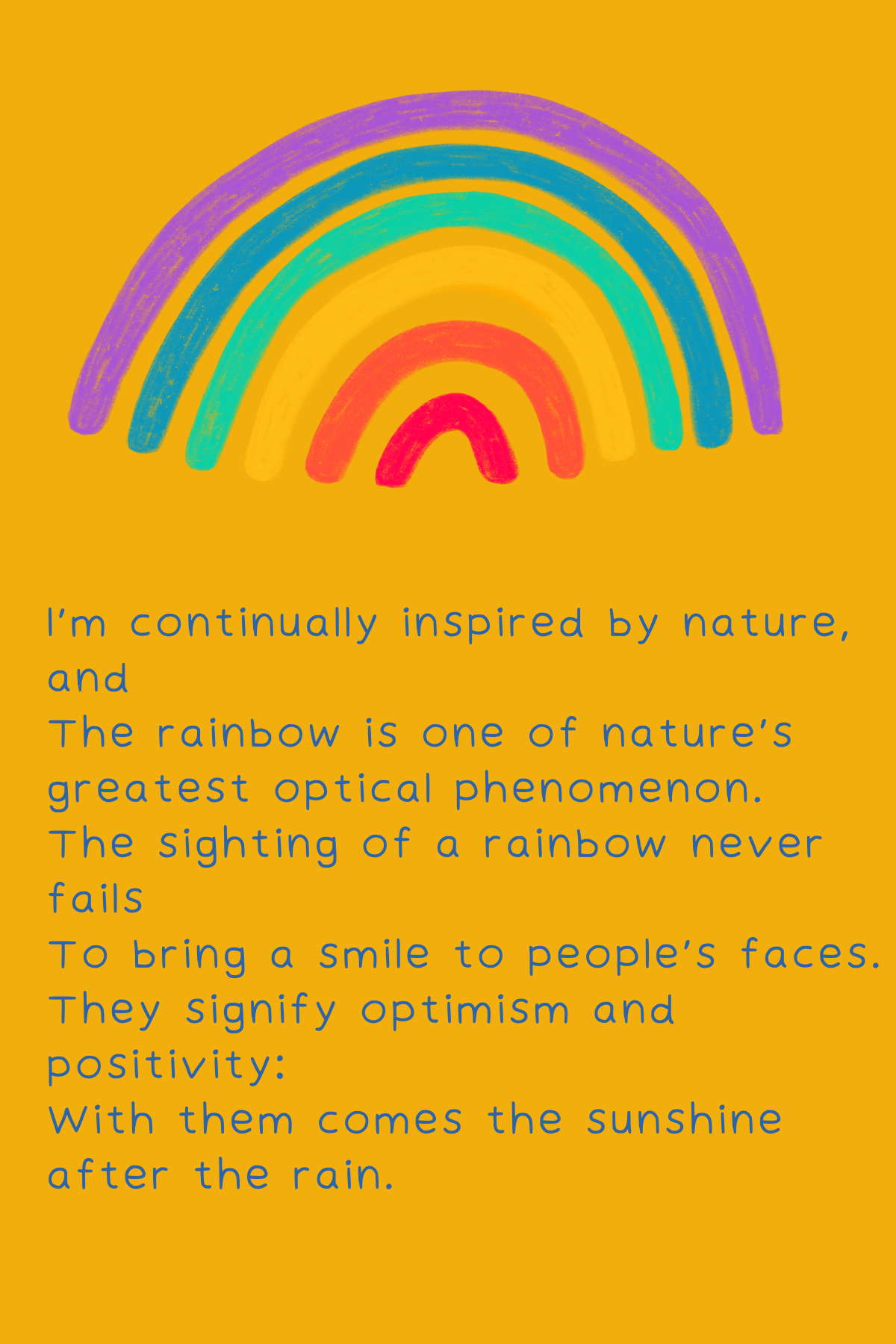 12. The Rainbows by James Baldwin

Out of water, clear and white,

Who has built a bridge so bright?

Tinted with their glowing dyes—

Gold and red and azure blue,

Right against the dusky sky

Shines the path-way, fair and high,

From the valley, cool and green,

Where the floating mists are seen,

To the mountain far away

In the distance, dim and gray.

Throng the bridge with fairy feet,

Crossing to the wondrous land

There the cloudy castles stand;

Till the gray mists slowly fall

Falling, gleaming in the sunshine,

Down upon the fragrant hay

Through the clouds a golden sunbeam,

Changed into an arch of flame. 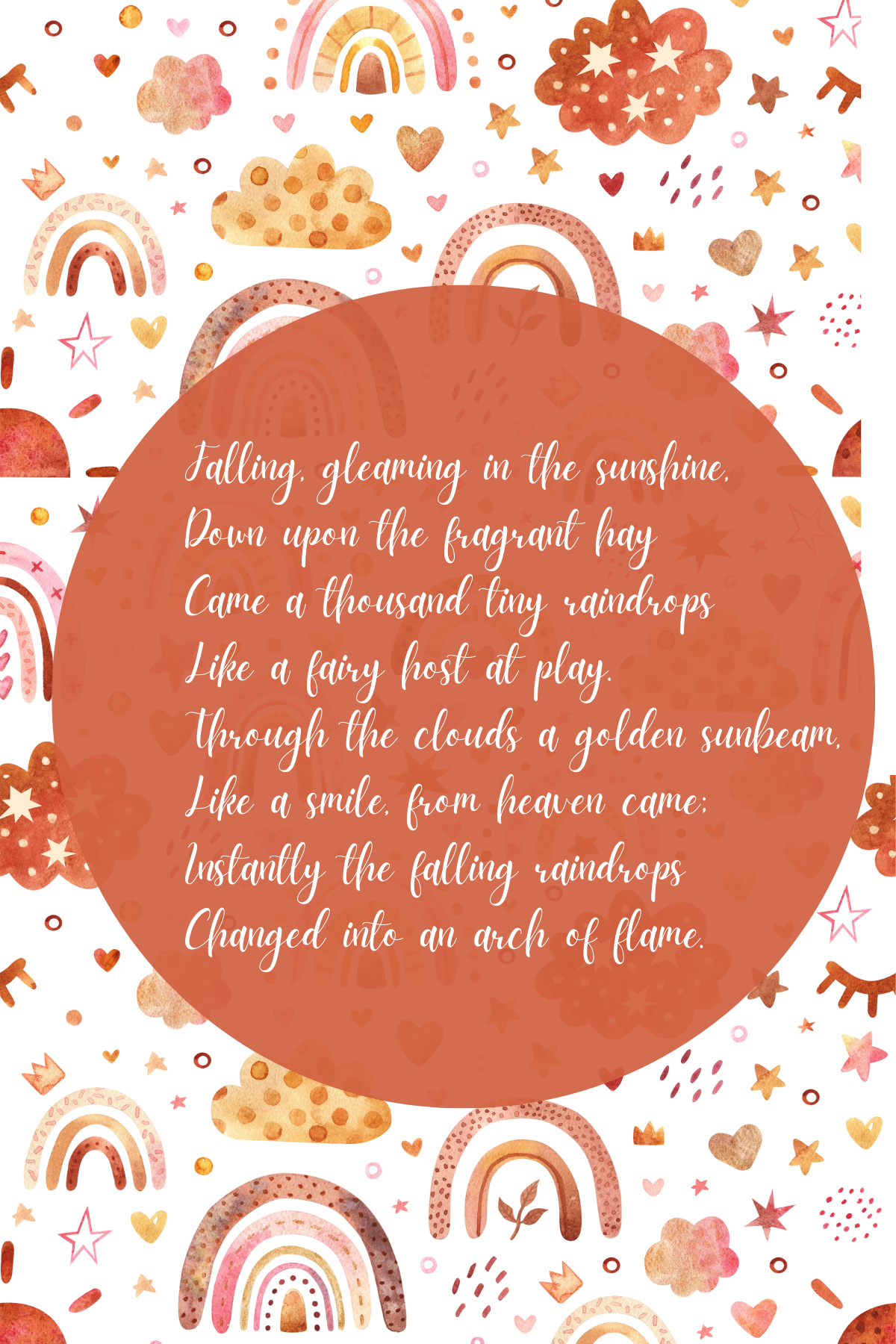 In every memories that

No one can replace

Be with me all the days

Of my lonely life.

Rainbow After the Storm Poems

15. The Rainbow by Emilie Poulsson

When sunshine and rain meet together!

They weave of the drops and the radiance soft

A glorious rainbow that arches aloft,

A rainbow whose wonderful colors amaze,

A shimmering rainbow that fades as we gaze. 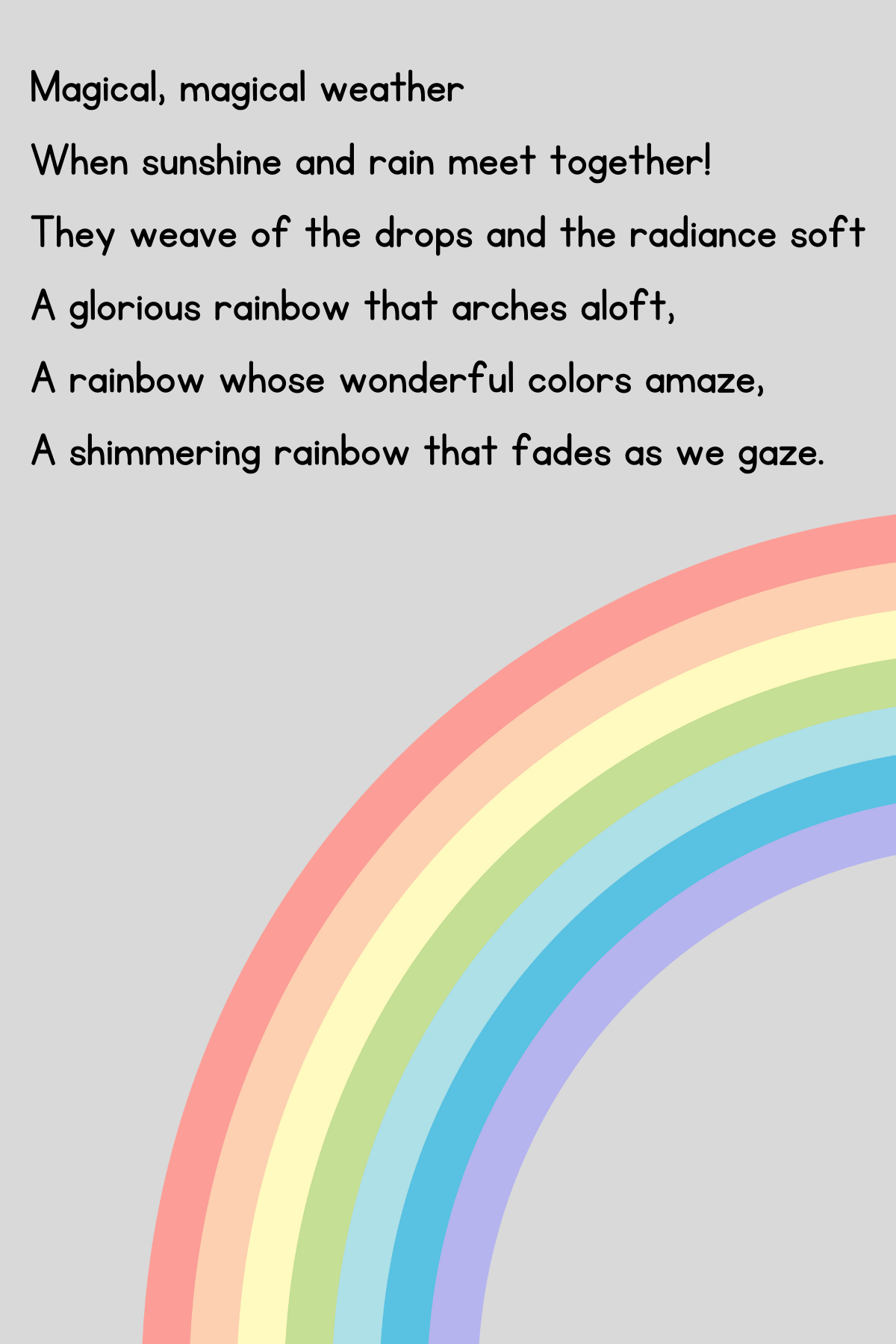 16. On This Long Storm The Rainbow Rose by Emily Dickinson

On this long storm the Rainbow rose—

On this late Morn—the Sun—

The Birds rose smiling, in their nests—

Alas, how heedless were the eyes—

On whom the summer shone!

The quiet nonchalance of death—

17. The Sea Of Glass by Ezra Pound

I looked and saw a sea

roofed over with rainbows,

In the midst of each

Then the sky was full of faces

with gold glories behind them. 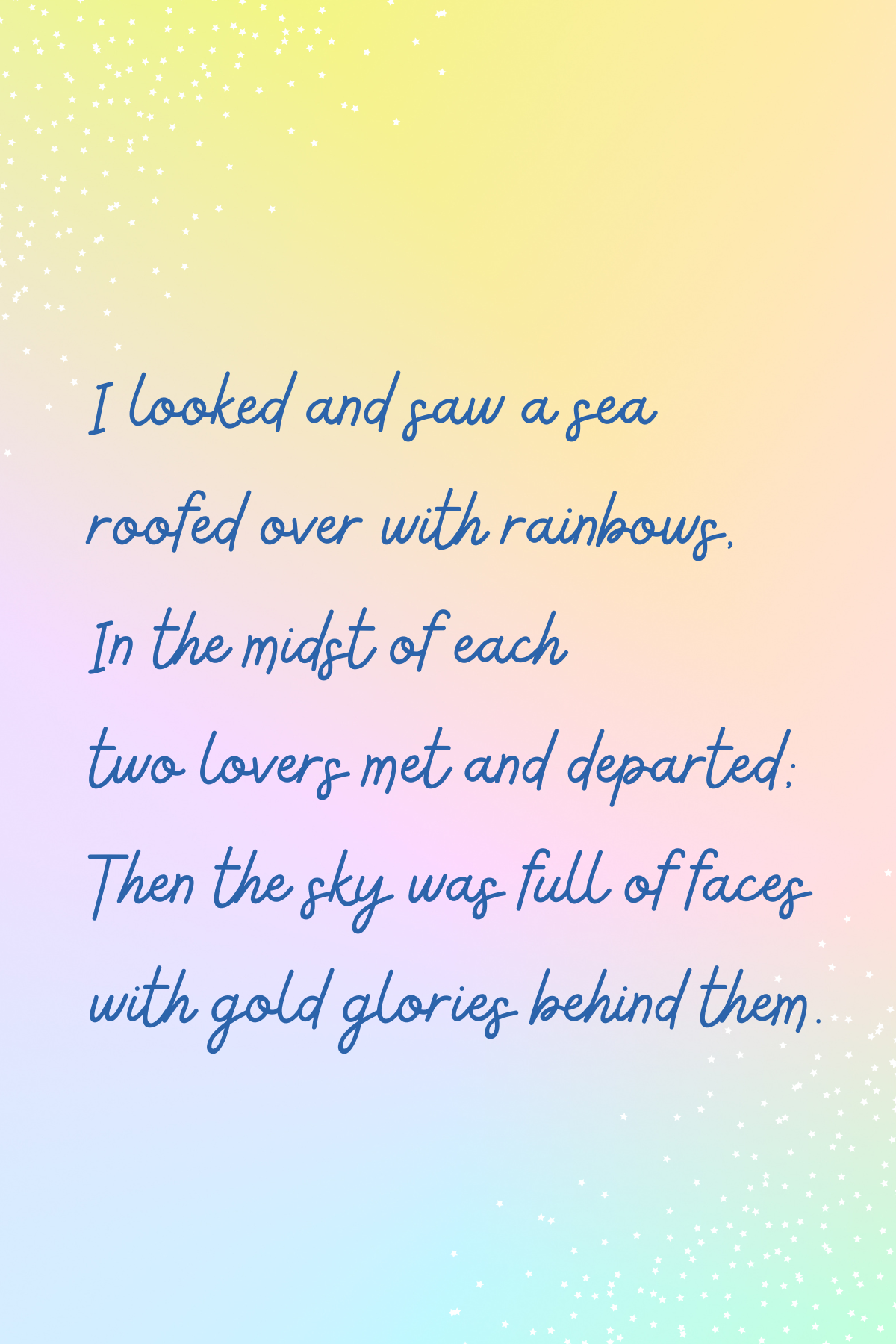 18. The Rainbow by Effie Waller Smith

Love is a rainbow that appears

All varied colors of the light

Within its beauteous arch unite:

If love’s clear rainbow did not gleam!

19. The Rainbow by John Keble

A fragment of a rainbow bright

Through the moist air I see,

All dark and damp on yonder height,

All bright and clear to me.

An hour ago the storm was here,

The gleam was far behind;

So will our joys and grief appear,

When earth has ceased to blind.

Grief will be joy if on its edge

Joy will be grief if no faint pledge

Be there of heavenly day.

It struts peacock-like when the rains have gone,

but visible from only the one side,

to folk who from behind sun shines upon,

those facing its bright rays will be denied.

Get closer, as the superstitious do,

and hopes arise with each step they draw near,

in vain seeking treasure, although they knew

the closer they get, it would disappear.

From far off we must seem the happy pair,

our faithfulness tied bow-like round the years,

but close up lie the strains, the wear and tear,

Our hearts not washed in seven coloured stain

21. A Rainbow Foundation by Anonymous

Once a spider built a cobweb on a rainbow bright and gay,

For she thought its brilliant colors would entice her lawful prey.

But, alas! the sun descended, and the bright bow was no more.

And the weeping, webless spider was left homeless as before.

“After this,” I heard her mutter to herself, “I’ll be content

With foundations not so showy, but more firm and permanent!”