Inside: Dragon Poems that will take your breath away.

Dragons are one of the most interesting mythological creatures. Dragons exist in mythology of various different cultures from ancient times, and have inspired so many iconic poems, books and movies.

Why are dragons so popular? They are large mystical creatures, dangerous, intelligent and mysterious.

Humans are drawn to mystery and drama, and the draw to dragons is no different. We hope you enjoy these Fiery Dragon Poems! 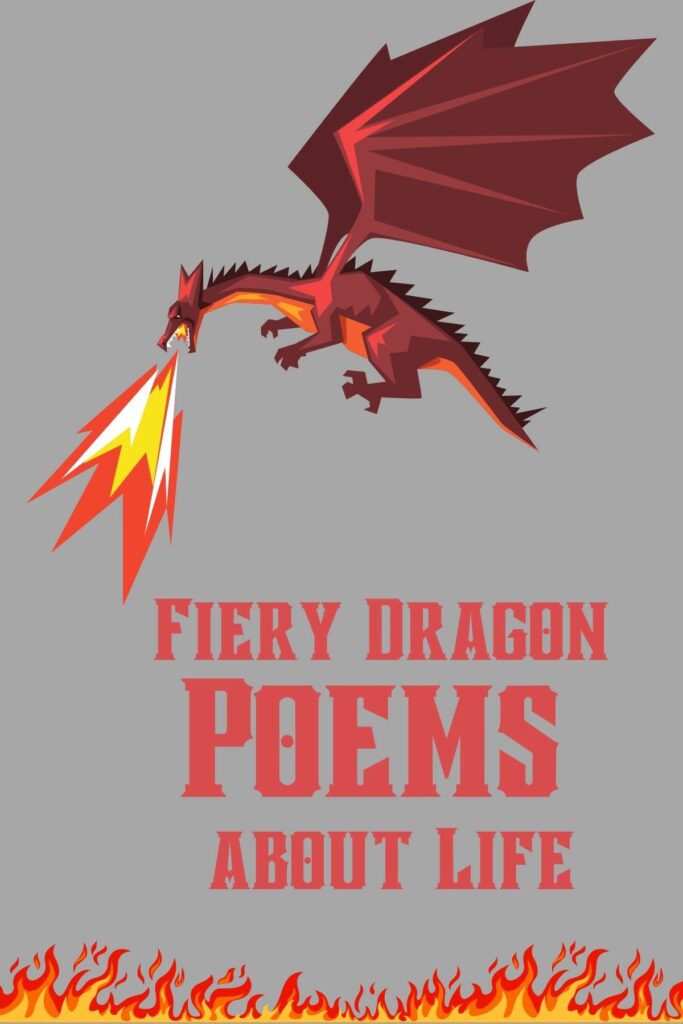 I’m tired of being a dragon,

Ferocious and brimming with flame,

The cause of unspeakable terror

When anyone mentions my name.

I’m bored with my bad reputation

For being a miserable brute,

And being routinely expected.

To brazenly pillage and loot.

I wish that I weren’t repulsive,

With talons designed to dismember

And fangs finely fashioned to pierce.

I’ve lost my desire for doing

The deeds any dragon should do,

But since I can’t alter my nature,

I guess I’ll just terrify you.

In a faraway, faraway forest

Lies a treasure of infinite worth.

But guarding it closely forever

Looms a being as old as the earth.

Its body’s as big as a boulder,

And armored with shimmering scales.

Even the mountain tops tremble when

Its eyes tell a story of terror,

They gleam with an angry red flame

As it timelessly watches its riches.

And the Dragon of Death is it’s name.

Its teeth are far sharper than daggers.

It can tear hardest metal to shreds.

It has seven mouths filled with these weapons,

Each head is as fierce as the other,

Each head breathes a fiery breath.

And any it touches must perish,

Set ablaze by the Dragon of Death.

All who have foolishly stumbled

On the Dragon of Death’s golden cash

Remain evermore in that forest,

Nothing left of their bodies but ash.

I am an unquenchable fire,

The center of all energy,

I am truth and light,

I hold power and glory in my sway.

I have been chosen

To tame the Fates. 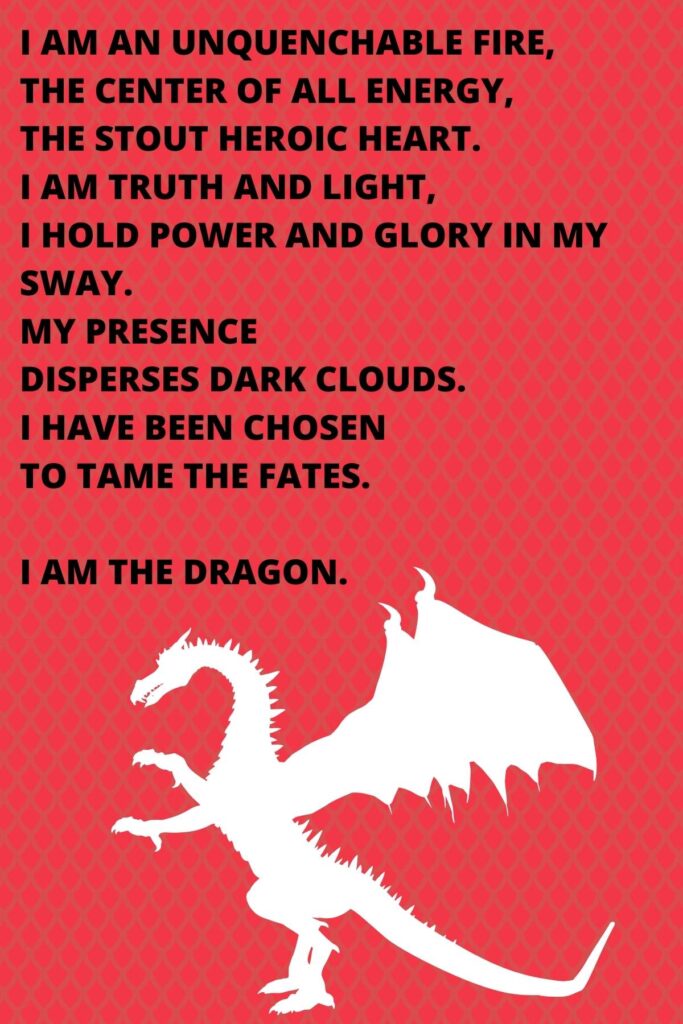 I AM THE DRAGON.

the dragon flies forward, dodges the hurdles, ducks the bars

its future ahead, but it is the end

will the past slow him enough?

Hope that you may understand!

What can books of men that wive

Sea-nymphs in their pearly waggons

Do, but awake a hope to live

The Powers whose name and shape no living creature knows

Have pulled the Immortal Rose;

And though the Seven Lights bowed in their dance and wept,

His heavy rings uncoiled from glimmering deep to deep:

When will he wake from sleep?

Great Powers of falling wave and wind and windy fire,

With your harmonious choir

Encircle her I love and sing her into peace,

That my old care may cease;

Unfold your flaming wings and cover out of sight

The nets of day and night.

Dim Powers of drowsy thought, let her no longer be

When winds have gathered and sun and moon burned dim

Above its cloudy rim;

But let a gentle silence wrought with music flow

Whither her footsteps go.

There was an old dragon under gray stone;

his red eyes blinked as he lay alone.

His joy was dead and his youth spent,

he was knobbed and wrinkled,

and his limbs bent in the long years to his gold chained;

in his heart’s furnace the fire waned.

silver and gold he would snuff and lick:

he knew the place of the least ring

beneath the shadow of his black wing.

Of thieves he thought on his hard bed,

and dreamed that on their flesh he fed,

their bones-crushed, and their blood drunk:

his ears drooped and his breath sank.

Mail-rings rang. He heard them not.

A voice echoed in his deep grot:

a young warrior with a bright sword

called him forth to defend his hoard.

His teeth were knives, and on horn his hide,

but iron tore him, and his flame died.

Receeding into the caves of Mount Athanaton

Stands the Dragon of the Cloak

Holding a flickering remnant of time in his whithering talons.

The creature’s form brought forth by the candle’s dancing light.

Glazed eyes, of a marble’s cold stare, is the extent of his sight.

Feeling the essence of his everlasting presence,

Hurling the cloak to asphixiate my senses.

My ignored consent demands all focus on him,

As miscellaneous thoughts spin in a vertigo devoid of whim.

Within the walls of a wind-worn cavernous dwelling,

Seeping out as a slithering mist to continue this silent fortelling,

A low tonality, of an infrasonic melody, beyond empirical reach.

Periodically extracted from a domestic domain

But the time-keeper’s entity is all but distant from me.

Visions of a wax-drippen floor brought forth clues toward my demise.

A life long death sentence exposed to my eyes.

The blood-line of youth left trailing behind.

A twist of his wrist constricted my time.

The mind I once controlled now he holds in his sickle-clawed traps.

Fleeing through the forest’s deathwish, served to me on a graven plate.

Reminding me of its extinction that will one day seal my fate.

And whenever he wants,

He shows what is left of me.

Though I rarely see him, I know when he’s near

Persistently repeating a phrase only I can hear.

A distant bellowing from his haggard snout,

These mortifying words into my ear…

“Your Time Is Running Out”

Out in the courtyard there is a fountain that’s shaped rather massive,

The body is large, the scales sculpted by an artist,

The face is remarkable, Its eyes follow as people pass it.

The mouth and teeth can be frightening, I’m sure, but everyone loves it, our dragon.

You can’t seem to look away,

Oh, did I mention,

that if you look close enough, the dragon breathes and sways!!

Wild imaginations and children of all ages,

give life to our dragon, like a book with a million pages!!

If you love dragons, and I am sure that you do,

The dragon fountain will make your fondest dreams come true. 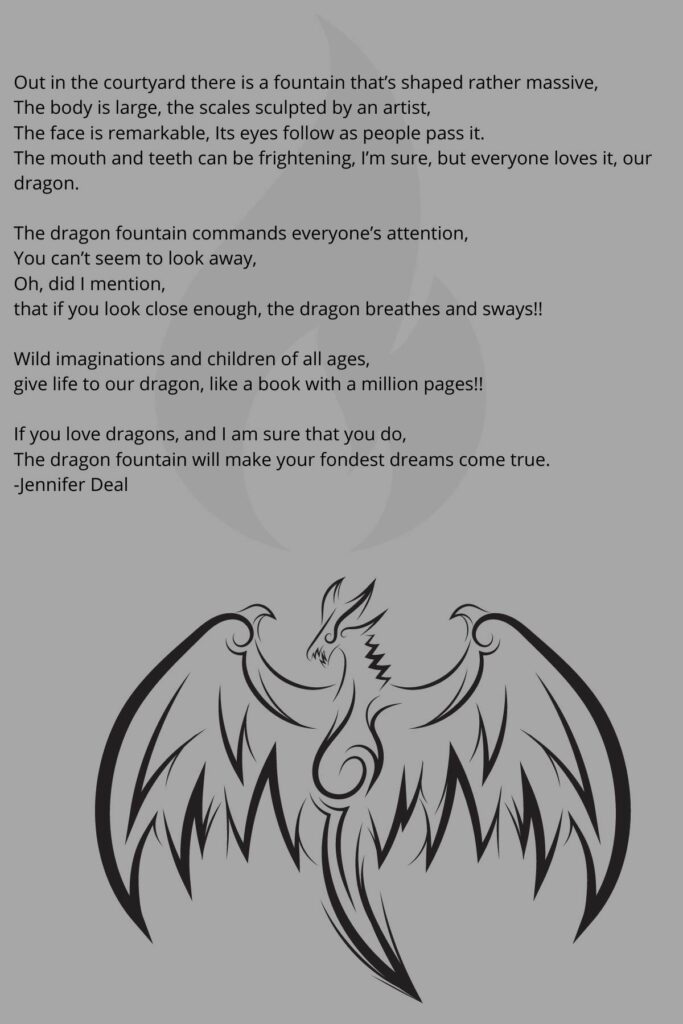 In my garden late at night,

It is a wondrous sight,

You can see the tiny dragons taking flight,

that i may join them nightly.

The crickets play their joyful tune,

The dragons fly and the fairies dance,

underneath the light of the moon,

Their laughter puts me in a trance.

I can not move my eyes away from their show,

I never want them to go away,

when the sun rises they all know,

They must leave to return another day.

Oh how i wish i could watch each and every night,

just to see the dragons and fairies of my dreams take flight.

Claws of Iron, Scales of Gold.

Turns her head to gaze at night.

There is no moon within her sight.

She knows tonight she won’t be found.

Her wings raise her from the ground.

The dark land below drops out of sight.

She soars towards mountains, tall in the night.

But alas, she knows she will soon fade away,

Born of the night, yet dying by day.

Life fills her heart, as the air fills her wings.

And she opens her jaws, and she silently sings,

“Free for the night, wishing for always.”

But the light is dawning with chill morning haze.

Then the pages are closed, and the Dragon is caged.

She is just a memory, there on the page.

And I beg of you reader, free her, my friend.

Open the pages, let this not be the end.

Perched high, drops of mercury fell upon her glistening back. All of life had come to a standstill, all of life was crowded onto a single point.

One claw teetered over the edge, right wing held out for some balance. She saw him, circling mid-air, silvery-black in the distance.

The city was depending on them. Here they were, leaving.

Let’s go, he cried out to her.

With a last look at the city they had spent the last 16 winters in, she took off into the starless, midnight amber sky.

With them, Hope was gone.

The History of Dragons in Art

Eyes of a child,

Smile of an angel,

A heart filled with dragon’s fire.

Run swift as a stallion,

Your breath as deep as a ravine.

Oh what tangled webs we weave in life,

That is in the abyss of your soul.

To a baby’s laugh.

Night falls upon my eyes as I wait for death.

No more pain I say to that I know.

The pain he feels in his dragon heart,

He must surely say no more.

Though night is day,

And day is night,

A dragon sleeps through a winter’s dawn.

The howl of a wolf silences the dusk.

As the dragon’s eyes swirl with fire,

I can feel his flame all around me,

Yet I do not burn,

For I am a dragon’s child.

We sleep with the dragons,

in the hidden lair.

We sing their call,

in our every prayer.

their world is clear.

our heart can hear.

They guide our way,

through the darkest night.

We use their wisdom,

to give us sight.

you hear their cries.

Their fire can be seen,

deep in our eyes.

deep in our minds.

In us the dragon, 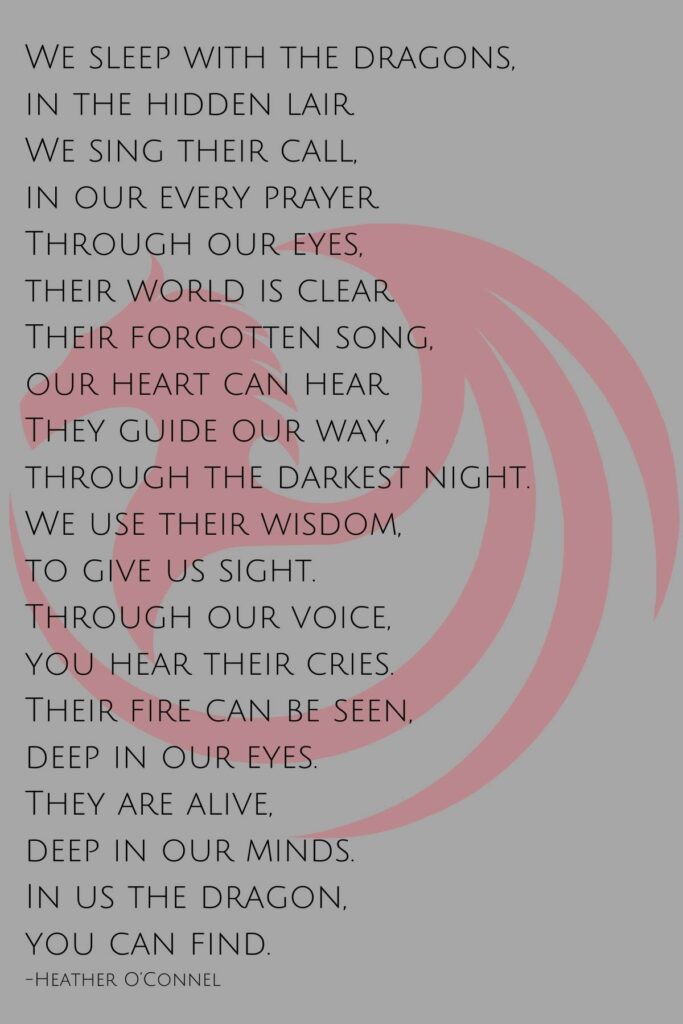 Sleeping now, but when it wakes,

starts up storms and makes earthquakes.

Gardens where the dragon snaps.

Dragon on a Chinese robe.

Dragon as a kids’ cartoon.

Origin of word ‘dragoon’. Dragon that the hero slew.

Biggest thing that ever flew.

Dragon landing on your roof.

The dragons life and soul

Are turning into mine

The dragons mind and wisdom

Are coming forth as one

The dragons strength and virtue

Are also there for me

For the dragon and myself

Are both becoming free

Of the mighty dragon —

The color in his eyes

Of hope and promise.

A tale of greed and pain.

Of love, and thorns of hate,

Of life and death the same.