Inside: 13 Space Poems for all the astronomy fans out there.

With the release of the Webb Space Telescope images, our fascination with the stars has reached new heights. Exciting new discoveries are being announced daily, with scientists learning of new galaxies, stars and even Jupiter.

There is so much beauty in the stars, and so much mystery. It’s no wonder that we are fascinated by what we can – and can’t – see with the human eye.

The beauty of the planets has of course served as a muse to poets for decades. 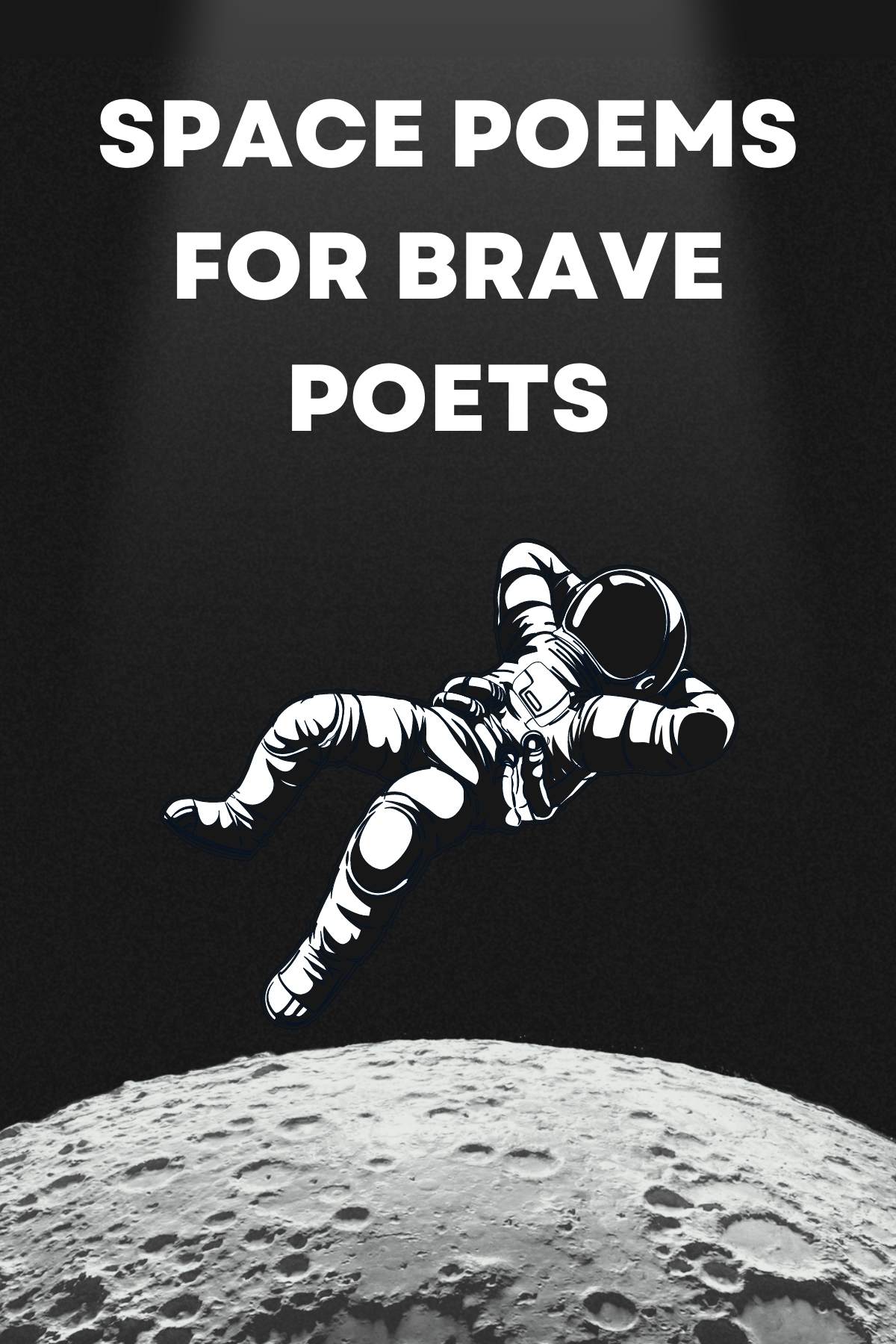 We are happy to share with you these 13 Space Poems for Brave Poets. We have they send you to another dimension!

Out of This World Space Poems

Torrent of light and river of the air,
Along whose bed the glimmering stars are seen
Like gold and silver sands in some ravine
Where mountain streams have left their channels bare!
The Spaniard sees in thee the pathway, where
His patron saint descended in the sheen
Of his celestial armor, on serene
And quiet nights, when all the heavens were fair.
Not this I see, nor yet the ancient fable
Of Phaeton’s wild course, that scorched the skies
Where’er the hoofs of his hot coursers trod;
But the white drift of worlds o’er chasms of sable,
The star-dust that is whirled aloft and flies
From the invisible chariot-wheels of God.

What If
There was a planet full of rainbows

What If
There was a star made of cheese

What If
There was a comet with an ant farm

What If
There was a moon with yellow trees

What a fun dream that would be
-Megan L 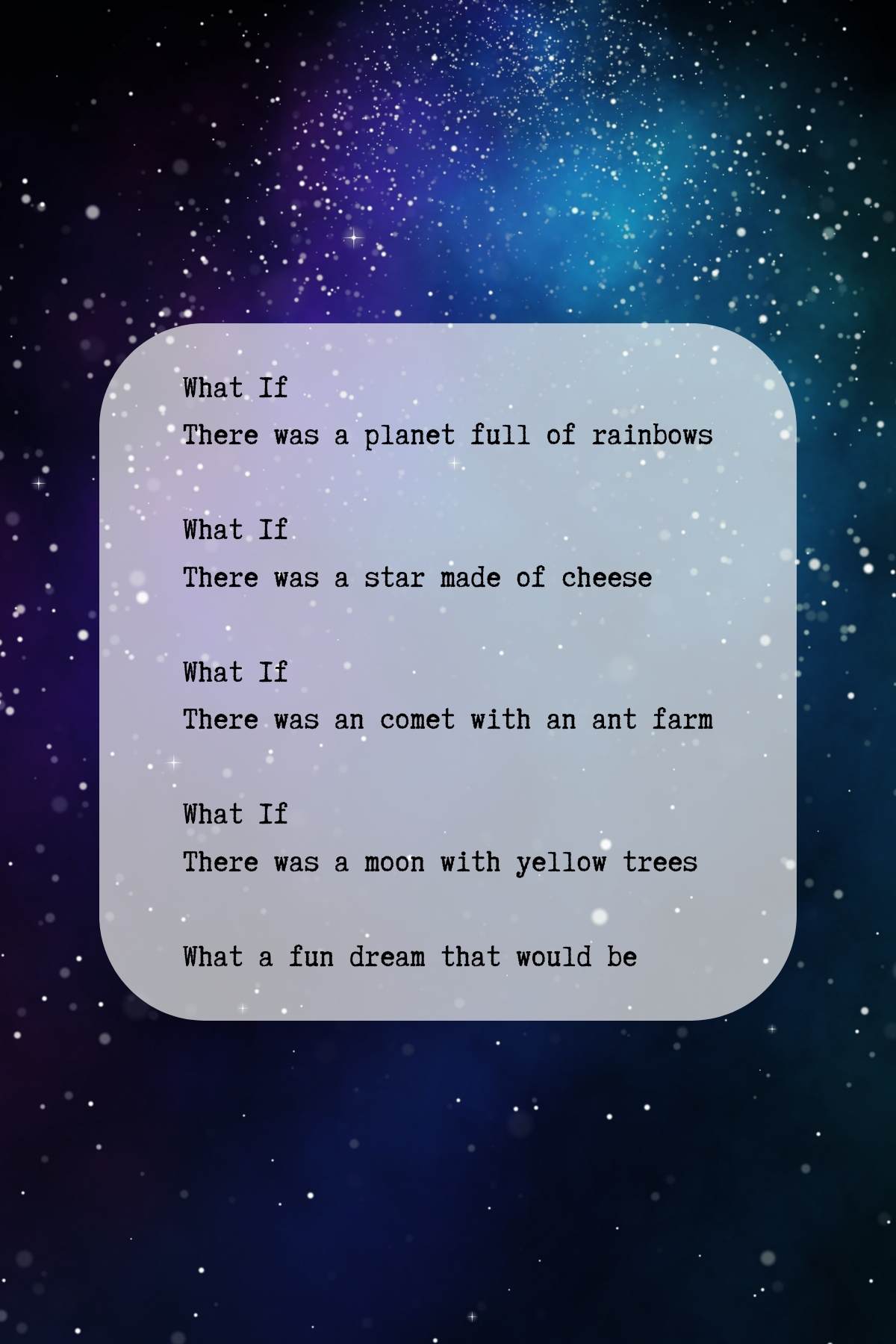 The Comet! He is on his way,
And singing as he flies;
The whizzing planets shrink before
The spectre of the skies;
Ah! well may regal orbs burn blue,
And satellites turn pale,
Ten million cubic miles of head,
Ten billion leagues of tail!
-Oliver Wendell Holmes Sr.

Galaxy Poems That Will Send You Into Orbit

Ah, Moon—and Star!
You are very far—
But were no one
Farther than you—
Do you think I’d stop
For a Firmament—
Or a Cubit—or so?

I could borrow a Bonnet
Of the Lark—
And a Chamois’ Silver Boot—
And a stirrup of an Antelope—
And be with you—Tonight!

But, Moon, and Star,
Though you’re very far—
There is one—farther than you—
He—is more than a firmament—from Me—
So I can never go!
-Emily Dickinson

I, who is staring at the night sky,
Wondering if everything will be fine.
Beautiful stars made the evening bright,
Will never be the same without the light.

The beauty that caught my attention,
Feeling of emotional connection.
I wanted to give it my affection,
And relieving the ferocious corrosion.

Shining bright as the quasar,
Can be seen, even though it is so far.
Having the uniqueness of a pulsar,
No one will ever be on par.

Things that remained unknown.
The universe that which has grown.
More mysteries that are yet to be known,
Like the history of the pre-historic bones.

You, who are zooming like a shooting star,
Started the throbbing of my heart.
You are turning into a neutron star,
Pulling me closer like a magnetar.

The world that has no reverse.
Started changing after the converse.
One’s known as the universe,
Has now split into a multiverse.
-John Gabriel Nermal

Look at the stars! look, look up at the skies!
O look at all the fire-folk sitting in the air!
The bright boroughs, the circle-citadels there!
Down in dim woods the diamond delves! the elves’-eyes!
The grey lawns cold where gold, where quickgold lies!
Wind-beat whitebeam! airy abeles set on a flare!
Flake-doves sent floating forth at a farmyard scare!
Ah well! it is all a purchase, all is a prize …
-Gerard Manley Hopkins 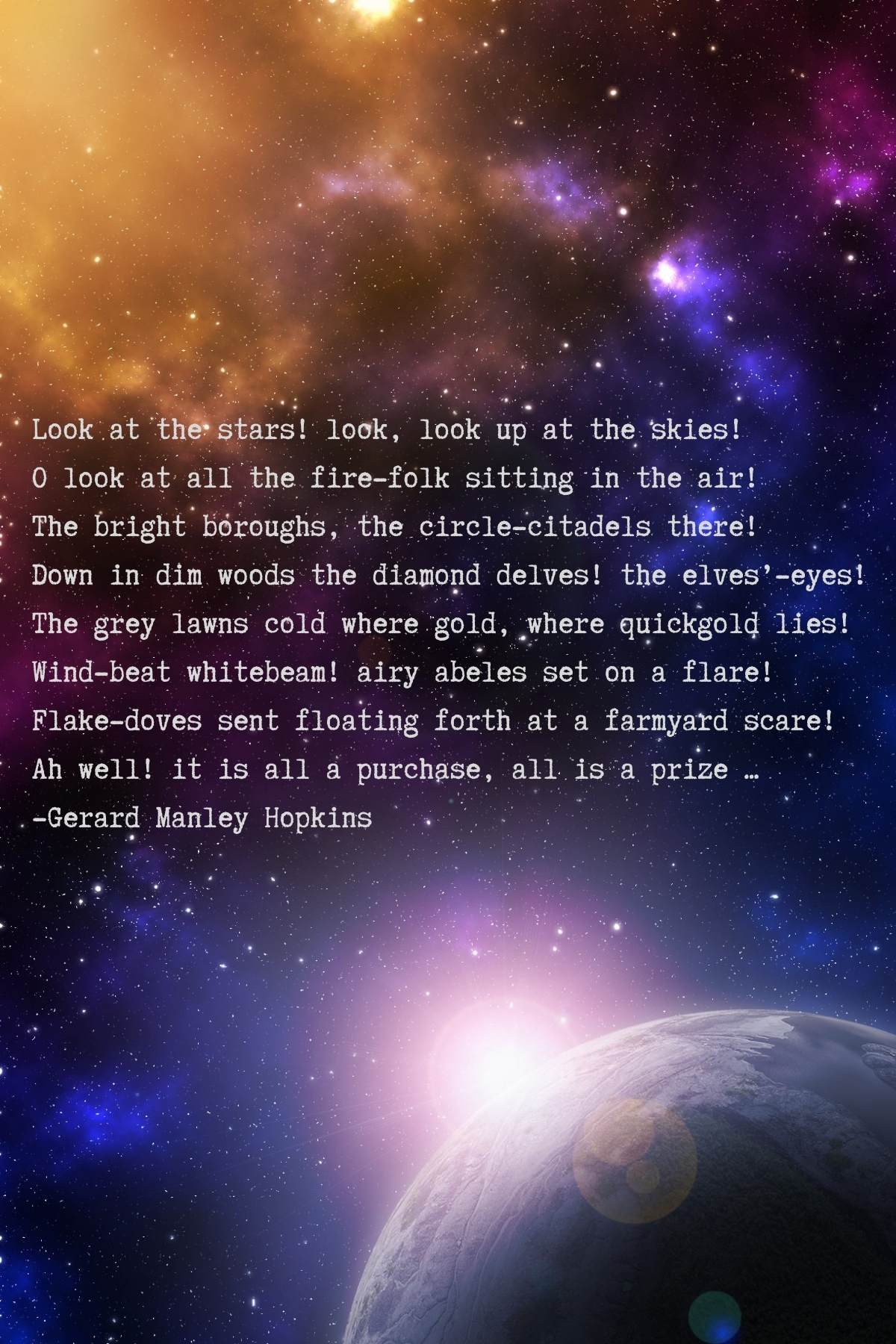 ‘When one’s contemplating a mystery,’
said Einstein in musings e’er apropos,
‘such as how to fathom or seek to know
reality, much less eternity,’

‘one can’t help but be overcome with awe,’
to phrase his passage my verses to fit.
In striving to grasp a little of it
and witness a bit of what Einstein saw

he says we must stop feeling separate,
a sense that’s optically delusive
and nurture a vision more inclusive
by making an effort deliberate.

Once there was a little dream
That mounted to the sky;
It rode upon a water beam
And climbed the star way high.
But when it wanted to come home
Along the silver track
The lights had all gone out, and O!
It never could get back.
And you may look now any night,
And see it if you will,
A gauzy milky veil of light,
That’s hanging up there still.
-Annette Wynne

I am the planet
not this individual
reaching for the sun

I am the cosmos
not this individual
orbiting the sun

I am the I am
not this individual
baptized in the sun
-P.M. Richter

Space Poems to Make You Smile

The Big Dipper spilled stars down over the roofs,
I felt the way the wind whirled stars
Over the town roofs. . . .
I felt the town asleep:
I felt people there in the great crisp dark.
When morning came in a waver of light
There was a breath of change … all the dreams going away from the dreamers
As dreams do go away in the morning.
A ring of hills . . . one river . . . some streets
Make a design.
Stars make a design
And it is a Big Dipper
Or the Pleiades like a bunch of grapes. . . .
It is harder to say what the roofs mean:
I don’t know . . .
Maybe I’m not yet far enough
Away.
-Hilda Conkling

And in the end
We are only atoms,
Drifting alone,
Desparate for
Something to
Cling on to.
-David Jones

We have calcium in our bones,
iron in our veins,
carbon in our souls,
and nitrogen in our brains.
93 percent stardust,
with souls made of flames,
we are all just stars
that have people names.
-Nikita Gill 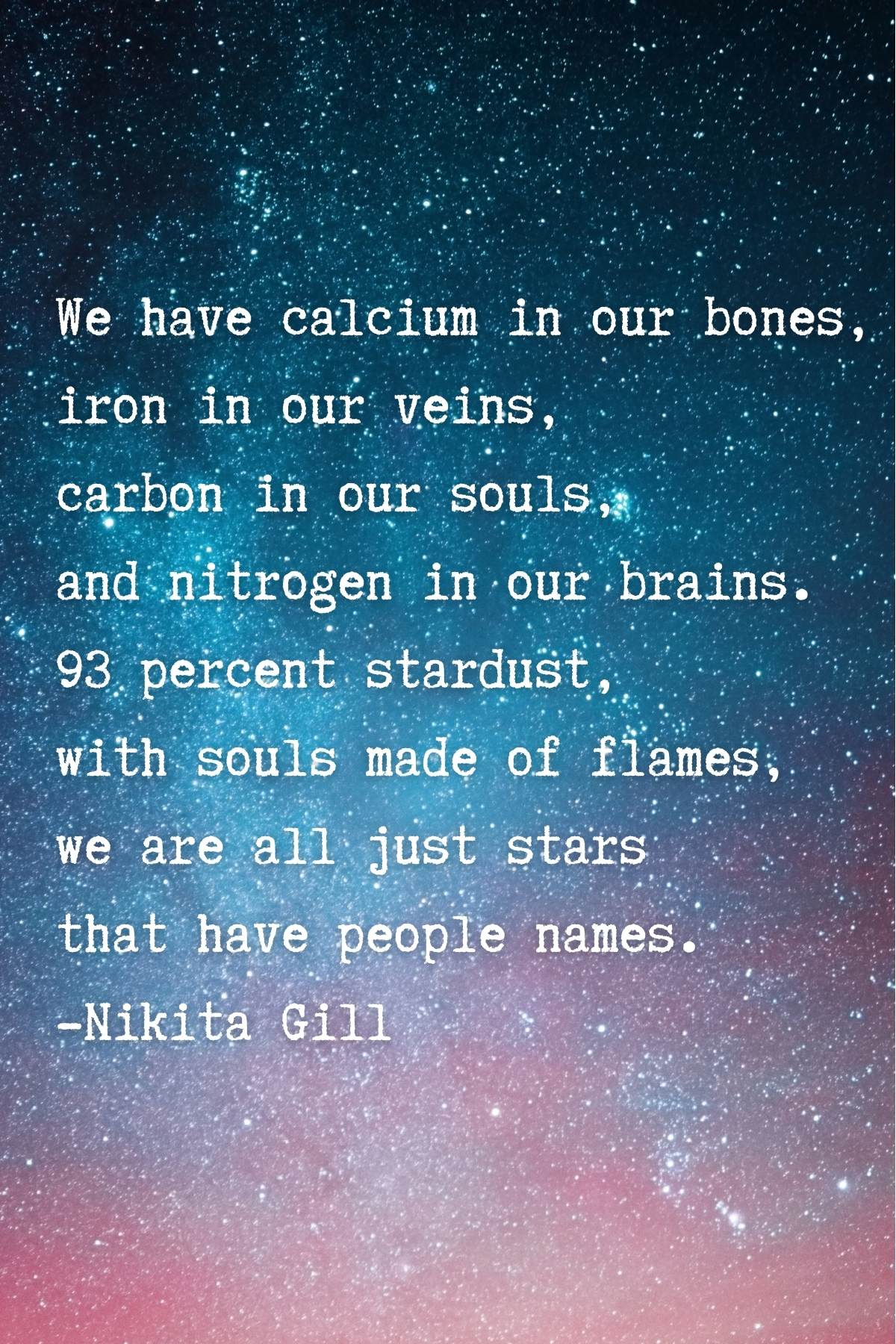