Inside: 17 Poems About Bullying To Help You deal.

We all know how detrimental it can be to someone’s self esteem and feelings to have mean words said to them whether it be at school, at home, online or anywhere else. While getting bullied absolutely does stink and can make you feel really down about yourself, know that you are never alone.

We have put together a list of 17 bullying poems that range from what it feels like to get bullied to how to overcome and understand that all those bullies will ever be is a bully.

If you or someone you know is experiencing bullying, know that there are actions that can be taken against it to help you out. Stopbullying.gov has plenty of resources to help you navigate what to do.

If you are struggling with a bully, these poems will hopefully make you feel less alone and encourage your strength to overcome them. 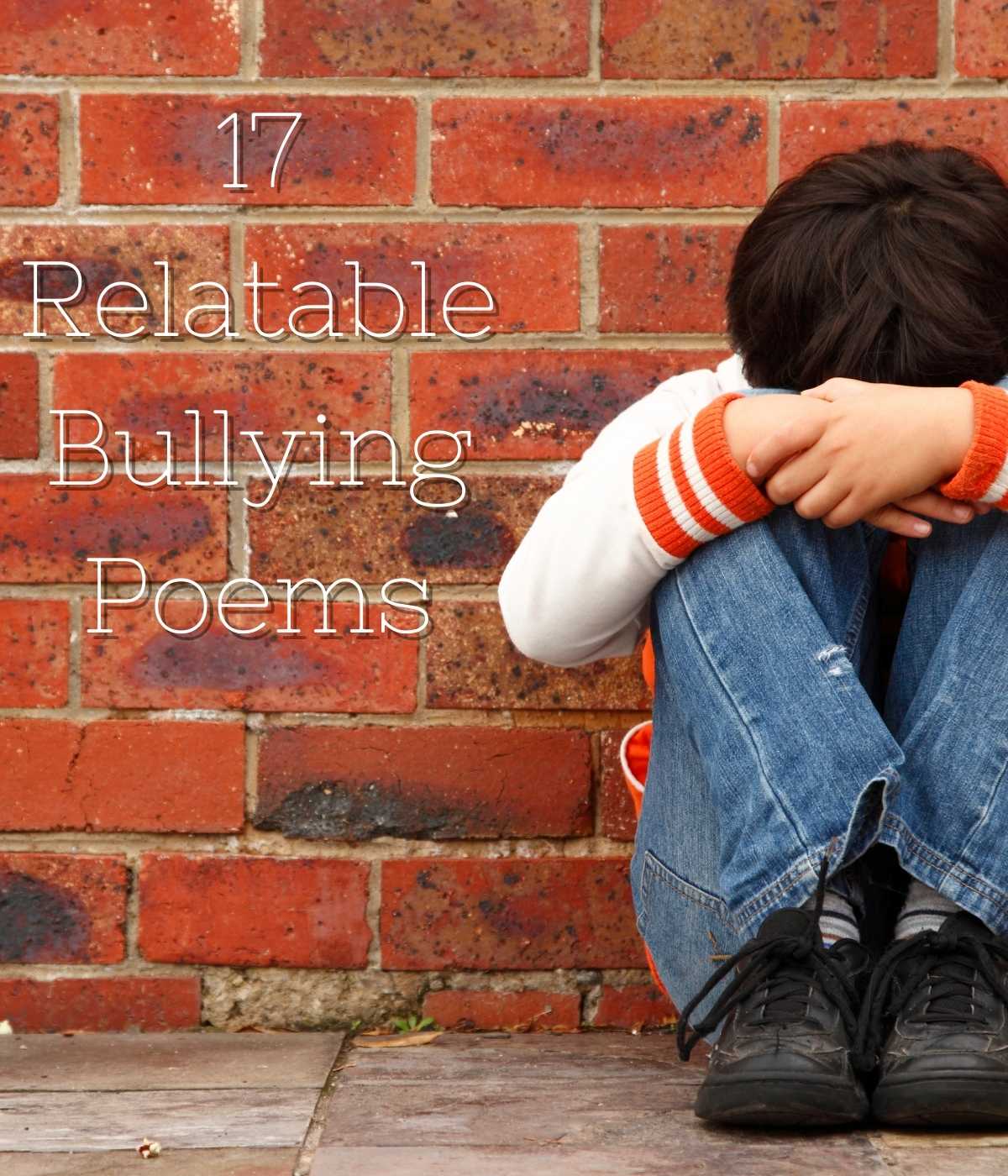 These poems are inspiring works of art that shed light on the issue of bullying.

1. I’ll Be There For You: This is a fabulous poem that promotes inclusiveness and puts down bullies in any form as well as letting the person getting bullied know that there is always someone there for them.

2. No Need For Mean: A simple rhyme scheme that explains why bullying is wrong and explains that we should all be nice and play with each other rather than be mean.

God made us all individually different,

Watch the comments that you write,

It’s not about black or about white,

It’s all about doing what’s right.

You see bullying, stop it on sight.

They feel at the end of the night.

This song was meant to enlight,

Because 1 out of every 3 students get picked on to fight,

4. “The Bully” by Clare Bevan: This poem is told from the point of view of the bully, showing that people who bully always end up alone because no one wants to hang out with them since they are always being mean to everyone.

5. “What If?” by Jamie L. Firestine: A powerful poem that paints a picture for the bully about how they make people feel. But what if the shoe were on the other foot, would they still have so many mean things left to say?

6. “The Forgotten Ones” by Corinna H.: This author uses poetry as a way to try and get across to the bully, using her voice to advocate for those being treated unkindly. Letting the bully know that those that they treat so poorly are humans too with feelings and to stop it. 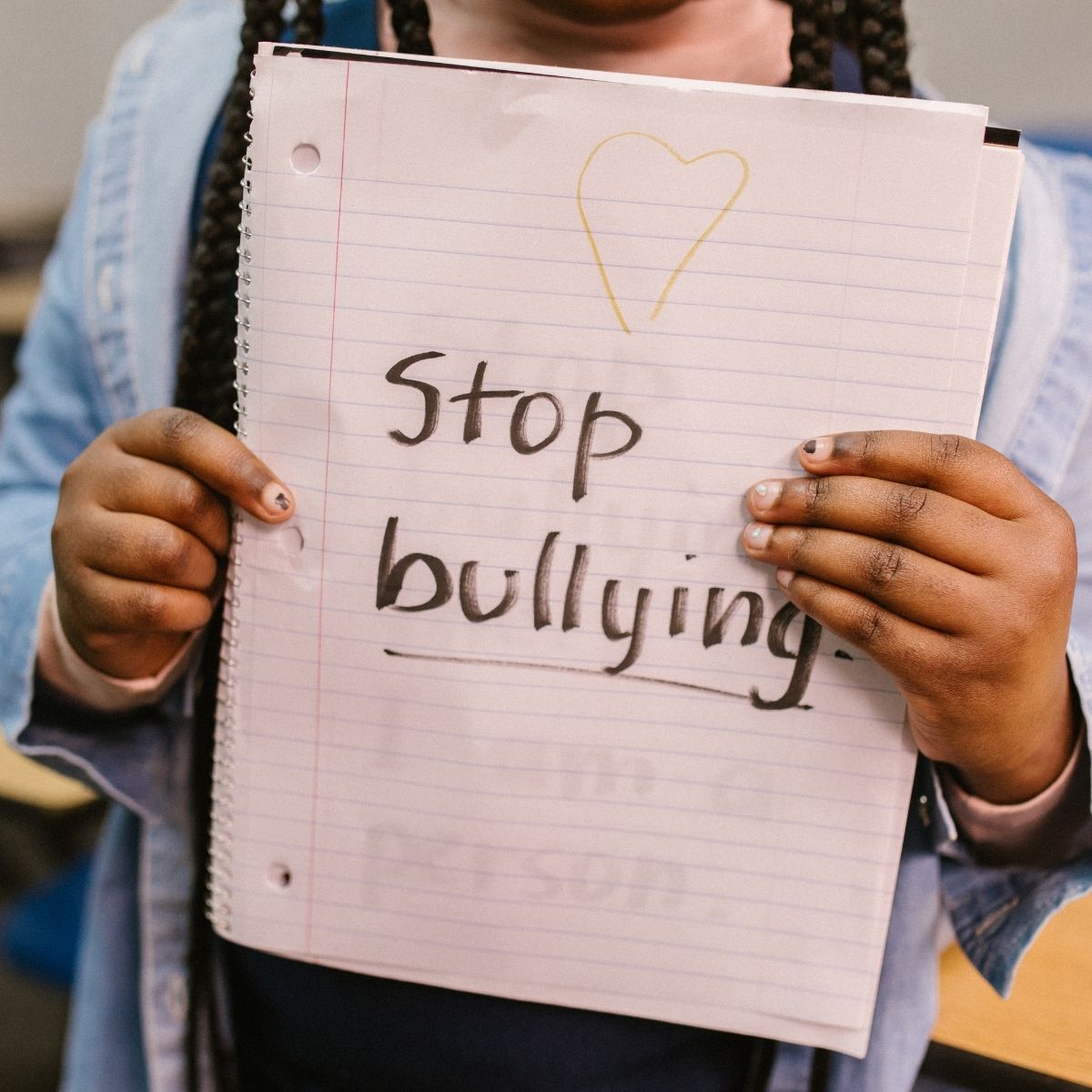 Written from the perspectives of someone being bullied, these poems are achingly beautiful while not shying away from the realities of the consequences.

7. “All I Ask” by Caitlin Dwyer: This is a personal letter to a bully in the form of poetry asking them to please stop being mean to them as they have never done anything to deserve that besides be themselves.

8. “In Support Of Those Kids Who Are Bullied” by Patricia A. Fleming: Written from an outsider perspective, this poem is explaining to a bully the consequences of their actions towards others. How much it hurts them and makes going to school everyday a struggle. This is also a wonderful reminder that no one is ever on the side of the bully, unless they are too a bully themselves!

9. I Am… A Student Being Bullied: Written from the perspective of someone being bullied in school, asking why they are the victim of someone’s meanness and how they are trying her best to ignore it because they know that the bully’s words don’t truly matter.

10. “Somewhere deep inside you

I know this will surprise you—

but I’ve seen it in your face.

Your eyes are often sad, although

you wear a surly grin.

Sometimes when you stand all alone

your ‘mean’ seems worn and thin.

I wish that you would take a step—

a small, but brave on too—

and look inside yourself to find

the good I see in you.”—Eileen Spinelli “Poem for a Bully”

Does it make you feel good making me feel so bad?

Did someone hurt you?

You take it out on me

‘Cause it makes you feel tall.

I bet you’re scared and alone.

If you looked in my eyes, you’d see,

If you need any encouragement or inspiration to keep on going, these poems will help you to do so! 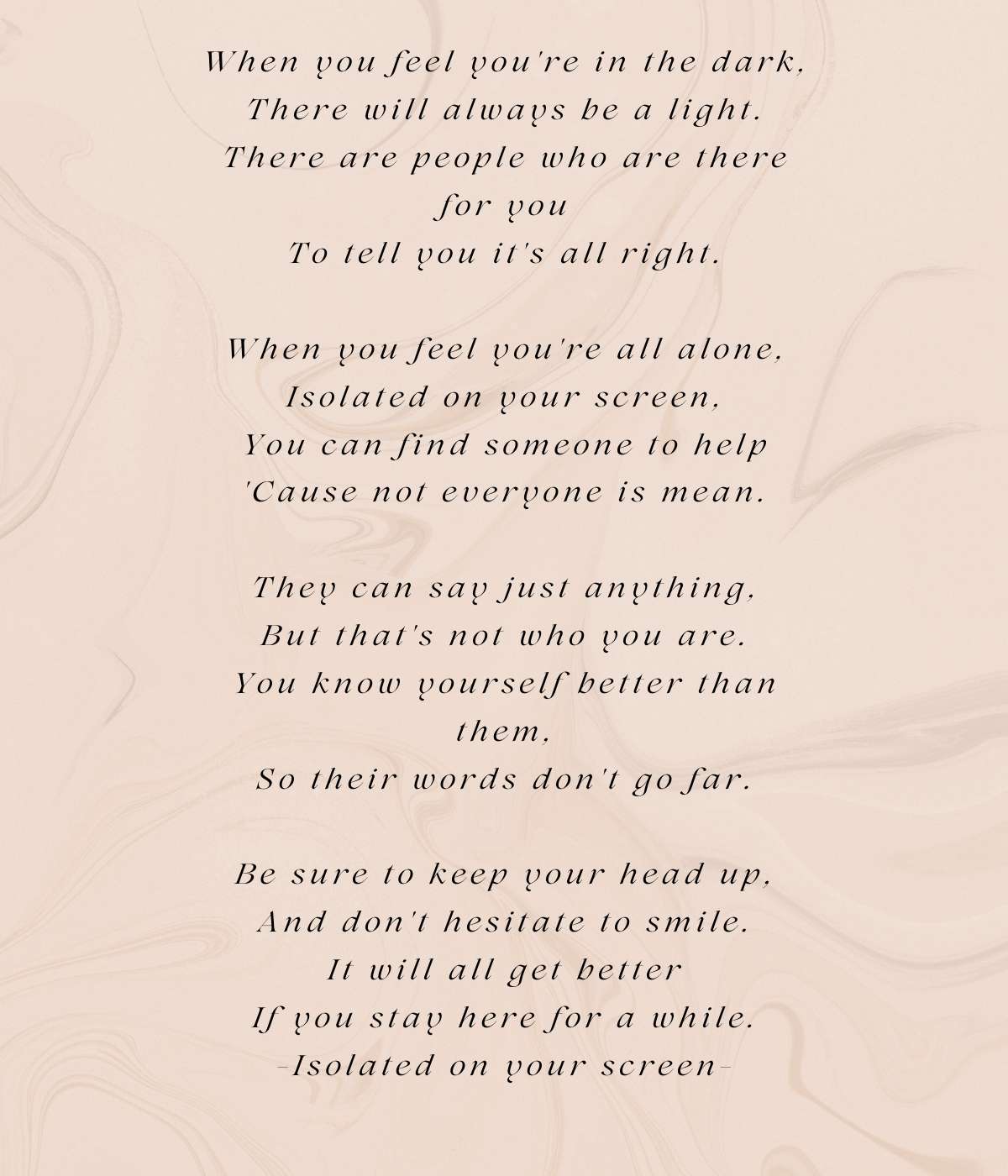 12. Isolated On Your Screen: This poem is written by someone who watched someone get cyber bullied, and this is their message to the victim. They’re letting them know that while right now they may feel all alone and in the dark, that brightness is soon to come and they have people who are there for them.

13. “Why don’t they understand

That we are all the same?

We all feel lost at times.

Why don’t they understand

That someone else’s pain

Is not for gain?

Get out of the way, I’m invincible.

‘Cause the one you wants not around,

It’s not your place

You’ll be the victim

You’re the one who has to live with yourself.”—Aly & AJ “Sticks and Stones”

14. “High School Soldier” by Kierra B.: This poem is encouraging victims of bullying to keep their heads high and kill their bullies with kindness. It lets them know that they are perfect the way they are, that there’s nothing wrong with them, and to stay strong.

15. “Mean Girls” by Sugarland: These lyrics by the iconic band Sugarland are pure poetry! It’s a nice reminder that while girls may be mean to you, you’re definitely not alone, and sometimes girls are just that: mean! So, if you need a little pick me up, blast this song on your speaker and let the lyrics make you feel better.

16. “The Different Path” by Mark Bird: An extremely encouraging poem that lets people who are victims of bullying know that while bullies may try to block their path, they will be the ones who succeed in the end because bullies never come out on top.

And swords and weapons that you use against me.

You have knocked me off my feet again,

You, with your voice like nails on a chalkboard

Calling me out when I’m wounded.

You, picking on the weaker man.

Well, you can take me down

With just one single blow

Someday, I’ll be living in a big old city

And all you’re ever gonna be is mean.

Someday, I’ll be big enough so you can’t hit me

And all you’re ever gonna be is mean.

Why you gotta be so mean?”—Taylor Swift “Mean”