Inside: Short Fishing Poems As Relaxing As Going Out on the Boat.

Fishing combines sport with nature in a very beautiful way. Fishing is not an easy activity, but it does require solitude, quiet and patience. The time between fish bites gives us an opportunity to reflect on life, connect with our fishing partner, and spend time in nature.

Fishing really is a great lesson in patience. It requires you to pay attention to your line and tune out distractions. It also helps us experience a feeling of great satisfaction and achievement when we reel in a great catch.

Whether you’re new or an experienced angler, you will enjoy these Short Fishing Poems. 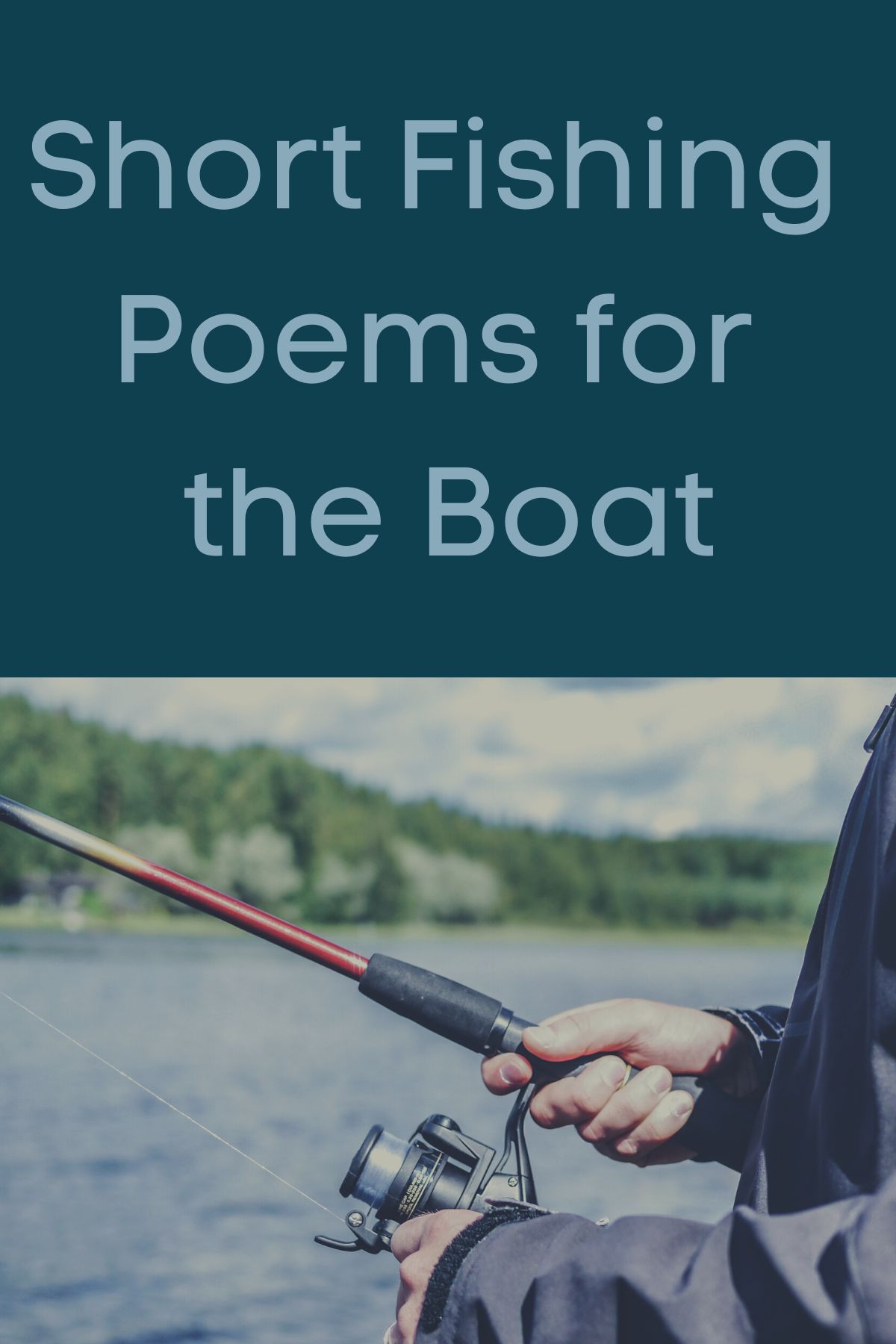 7 Fishing Poems to Flip For

1.Speckled Trout by Ron Rash
Water-flesh gleamed like mica:
orange fins, red flankspots, a char
shy as ginseng, found only
in spring-flow gaps, the thin clear
of faraway creeks no map
could name. My cousin showed me
those hidden places. I loved
how we found them, the way we
followed no trail, just stream-sound
tangled in rhododendron,
to where slow water opened
a hole to slip a line in,
and lift as from a well bright
shadows of another world,
held in my hand, their color
already starting to fade.

2. The Angler’s Invitation by Thomas Tod Stoddart
Come when the leaf comes angle with me,
Come when the bee hums over the lea,
Come with the wild flowers—
Come with the wild showers—
Come when the singing bird calleth for thee!
Then to the stream side gladly we’ll hie,
Where the gray trout glide silently by,
Or in some still place
Over the hill face
Hurrying onward drop the light fly.
Then when the dew falls homeward we’ll speed,
To our own loved walls down on the mead,
There by the bright hearth,
Holding our night mirth,
We’ll drink to sweet friendship in need and in deed.

3. Fishing by A.E. Stallings
The two of them stood in the middle water,
The current slipping away, quick and cold,
The sun slow at his zenith, sweating gold,
Once, in some sullen summer of father and daughter.
Maybe he regretted he had brought her—
She’d rather have been elsewhere, her look told—
Perhaps a year ago, but now too old.
Still, she remembered lessons he had taught her:
To cast towards shadows, where the sunlight fails
And fishes shelter in the undergrowth.
And when the unseen strikes, how all else pales
Beside the bright-dark struggle, the rainbow wroth,
Life and death weighed in the shining scales,
The invisible line pulled taut that links them both.

4. No Seeking, No Losing by Anonymous
An old philosopher in China
Spent all his life in angling;
He thought that there was nothing finer
Than having his line dangling;
He used no bait, he caught no fish
Early or late — ‘t was not his wish.

5. Untitled by Dave Read
floating atop
the surface of the lake
the moon’s
silver coins slip
through his fishing net 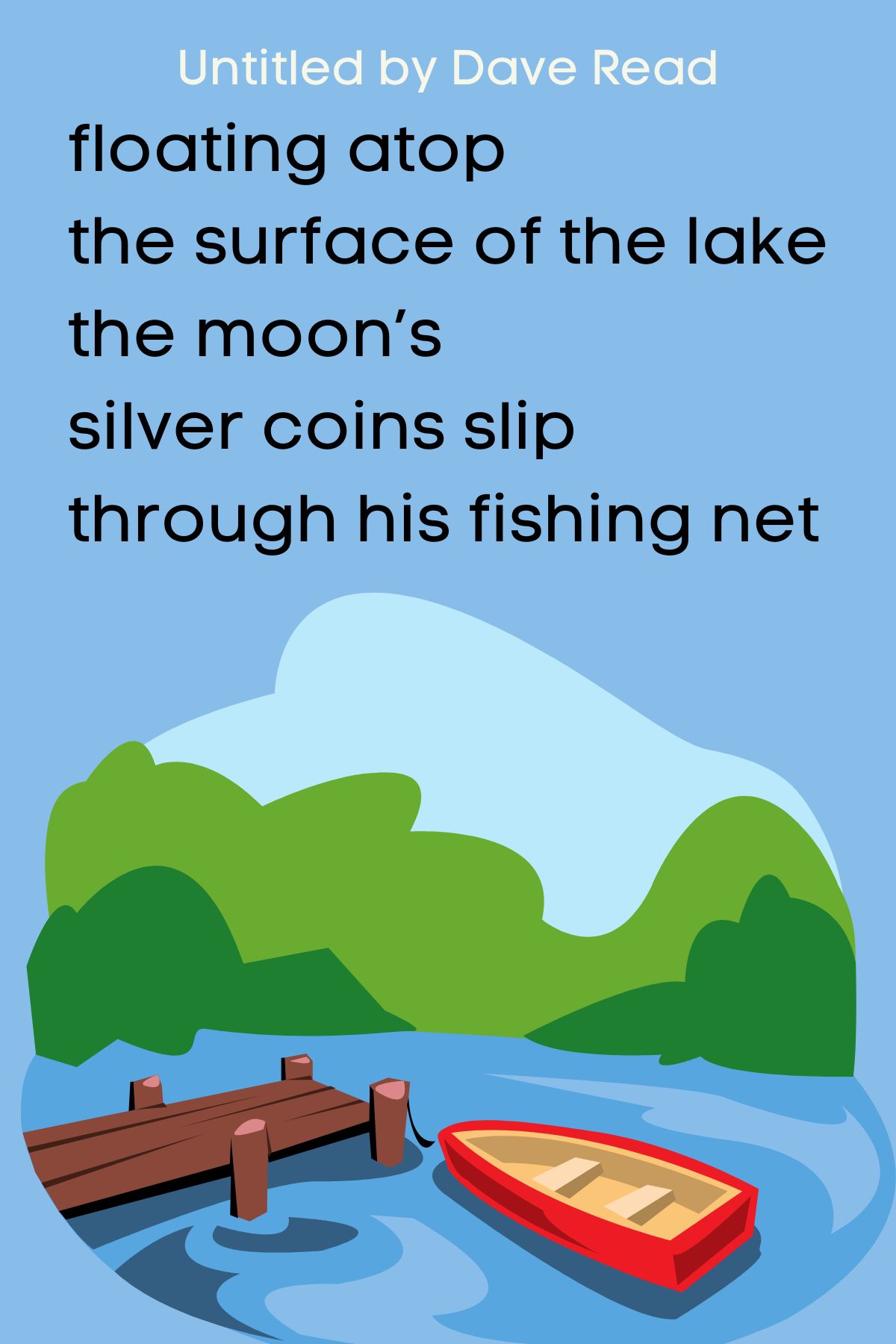 6. The Dissatisfied Angler Boy by Hannah Flagg Gould
I’m sorry they let me go down to the brook,
I’m sorry they gave me the line and the hook,
And I wish I had staid at home with my book.
I’m sure ‘t was no pleasure to see
That poor, little, harmless, suffering thing
Silently writhe at the end of the string;
Or to hold the pole, while I felt him swing
In torture, and all for me!
‘T was a beautiful, speckled and glossy trout,
And when from the water I drew him out
On the grassy bank, as he floundered about,
It made me shivering cold,
To think I had caused so much needless pain;
And I tried to relieve him, but all in vain;
Oh! never, as long as I live, again
May I such a sight behold!
O, what would I give once more to see
The brisk little swimmer alive and free,
And darting about, as he used to be,
Unhurt, in his native brook!
‘T is strange how people can love to play
By taking innocent lives away;
I wish I had stayed at home to-day
With sister, and read my book.

7. God Goes Fishing by Marjorie Maddox
Bamboo stick and he flicks his wrist,
swings the line across continents.
I can hear it swish, slice clouds.
It goes wherever there’s water.
Its hook dangles from the slide at the city pool,
claws at sewer caps, attacks a fireman’s hose.
In the morning, I find it
clipped to the soap dish in my shower:
question mark glistening steam.
I am too busy getting clean to answer.

8. Worm Feed by James Edward Lee
many fishes swim
so wiggle as the worm on
the line giggles so 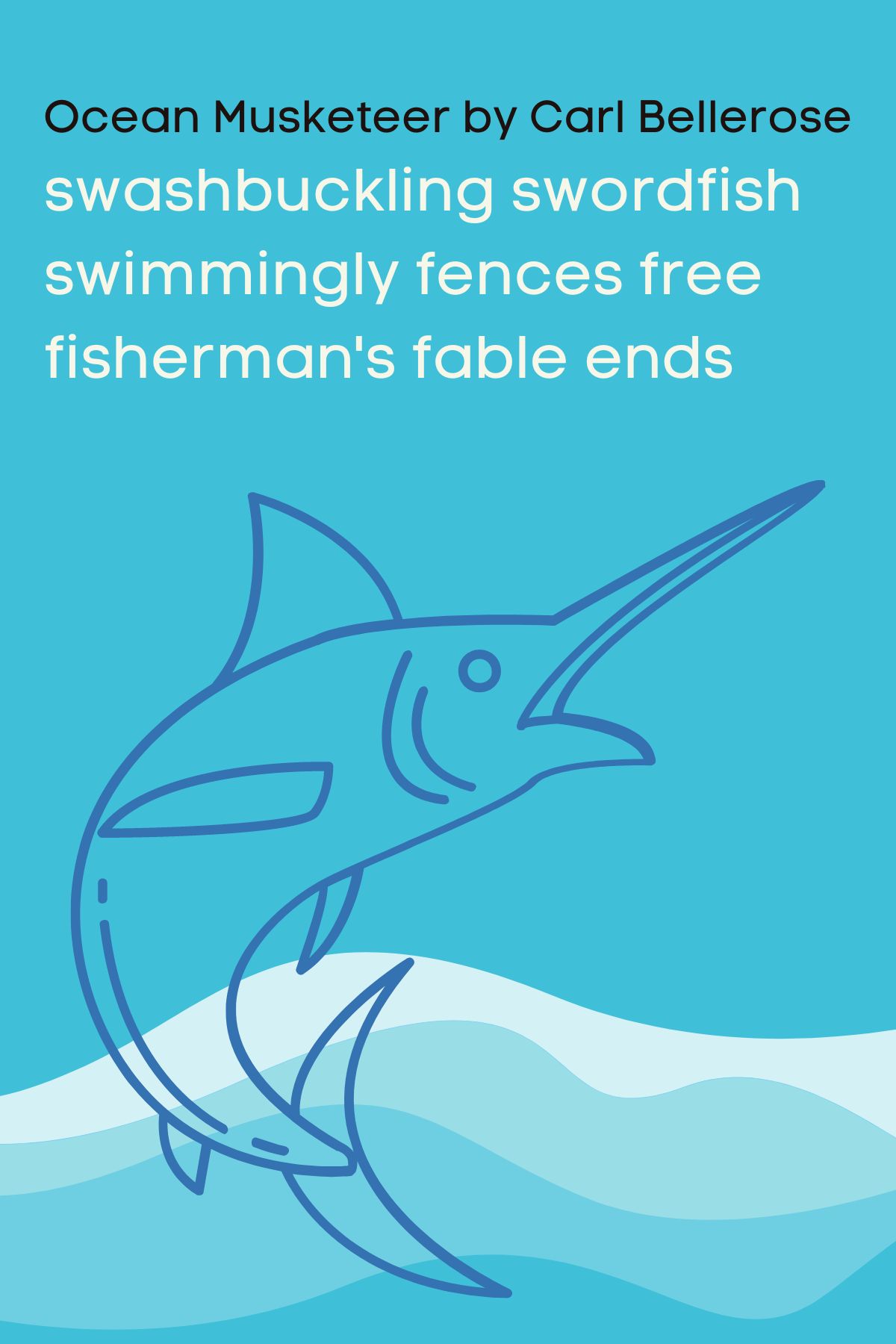 10. Fishing by Bill Baker
down went the bobber
set the hook and don’t panic
reel it in ~ fish fry!

11. Fishing Haiku by James Edward Lee
the fish in the lake
does not want to be catch caught
he won’t eat the worm

13. Gone Fishing by Richard Breese
Shiftless Louie’s constant wish
For a new satellite dish.
Made his wife stammer
In her best grammar,
Come home once you’ve caught a fish.

14. Second Outing by Jeff Kyser
When Jesus burst on the fish scene,
Peter saw his net skills were quite keen.
“I don’t mean to be kvetching,
but as long as you’re catching,
can you make them both headless and clean?”

15. Fishing Tackle by Jack Horne
The trousers he’s wearing are Wrangler –
they’re great for his job as an angler
(although on a trip
he busted his zip
and showed all those present his dangler).

16. A Fish Tale by Bobby May
I once saw a fish on a hook,
traveling up and down a brook
with a tasty worm inside
wiggling once then died
looking back with, a dirty look

17. Sitting In A Rowboat by Jack Ellison
Patience is a virtue when casting a line
One never know how many damn times
Fishing requires drinking
Sitting and thinking
Catching fish doesn’t enter the paradigm 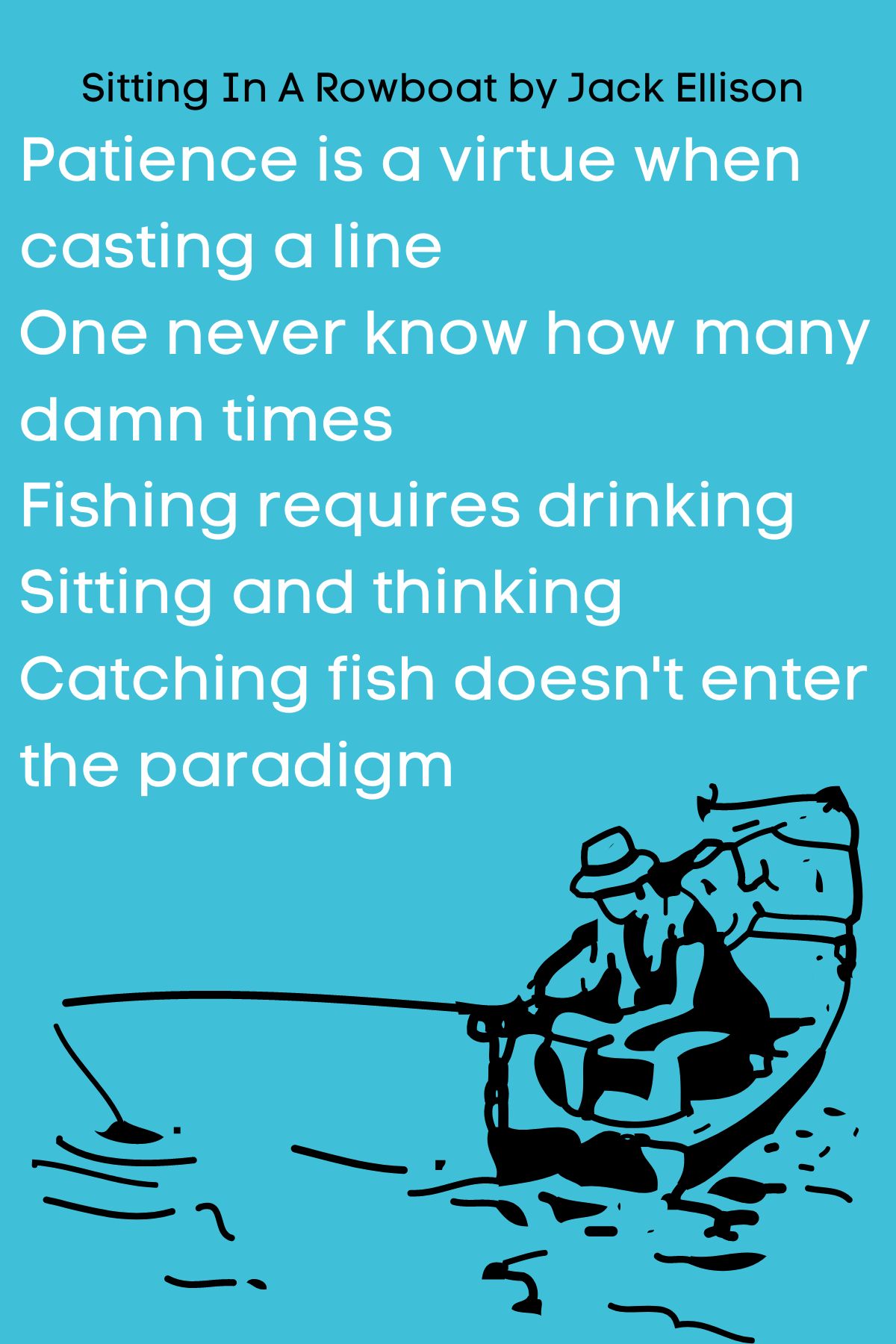 19. The Song of the Reel by W. E. Hutchinson
Close by the edge of the lily pads, there’s a flash and swirl of spray,
And the line draws taut, and the rod dips low, and I sing as he speeds away;
And I whir and click with the joy of life, as the line runs in and out,
And I laugh with glee as I reel him in, the gamy and speckled trout.
And again the silken line is cast, and the fly like a feather glides,
Close to the rock where the water’s deep, and the wary black bass hides.
There’s a strike and a run as the game is hooked, and his rush with a snub is met,
But he yields at last to the steady strain, and is brought to the landing net.
As the sun sinks low in the western sky, and the shadows longer grow,
And the night hawk wheels in his silent flight, and the crickets draw their bow,
And the cat-tails wave in the gentle breeze, and the boat glides on apace;
Then I reel in the line, while the bamboo rod is laid away in its case.
The bass and the trout, and the wall-eyed pike, the pickerel and muskalonge,
Have each and all been lost or won as I caused them to race or plunge,
I’m the sportsman’s friend, and a foeman bold, and I’ve filled full many a creel;
For what would the fisherman’s luck be worth without the song of the reel?

20. Fishing and Wishing by Zitella Cocke
Three little folks by the meadow brook,
With a line of twine and a bent-pin hook,
And an eager, earnest, serious look,
As if they were conning a lesson book,
Sat resolutely fishing!

“I wish,” said Tom, “for a pot of gold
With every minute that has been told
Since the day the earth was young or old,
I’d have more money than I could hold.
See, what I get for fishing! ”

“I wish,” said Ned, “that the ships at sea,
And all that is in them, belonged to me,
And all that have been, or ever will be:
My wish is the best, don’t you agree,
And worth a day of fishing! ”

“I wish,” said Moll, with a toss of her head,
And a pout of her lips that were cherry red,
“You’d get your wishes, just as you said,
And give them to me, — now, Tom and Ned,
I’ve got the most by wishing! ”

21. Bringing Forth by L.L. Barkat
On the gold rock,
we used to sit
with our primitive poles.
Sticks we gathered
from grandmother’s
broken maples,
pins we tied by the head
onto white string.
The sunnies swam
brown-golden-rainbow
in her lake, near the sand beach
she brought in
herself. We always cheered
when we hooked
the surge of body and fin.
But I also cried
at the blood, the shining hole,
and more often than not
I threw the breathless sunnies
back in.

22. Gold Fish by Hilda Conkling
Like a shot of gold
Or an arrow darting
With thin gold wings
He swims . . .
Now around . . . then straight
Then a swish of tail . . .
Then zigzag all along
With a kind of stiff smile . . .
In ponds or bowls
He swims and stares
Out of big popping eyes
Of ebony . . .

24. Fishing by Lee Robert
At dawn i cast my rod,
As the sun does rise,
On a rocky ledge i cast my line,
The best part of my life,
Is to serve time by the sea,
To hook a fish and release it back,
I can taste the salt on my tongue,
As the waves break,
White horses can be seen,
The midday sun beats down,
My back turns brown,
As the sun sets,
I walk along the beach,
My feet sink into the sand,
As the cold sea washes over my feet,
My footprints disappear
Tonight I sleep ready for another day,
As at dawn I cast my rod.

25. Requiem for the Fishermen by Regina M. Elliott
Requiem for the fishermen,
who lay at rest in the depths,
once, the seas foamy spray
flecked their weatherworn faces,
maritime spirits,
still breathing in their children’s dreams,
chapped, ruddy hands
once embraced their loyal wives,
the legend of their livesis spoken in the frigid winter waves.
In funereal respect,
come to the mariner’s cathedral,
sing a hymn of the sea,
their families grief will reflect
beyond their own yearswithin the tide is their briny tears.