Inside: We have gathered up the 13 Best Baseball Poems for Your Little Slugger.

Baseball is a sport as American as apple pie. It’s no wonder that baseball has inspired so many poems, with its rich American history, the need for patience and perseverance, and the undying loyalty of baseball fans. And of course, there’s the heartbreaking moment when your team loses. That is certainly poetic.

We hope you enjoy these 13 Best Baseball Poems, and help you remember fondly the time your team almost won it all. 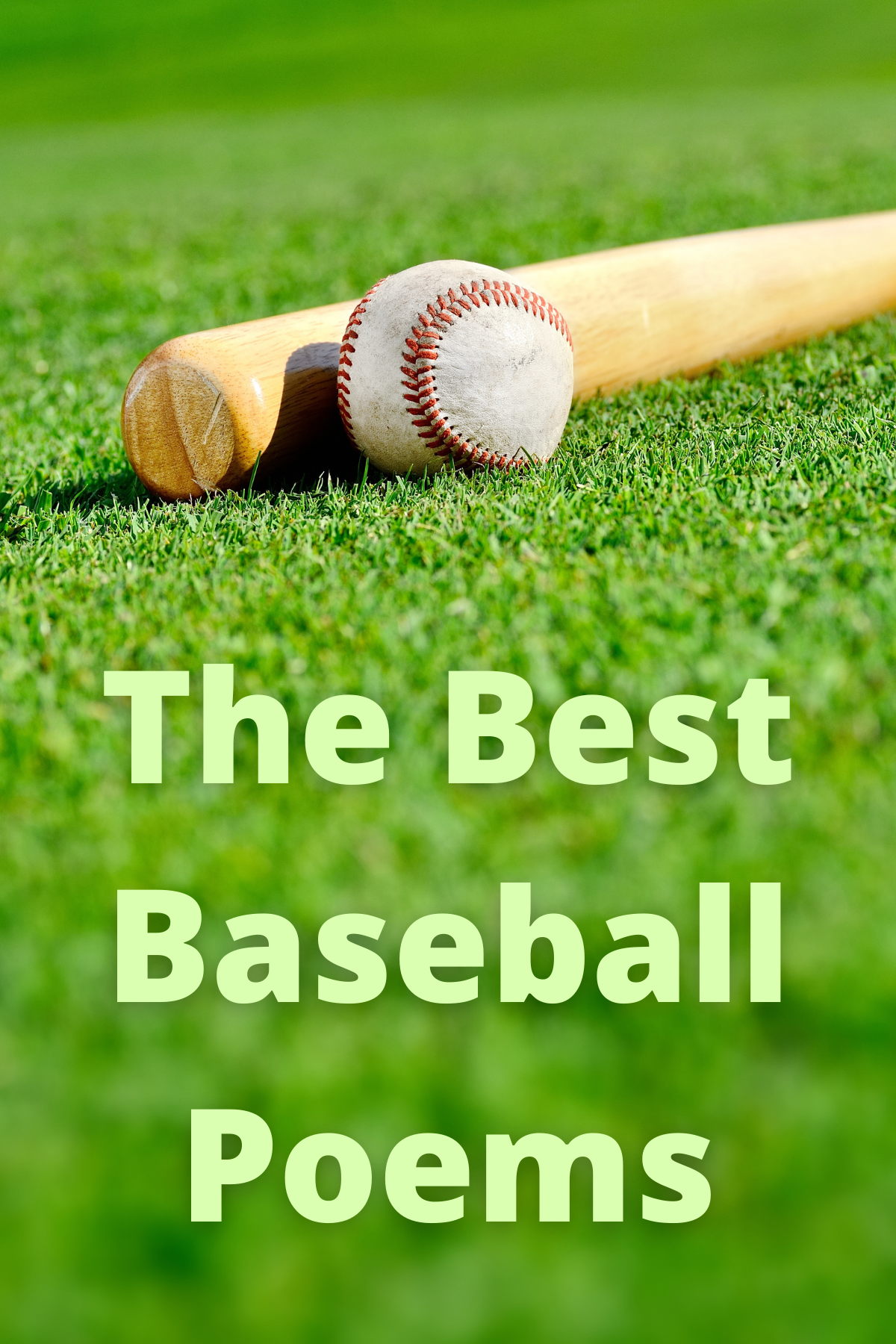 1.Casey at the Bat by Ernest Lawrence Thayer

The Outlook wasn’t brilliant for the Mudville nine that day:
The score stood four to two, with but one inning more to play.
And then when Cooney died at first, and Barrows did the same,
A sickly silence fell upon the patrons of the game.
A straggling few got up to go in deep despair. The rest
Clung to that hope which springs eternal in the human breast;
They thought, if only Casey could get but a whack at that –
We’d put up even money, now, with Casey at the bat.

But Flynn preceded Casey, as did also Jimmy Blake,
And the former was a lulu and the latter was a cake;
So upon that stricken multitude grim melancholy sat,
For there seemed but little chance of Casey’s getting to the bat.

But Flynn let drive a single, to the wonderment of all,
And Blake, the much despis-ed, tore the cover off the ball;
And when the dust had lifted, and the men saw what had occurred,
There was Johnnie safe at second and Flynn a-hugging third.

Then from 5,000 throats and more there rose a lusty yell;
It rumbled through the valley, it rattled in the dell;
It knocked upon the mountain and recoiled upon the flat,
For Casey, mighty Casey, was advancing to the bat.

There was ease in Casey’s manner as he stepped into his place;
There was pride in Casey’s bearing and a smile on Casey’s face.
And when, responding to the cheers, he lightly doffed his hat,
No stranger in the crowd could doubt ’twas Casey at the bat.

Ten thousand eyes were on him as he rubbed his hands with dirt;
Five thousand tongues applauded when he wiped them on his shirt.
Then while the writhing pitcher ground the ball into his hip,
Defiance gleamed in Casey’s eye, a sneer curled Casey’s lip.

And now the leather-covered sphere came hurtling through the air,
And Casey stood a-watching it in haughty grandeur there.
Close by the sturdy batsman the ball unheeded sped-
“That ain’t my style,” said Casey. “Strike one,” the umpire said.

From the benches, black with people, there went up a muffled roar,
Like the beating of the storm-waves on a stern and distant shore.
“Kill him! Kill the umpire!” shouted someone on the stand;
And its likely they’d a-killed him had not Casey raised his hand.

With a smile of Christian charity great Casey’s visage shone;
He stilled the rising tumult; he bade the game go on;
He signaled to the pitcher, and once more the spheroid flew;
But Casey still ignored it, and the umpire said, “Strike two.”

“Fraud!” cried the maddened thousands, and echo answered fraud;
But one scornful look from Casey and the audience was awed.
They saw his face grow stern and cold, they saw his muscles strain,
And they knew that Casey wouldn’t let that ball go by again.

The sneer is gone from Casey’s lip, his teeth are clenched in hate;
He pounds with cruel violence his bat upon the plate.
And now the pitcher holds the ball, and now he lets it go,
And now the air is shattered by the force of Casey’s blow.

Oh, somewhere in this favored land the sun is shining bright;
The band is playing somewhere, and somewhere hearts are light,
And somewhere men are laughing, and somewhere children shout;
But there is no joy in Mudville – mighty Casey has struck out.

2. Batter Up! by Lucas Szewczyk

Step up to the plate

Keep your eye on the ball

They yell from the stand

A swing and a miss

That was strike one

Wait for your pitch

The Coach says, “Just have some fun!”

The ball whizzes by

That was strike two

I thought that was high

But what can you do?

Feet planted and elbows back

I swung my trusty bat

And surprised I heard a smack

First hit of the season

I made it on base

Cheers roared from my team

And a smile on my face

3. A Poem about Baseballs by Denis Johnson

for years the scenes bustled
through him as he dreamed he was
alive. then he felt real, and slammed

awake in the wet sheets screaming
too fast, everything moves
too fast, and the edges of things
are gone. four blocks away

a baseball was a dot against
the sky, and he thought, my
glove is too big, i will

drop the ball and it will be
a home run. the snow falls
too fast from the clouds,
and night is dropped and

snatched back like a huge
joke. is that the ball, or is
it just a bird, and the ball is
somewhere else, and i will
miss it? and the edges are gone, my

hands melt into the walls, my
hands do not end where the wall
begins. should i move
forward, or back, or will the ball

come right to me? i know i will
miss, because i always miss when it
takes so long. the wall has no
surface, no edge, the wall

fades into the air and the air is
my hand, and i am the wall. my
arm is the syringe and thus i

become the nurse, i am you,
nurse. if he gets
around the bases before the
ball comes down, is it a home

run, even if i catch it? if we could
slow down, and stop, we
would be one fused mass careening
at too great a speed through
the emptiness. if i catch

the ball, our side will
be up, and i will have to bat,
and i might strike out.

4. Alone At The Plate by Dusty Baker

He pulls on a helmet,
picks up the bat,
and walks to the plate,
“gotta hit and that’s that.

“The crowd starts to yell,
the game’s on the line,
last inning, two outs,
the score’s nine to nine.

Dad yells, “Go get it,”
Mom wrings her hands,
coach hollers, “hit it,”
but alone there he stands.

Heros are made
in seconds such as this,
but he’s just a little boy,
what if he should miss?

Years after this game’s ended
and he’s little no more,
will he remember the outcome
or even the score?

No he’ll have forgotten
if he was out, hit, or a run,
he’ll only look back on
his friends and the fun.

So cheer this boy on,
alone with his fate;
help him remember with fondness
this stand at the plate.

Spend your time wisely
and help in his quest
to be a hitter
with confidence
and always his best.

And when the game’s over,
this boy can stand tall,
for you’ve helped him prepare
to give it his all! 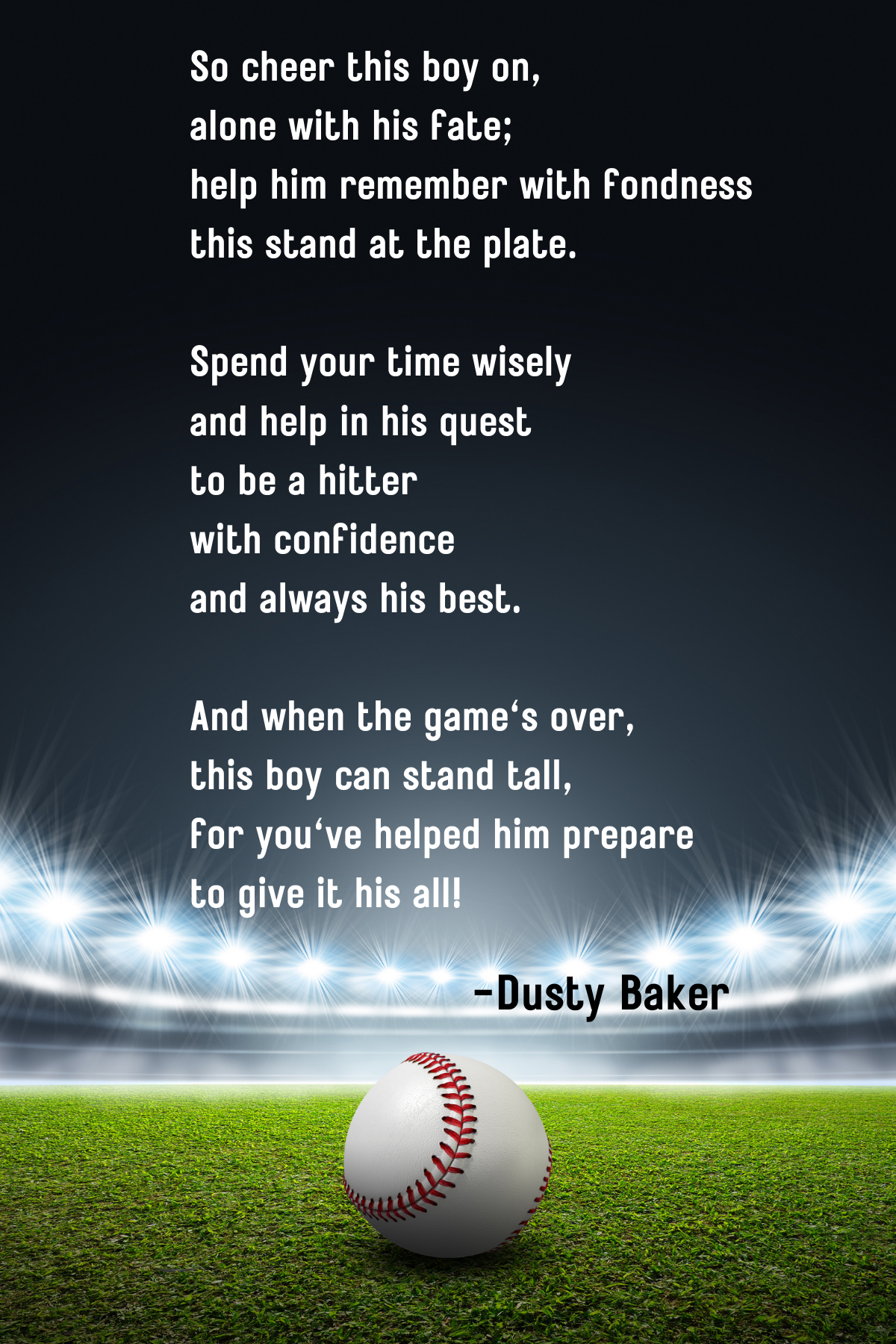 When you came to the end of your perfect game,

And you stood alone with your thoughts,

While your chums sang out “Hurray, Hurray!”

For the joy your feat had brought,

Did you think what the end of a perfect game

Had meant to the baseball crowd?

Watching the batters go down in flame

Had made your teammates proud.

Well. it was the end of a perfect game.

At the end of the Series too;

And it left its mark in the Record Book

Where every stat is true.

My memory recalls that day

With Yogi running out to the mound,

When we think on the glory of your perfect game

Does it make us young again?

6. If School Were More Like Baseball by Kenn Nesbitt

If school were more like baseball
we’d only have to play.
We’d hang out in the sunshine
and run around all day.

We wouldn’t have to study.
We’d practice and we’d train.
And, best of all, they’d cancel
whenever there was rain. 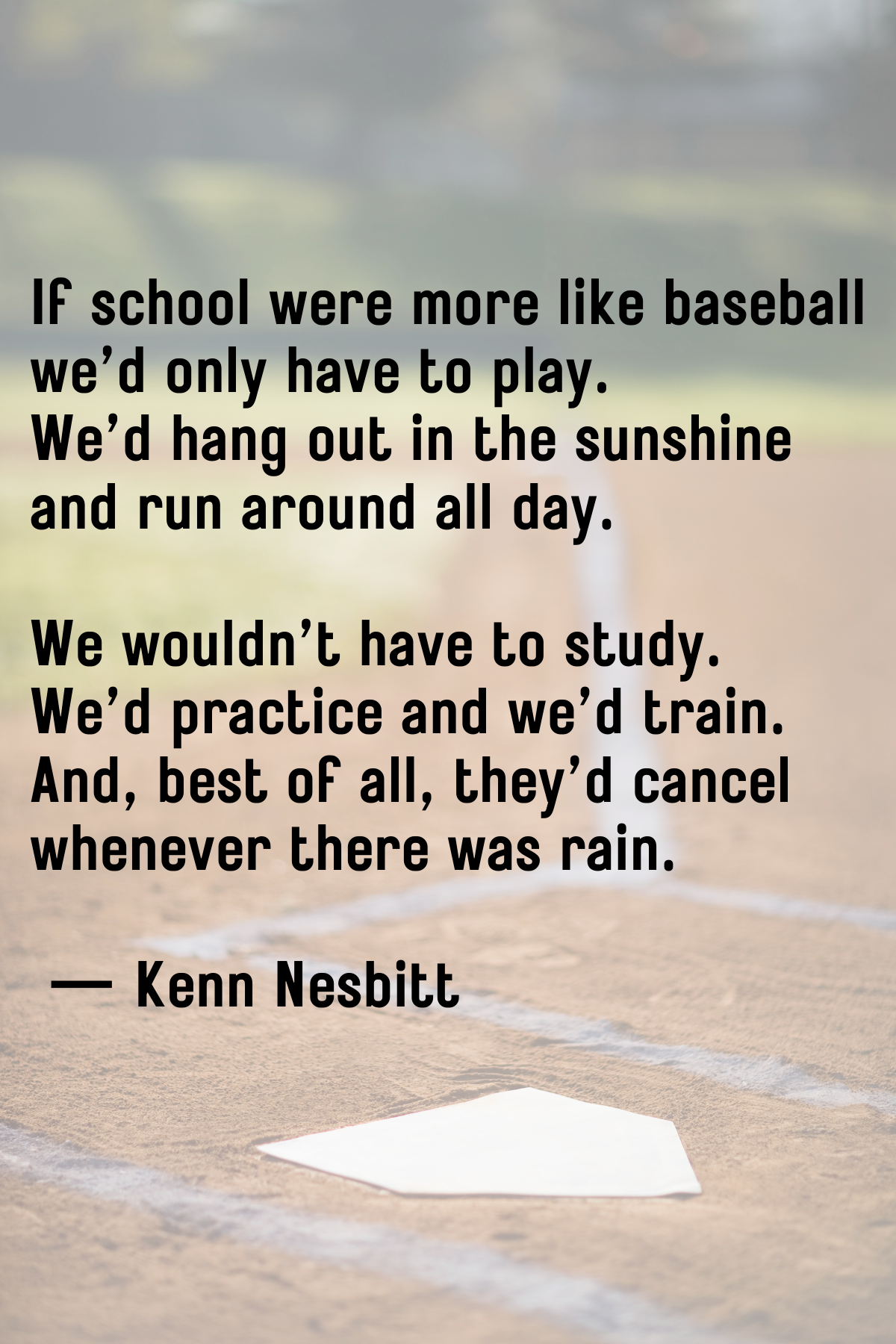 Daily paper’s on the rack –
Sporting News is in the back.
Things are really looking black –
Home team’s getting off the track.
Everything is out of whack –
Paying players all that jack.
How to get those bats to crack?
Time to try another tack –
Give the manager the sack?
Get another old-time hack –
To be leader of the pack.
Can he teach them to attack?
I don’t have the answer, Mac!

the pitch: down and in

Load
Step
Swing
The ball flies off the bat
As if to touch the stars
I start to trot
To first base
The ball clears the fence
With ease
My fist goes into the air
In excitement
The crowd roars
For I just won the game
With one swing of the bat
I round second
Then third
Finally home plate
The team greets me at home
With congratulations
And high fives
I am the hero
I just won the game with
My first home run. 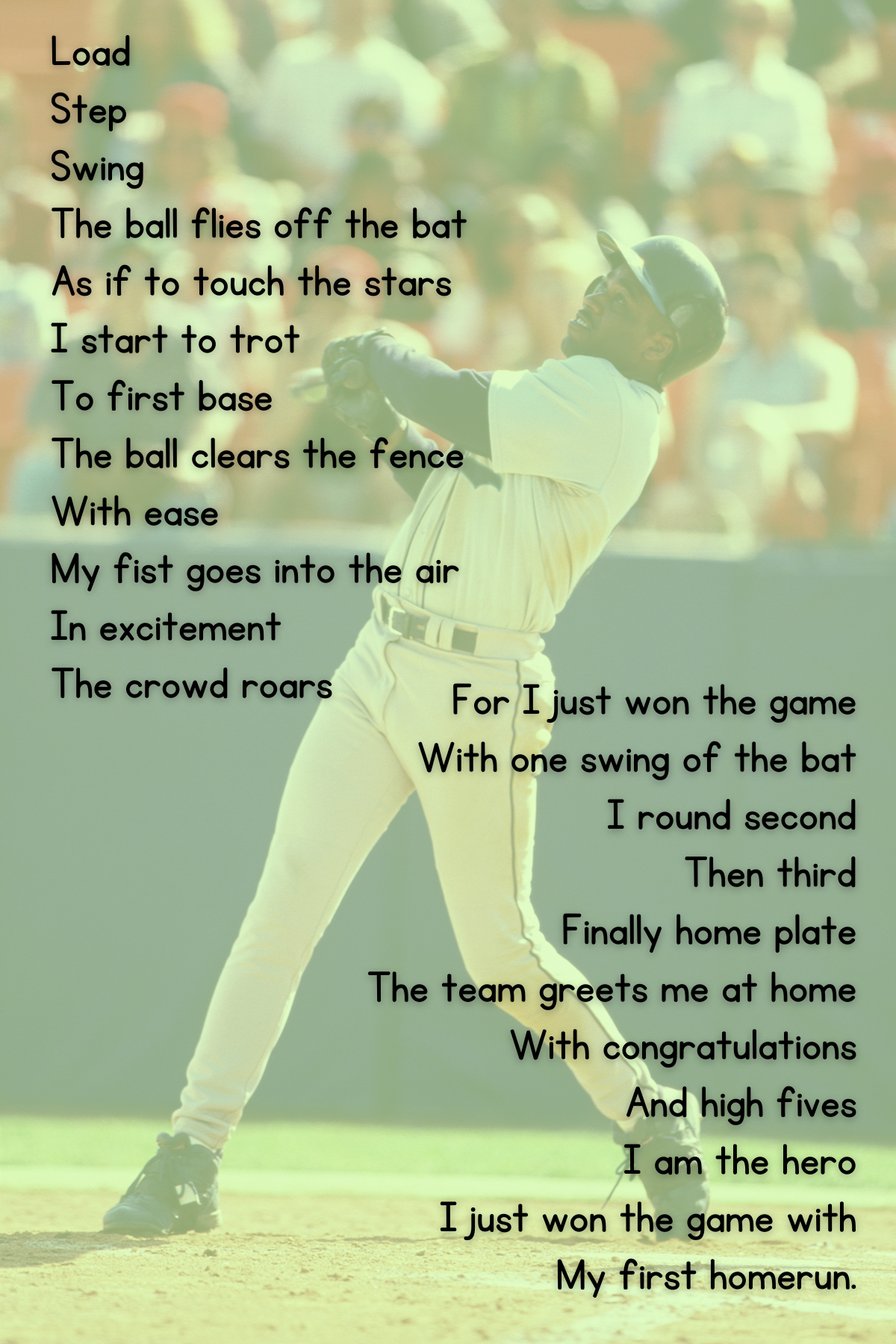 11. Cobb Would Have Caught It by Robert Fitzgerald
In sunburnt parks where Sundays lie,
Or the wide wastes beyond the cities,
Teams in grey deploy through sunlight.

Talk it up, boys, a little practice.

Coming in stubby and fast, the baseman
Gathers a grounder in fat green grass,
Picks it stinging and clipped as wit
Into th eleather: a swinging step
Wings it deadeye down to first.
Smack. Oh, attaboy, attyoldboy.

Catcher reverses his cap, pulls down
Sweaty casque, and squats in the dust:
Pitcher rubs new ball on his pants,
Chewing, puts a jet behind him;
Nods past batter, taking his time.
Batter settles, tugs at his cap:
A spinning ball: step and swing to it,
Caught like a cheek before it ducks
By shivery hickory: socko, baby:
Cleats dig into dust. Outfielder,
On his way, looking over shoulder,
Makes it a triple. A long peg home.

It was my turn to bat
And I hit the ball
So hard it sailed
Right over the wall.
The crowd went wild.
I started to run.
How happy I’d be
If my team won.
First base, second,
third—I’m home free!
Hurrah for my team!
Hurrah for me! 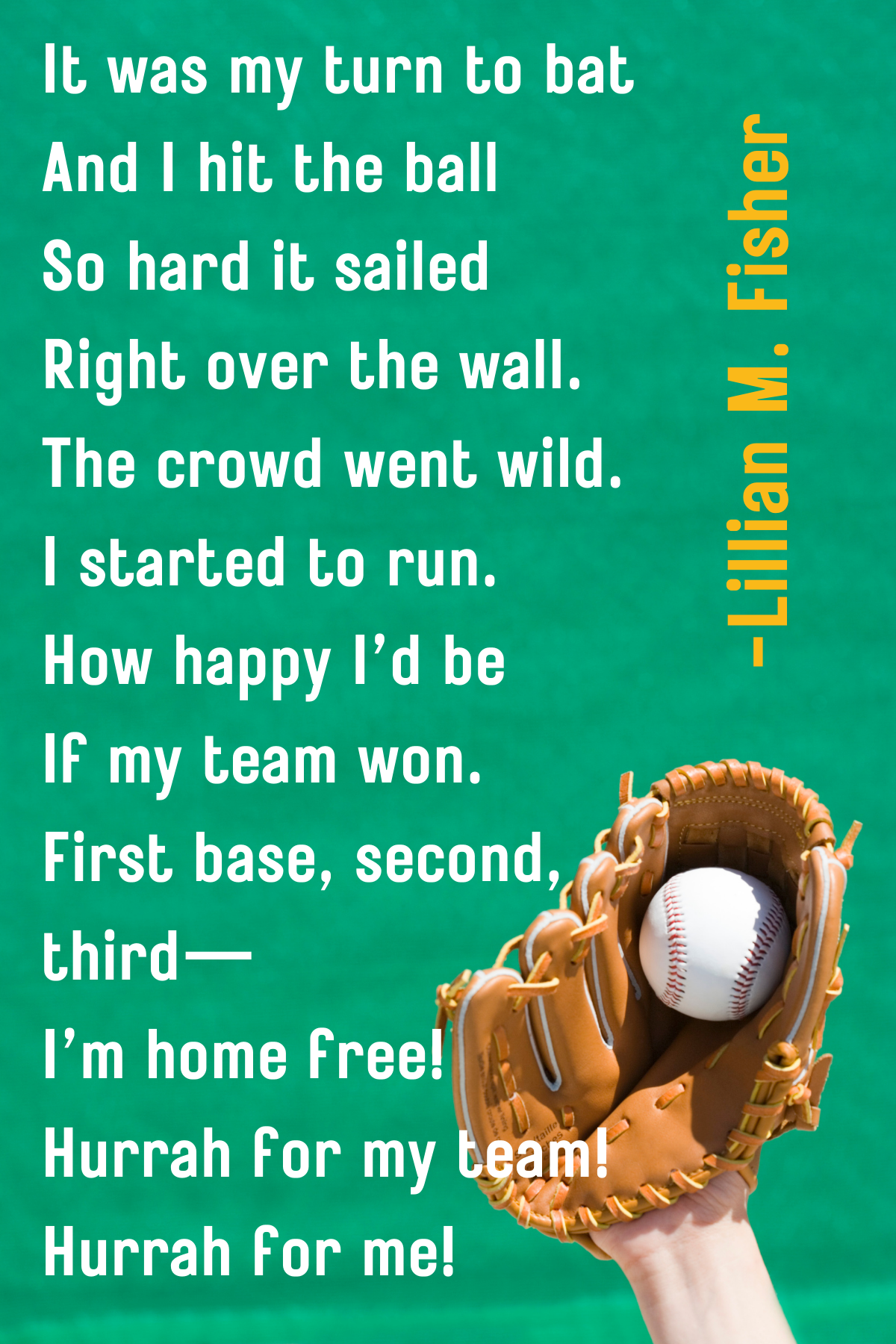 They are not just empty spaces

Surrounded by tiers of empty seats.

They speak with silent eloquence

Of green grass and ghosts

Of ball games past

And promises of ball games to come.

You have to relax and listen.