It’s a curious thing, the bluebird. It’s one of the few birds that has been universally loved and admired by people from all walks of life, cultures, and religions. Whether it’s because of their beautiful plumage or their sweet song, there’s just something about bluebirds that makes them so special.

And while there are many different species of bluebird, the one that is most commonly associated with happiness and joy is the Eastern Bluebird. It’s a fitting symbol of happiness, considering their cheerful song and beautiful blue color.

In this article, we’ve compiled a list of 15 of the best bluebird poems, written by some of the most celebrated poets in history. We hope you enjoy them!

Seasoned poets like Charles Bukowski, Emily Dickinson, and Hilda Conkling have all written beautiful bluebird poems. The Bluebird Charles Bukowski said, is a prized possession that resides in his deepest heart.

There is something special about bluebirds and what they mean to us. Here are a few of our favorites:

there’s a bluebird in my heart that

wants to get out

but I’m too tough for him,

I say, stay in there, I’m not going

to let anybody see

there’s a bluebird in my heart that

wants to get out

but I pour whiskey on him and inhale

and the whores and the bartenders

and the grocery clerks 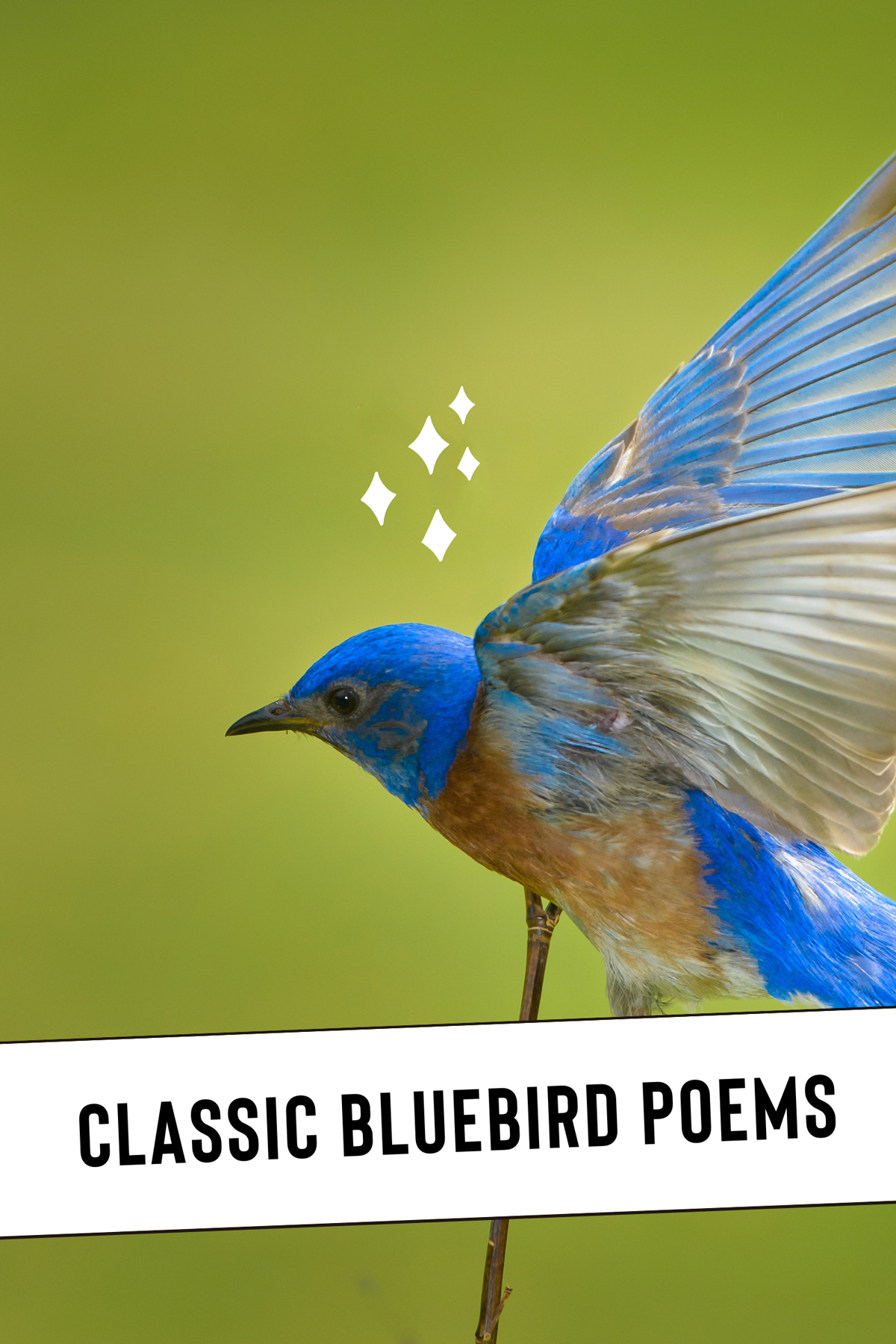 Before you thought of spring,

Except as a surmise,

You see, God bless his suddenness,

A fellow in the skies

Of indigo and brown.

You have to go down south

And my flower-beds are covered with fluff out of the clouds.

Sing me one more song

When God had made a host of them,

To hold its blossom blue;

So into it He breathed a song,

And suddenly, with petals strong

As wings, away it flew.

Dost thou carol thus to me,

“Spring is coming! Spring is here?”

Say’st thou so, my birdie dear?

What is that, in misty shroud,

Stealing from the darken’d cloud?

Yet thou singest, blithe and clear,

“Spring is coming! Spring is here!”

Bluebirds are beautiful in nature and they can be described in detail with many words, especially through a poem. Even without a quill and ink, you can also write your very own creative bluebird poem.

No print of fox and hare

To forage for their meat

Even in dooryard bare

Under the peril of the human race;

And then one primrose dawn,

The bluebirds woke the happy earth

In the midst of the poplar that stands by our door,

We planted a bluebird box,

And we hoped before the summer was o’er

A transient pair to coax.

And lighted on our tree,

But at first the wand’rers were not so tame

But they were afraid of me.

They seemed to come from the distant south,

Just over the Walden wood,

And they skimmed it along with open mouth

Close by where the bellows stood.

As I went out a Crow

I was looking for you.

How do you do?

I just came to tell you

To tell Lesley (will you?)

That her little Bluebird

Wanted me to bring word

That the north wind last night

That made the stars bright

And made ice on the trough

Almost made him cough

His tail feathers off.

He just had to fly!

But he sent her Good-by,

And said to be good,

And wear her red hood,

And look for skunk tracks

In the snow with an ax—

And perhaps in the spring

He would come back and sing.”

And soft she sighed–Too soon he came;

On wings of hope he met the knell;

His heavenly tint the dust shall tame;

Ah, some misgiving had been well.

But, look, the clear ethereal hue

In June it makes the Larkspur’s dower;

It is the self-same welkin-blue–

The Bird’s transfigured in the Flower.

flies into my house.

When it flies out, it leaves behind

The blue hops down

till, finally, it assumes the face of a poem

Before long, the floor is an upside down-blue sky

and the blue of the poem has made its way

into my ink filler,

The bluebird is a symbol of good fortune and happiness, among other things. So, it’s no surprise that there are many poems about bluebirds that are optimistic and full of hope. These poems will lift your spirits and make you feel good about the world.

Do you hear the calling?

My bluebird is calling.

My little bluebird’s promising me blue skies that will soon be falling.

Soon the sun will be shining.

This bluebird is special,

so cheery and merry too;

He’s here for just one reason,

to bring happiness to you!

enjoy each and every day;

This little Bluebird of Happiness,

will bring smiles along the way!

You are a grace

at foot of the glacier, open to a cloudless sky—

nor recognized by idle school children

tied to a telephone wire

You are a flash of living, breathing blue.

And Lord what am I

“Out of the South I wing,

Blown on the breath of Spring:

That in my beak I bring

Some maiden shall catch and sing,

Filling it with the longing

And the blithe, unfettered thronging

Of her spirit’s blossoming.

The bluebirds are returning with good luck and good fortune

Watch them swoop in flittering flutters

Hear them sing in magical melodies

As charming as snow white, so the fairest of all birds