Take a moment and close your eyes, think about ice cream in all its glory. You’re already salivating, aren’t you? Kind of hard not to! I’m 99% sure that ice cream is the best food on this planet. That other 1% is reserved for ice cream cake…of course.

Ice Cream has stolen the hearts of the masses around the globe, and it has for hundreds of years. So it should be of no surprise to you that ice cream has been represented in the arts.

That’s right, paintings, sculptures, even poetry! If that last one piques your interest then you clicked on the right article. I’ve been on an ice cream kick lately, and to fully honor that I wanted this sweet treat to be more than just a blissful eating experience, but an intellectual one as well!

So I created a list of Ice Cream Poems that will leave you running to the freezer to get out your pint!

But to truly appreciate the best dessert known to man, we must first get to know its history. 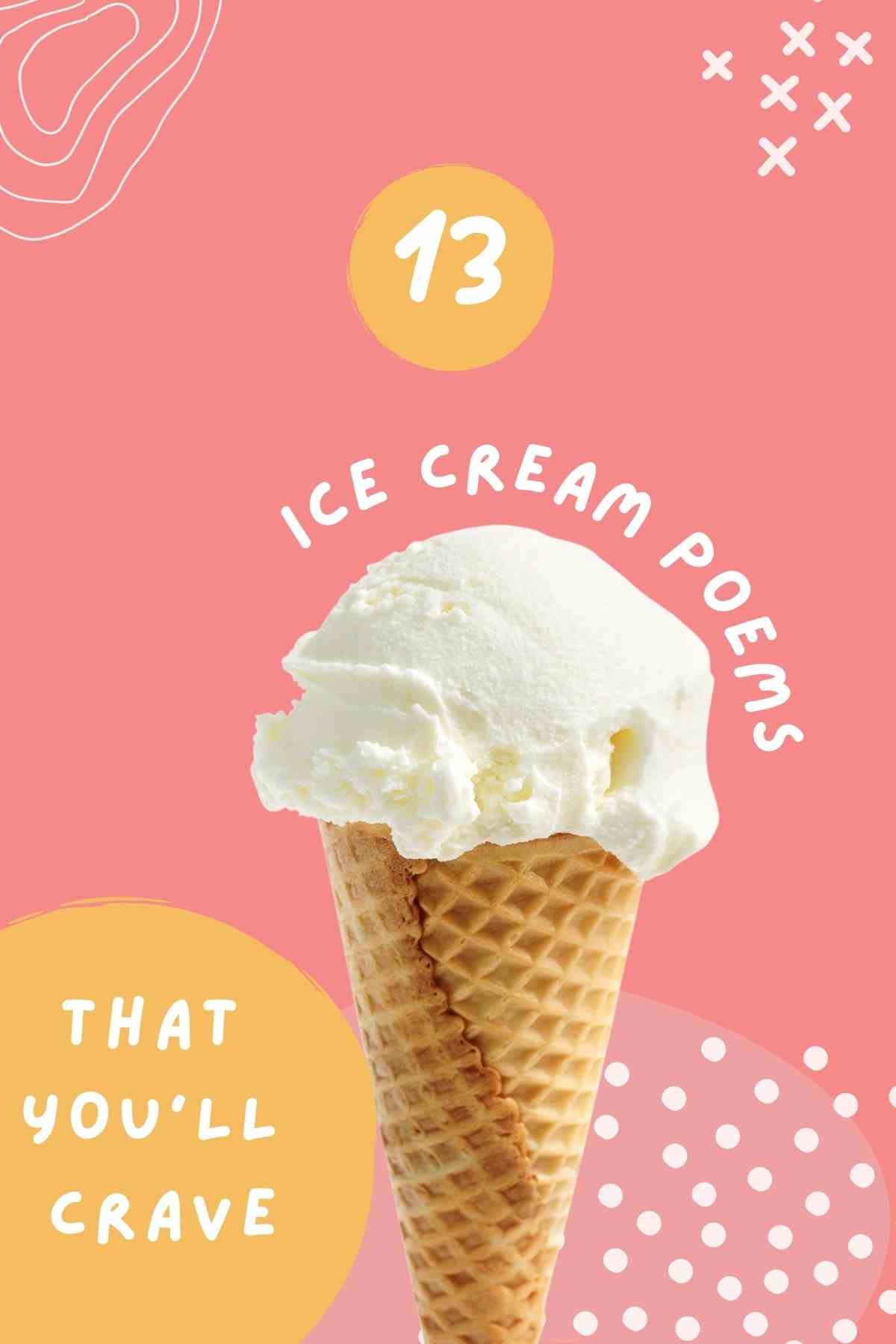 The History of Ice Cream

Ice cream can be traced wayyyyy back to the early second century B.C!  Though the specifics are fuzzy, we know for certain that Alexander the Great fancied himself some Ice & Snow flavored with Honey. Definitely not the ice cream we know and love but it’s a start!

We got closer to today’s concept of the treat in the 1500s when Marco Polo made his way back to Italy with a recipe that is super similar to today’s sherbet! At the same time, England also made the discovery of ‘cream Ice’, as they called it. Interesting!

In 1777, the first account of ice cream in the New World(the U.S) was made! Though it was only enjoyed by the rich until the 1800s. Wide manufacturing of it finally started to hit the ground due to a milk dealer from Baltimore by the name of Jacob Fussell. The rest was history!

It’s pretty odd to think about how old ice cream is, and how many little steps it took to because so mainstream today. It makes you appreciate it all the more! Speaking of appreciating it, let’s get into these awesome Ice Cream Poems. These will just go to show you how much this sweet treat has made its way into the hearts of people around the world. Isn’t nice to have something that connects us so? 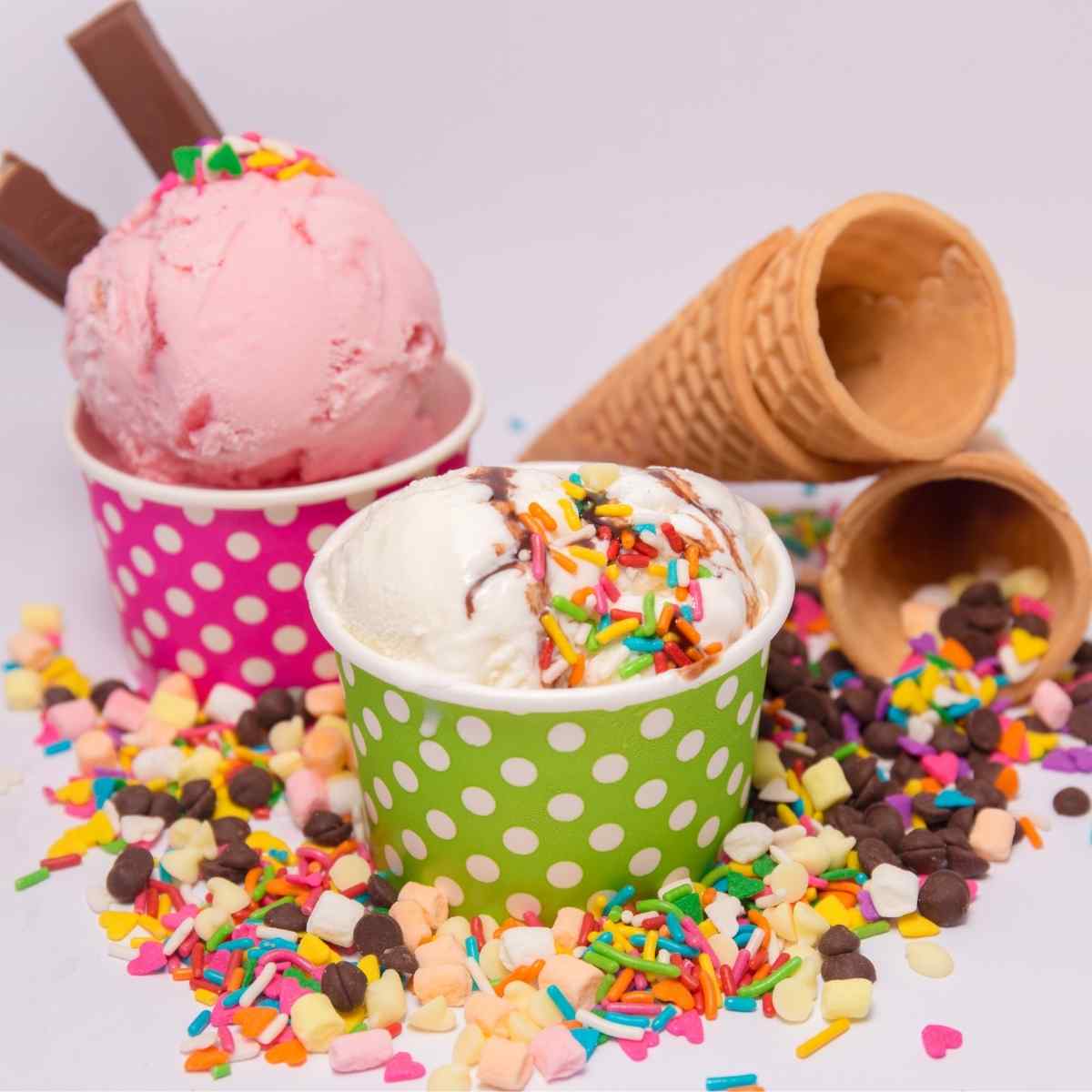 1. Choices At the Dairy Queen

Summer days were exciting in the sixties.
We lived a block up Dairy Queen hill.
Our mother would say “Let’s go get a DQ”
Not every summer day, but at least once a week.

My tongue would salivate all the way there.
Would I get a Dilly Bar? Chocolate? Cherry?
Would I get a malt? A shake? Or a coated cone?
It took me forever to decide.

I am glad in those days we did not have blizzards
where you can choose this candy or that candy,
sixteen toppings, and eleven different flavors.
I would still be standing there trying to decide
fifty years later.

A delicacy of sugar but no spice
frothy, bubbly and freezing liquid ice
thick and creamy in its savory ways
topped with candy or even glaze!
A sight to behold for sore eyes

4. Simply the Best, Better than All The Rest

What’s my favorite ice cream?
To reveal it a dream
I could eat it day and night
Best not to wear white
Whatever size serving, I eat every bit
CHOCOLATE

How I love you so,

You’re better than all the rest,

You’ll have my heart forever,

Believe it to be true,

Because you’re not just one sweet treat,

you are actually two!

6. The Emperor of Ice Cream

Call the roller of big cigars,
The muscular one, and bid him whip
In kitchen cups concupiscent curds.
Let the wenches dawdle in such dress
As they are used to wear, and let the boys
Bring flowers in last month’s newspapers.
Let be be finale of seem.
The only emperor is the emperor of ice-cream.
Take from the dresser of deal,
Lacking the three glass knobs, that sheet
On which she embroidered fantails once
And spread it so as to cover her face.
If her horny feet protrude, they come
To show how cold she is, and dumb.
Let the lamp affix its beam.
The only emperor is the emperor of ice-cream.
-Wallace Stevens

I am Ebenezer Bleezer,
I run BLEEZER’S ICE CREAM STORE,
there are flavors in my freezer
you have never seen before,
twenty-eight divine creations
too delicious to resist,
why not do yourself a favor,
try the flavors on my list:…

It is written in the Constitution,
to even qualify as a small town,
you need to have a drive-in ice cream place,
you can trust me, Madison wrote that down!

They become our favorite gathering spots
when the snow melts and the weather gets warm;
Dairy Bar, Custard Shed, the Frostee Hut,
we’ve seen the names, and it adds to the charm.

They look like they were built in the 50s,
and all of the best ones usually were,
the slight slanting roof, two windows out front,
paved spaces for parking instead of dirt.

A spattering of old picnic tables,
sometimes a pavilion in case it rains,
often a playground or a nearby park
where the kids run around and act insane.

Thy have the normal milkshakes and soft serve,
this is the baseline, where they make their cash,
but also a host of fun novelties,
snow cones, bombs pops, and other things like that.

The best ones usually also do food,
you see the smoke venting out from inside,
burgers and fried clams, American classics,
pigeons stand by waiting for dropped French fries.

Come Independence some do fireworks,
and brings local bands to play for the crowd.
They don’t seem much, but a town without them
is not the type of place I’d stick around.

Acrostic Poems are a style of poetry that chooses a word and then uses each letter in that word to start a sentence. The end result is a cute way to spell out a word within your own poetry! An easy way to remember it is to think of an Acronym because this is basically just the poet’s version of it!

I thought there was no better word to use for an acrostic poem than Ice Cream! Read on to find some of the cutest acrostic poems for this frozen treat! 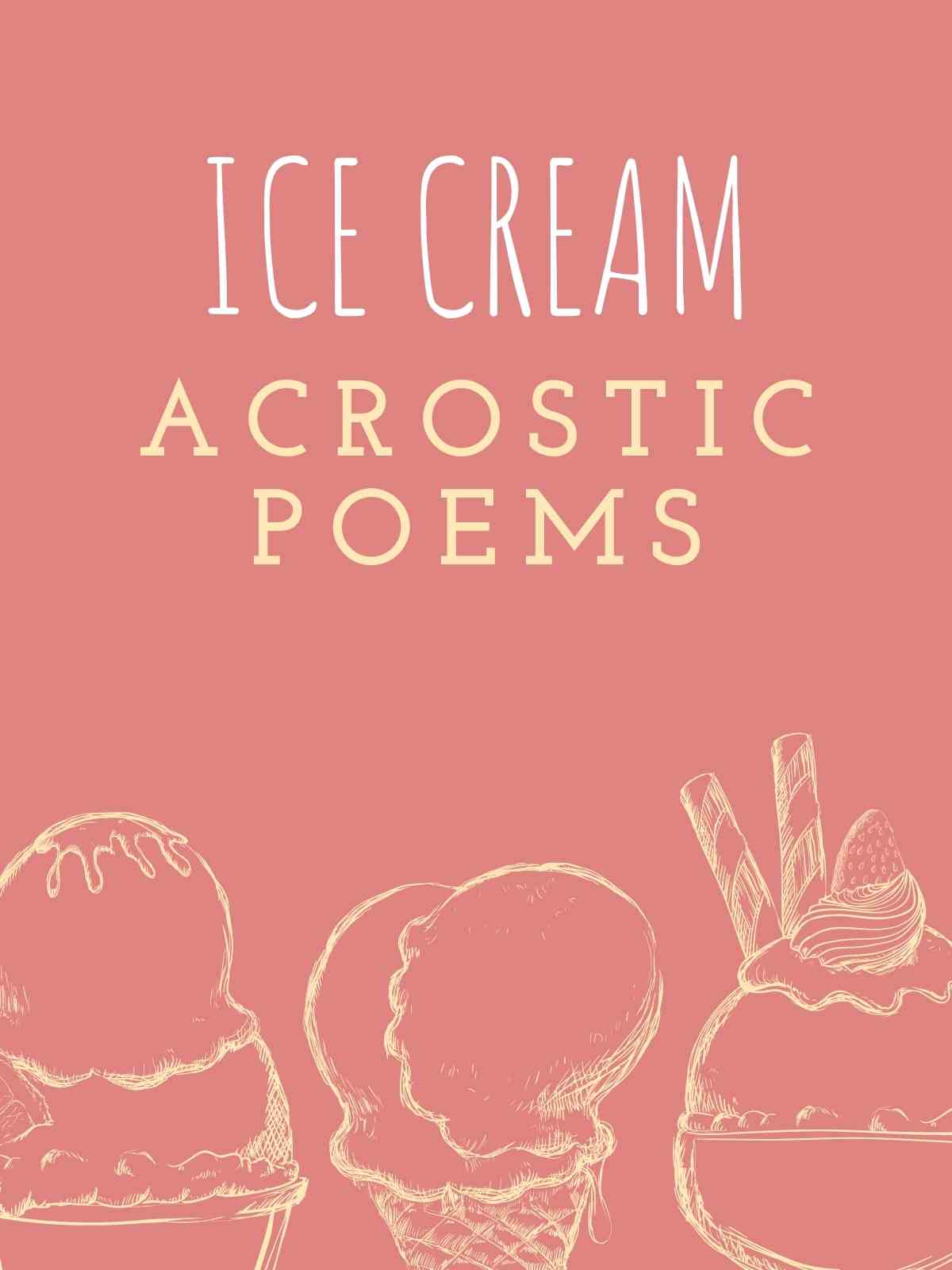 I love ice cream of every kind

End it quickly before it melts

Ate all my ice cream

My favourite treat in the whole world.

Idolized by all
Children and
Even adults too

Cold and lovely, so
Refreshing and
Exquisite to the tongue
Appreciation of this
Mankind can agree

Craving a sweet treat I am…

Enticed into the kitchen.

Cold awaits me in the dark.

Removing a tub from the frigid,

Entreating my daughter to help

As I blend chocolate and vanilla. 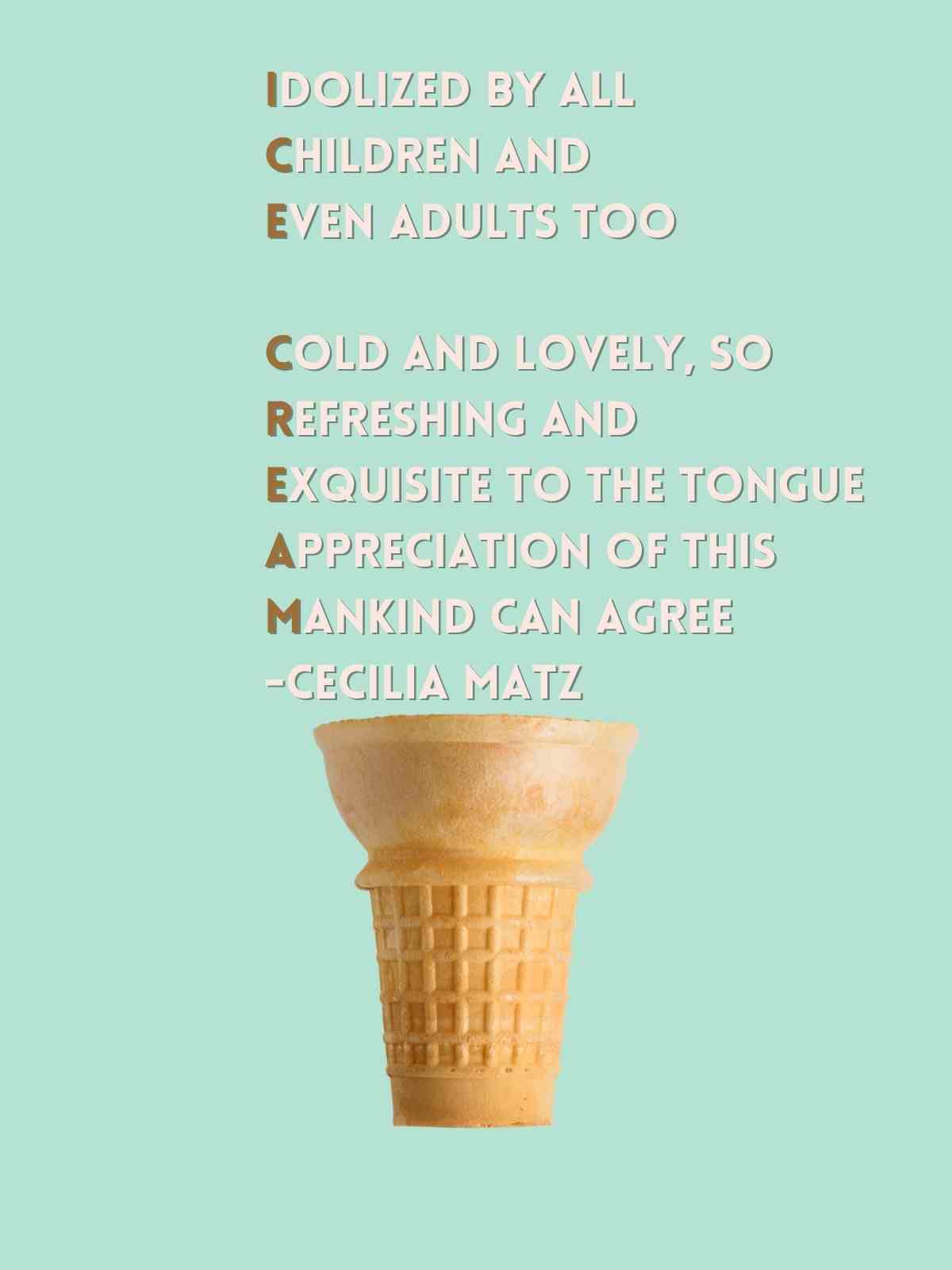