Inside: A medley of different poems about dandelions.

While many may curse when dandelions pop up across their lawn or garden, this wildflower is celebrated in many different art forms. Its simplicity and fragility bring about a feeling of peace, familiarity, and homeliness. They are classified as a weed, but the beauty of their yellow petals is undeniable, and once they mature and become gorgeous, feathery bulbs of white, they take on a whole other meaning.

Many believe that making a wish and blowing all the petals off of a dandelion is a way to seal it and have it come to fruition, making the flower seem almost magical.

Many poems about dandelions typically convey a message of tenderness and humility. Although the dandelion may not be as picturesque as other flowers that have inspired poems, it still has acted as an inspiration for many works.

They are always leaning towards the sun and modestly grow on the sides of roads, conveying a non complex symbol of life. 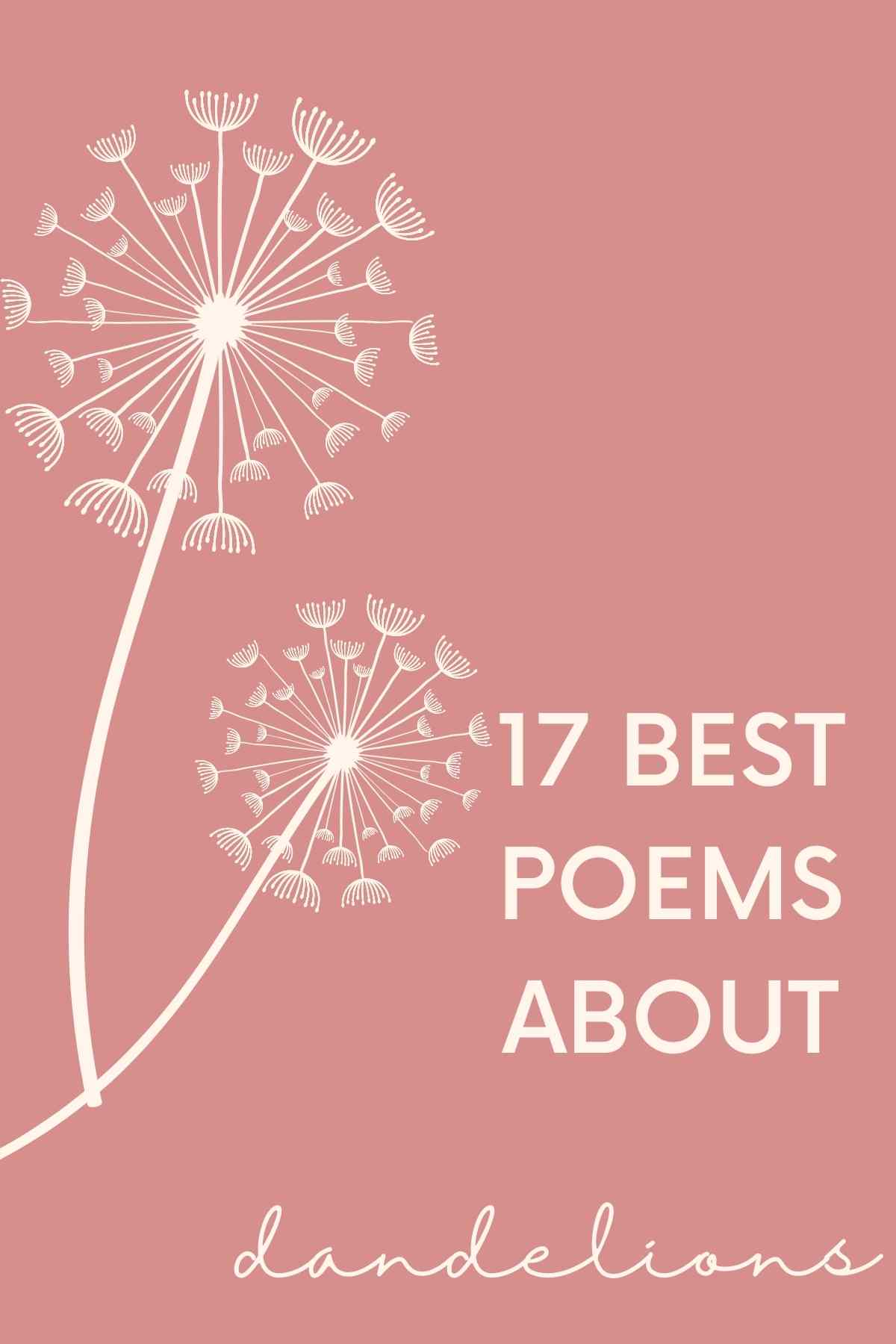 Many use poems about dandelions to symbolize the fleetingness of life. For they bloom as yellow buds, but then slowly turn into the white spheres that eventually blow away with the winds. From life until death, there is beauty to be admired in the dandelion whether it be their youthful, colorful petals or their magical, older ones that blow away with a single breath.

1. The First Dandelion by Walt Whitman – Whitman is known for his poems centering around nature, and this one is no different!

And combs his yellow hair,

The ant his cup of dewdrop takes

And set his bed to air;

The worm hides in a quilt of dirt

To keep the thrush away,

The beetle dons his pansy shirt—

They know that it is day! —Christopher Morley

3. Dandelion by Hilda Conkling – The narrator here is speaking to the dandelion in their lawn as if it were a person, asking it questions.

4. Dandelion by Randy McClave – A sweet poem about blowing on a dandelion and being taken back to youth when the thought of blowing on one would make all your wishes come true.

Who dresses all in yellow,

In yellow with an overcoat of green;

With his hair all crisp and curly,

In the springtime bright and early

A-tripping o’er the meadow he is seen … Oh, poor dandy, one so spandy,

Golden dancer on the lea!

6. The Dandelions Were Listening by Mary Nagy – A beautiful poem about playing the “He loves me, he loves me not” game with dandelion petals!

Lights up the meads,

Swings on her slender foot,

Lists to the robin’s note

In her white shroud,

Call from the cloud;

8. Golden the dandelion—Miser, for shame!

Spread out for bee or worm—all hoards the same.

No use in copying it—golden disk spread—

Lightly it nods and sways in its green bed.

Bumble-bees greedily swarm from the clover—

Clumsily—golden floors tempting the rover.
Far from the toil and fret—fair carpet spread—

As in a fairy dream—would you be led?

Then come—the skies are blue. Throw yourself down;

Golden the dandelion as a king’s crown;

And the green carpet spread bears you to-day

Back to fair childhood dreams—far, far away. —Elizabeth Reynolds Hapgood

The attraction of a simple dandelion is undeniable. Seeing patches of yellow dot along a field of green is not only a beautiful sight, but it is confirmation that spring is here! Seeing that first dandelion pop through the ground creates such excitement, knowing what that spring is in tow. These poems about dandelions will make you excited for spring. 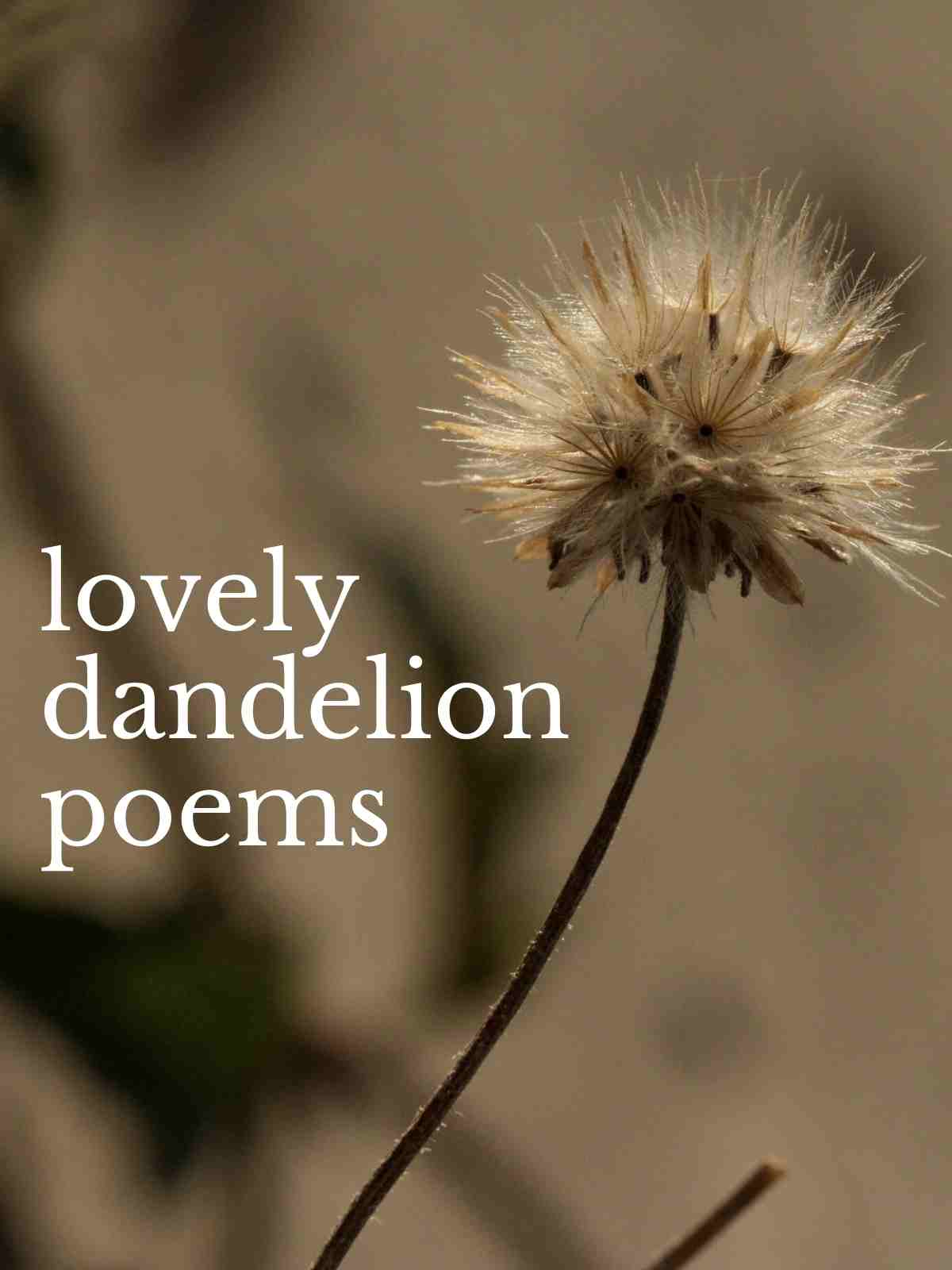 9. Dandelion Poem – This poem focuses on how everyone should embrace themselves as they are, and grow where they are planted, wherever that may be.

10. I’m a Pirate by Annette Wynne – Relating someone picking dandelions from the grass to a pirate finding a ship full of gold, due to their similar gold color.

11. Be a dandelion in a world of roses

Complete your phase in celestial dreams

Of the Sun moon stars

While setting your roots deep

In the warm earth amidst blades of humble grass.

12. Dandelion Delights – Perfect to use in classrooms during National Poetry Month!

I think it makes a lovely scene.

If not stopped, they sprout and grow.

I think it makes a lovely show.

So full and lush,

All you could need.

A shame to think

14. Dandelion Balloons by Lenore Hetrick – A cute poem that conveys a story about a tiny elf that lives in a garden and sees gray dandelions as balloons.

Each day is coronation time,

You have no humble hours.

I like to see you bring a troop
To beat the blue-grass spears,

To scorn the lawn-mower that would be

Your yellow heads are cut away,

It seems your reign is o’er.

By noon you raise a sea of stars

More golden than before. —Vachel Lindsay

16. Dandelion by Josef Weinheber – This lovely poem by an Austrian poet speaks upon the strength of dandelions and how they need not a vase to keep them safe and beautiful, that growing them in the wild is perfect for them.

Dear common flower, that grow’st beside the way,

First pledge of blithesome May,

While children pluck, and, full of pride, uphold,

High-hearted buccaneers, o’erjoyed that they

An eldorado in the gross have found,

Which not the rich earth’s ample round

May match in wealth, thou art more dear to me

Than all the prouder summer-blooms may be —James Russell Lowell