Inside: William Blake Poems That We Love

William Blake was an English poet who set out to bring change in society and the mind of those living in the society. Since many of his works were controversial during the period in which he was writing them – addressing serious social issues such as child labor, racism, and Christianity – he was not widely known nor respected during his lifetime.

However, it is due to these chances he took and the issues he addressed in his art that he is now considered a groundbreaking figure in the history of not only poetry, but the Romantic Age as well.

While there are many, many poems that Blake created that can be regarded as great, here are what we believe to be his 9 best ones. 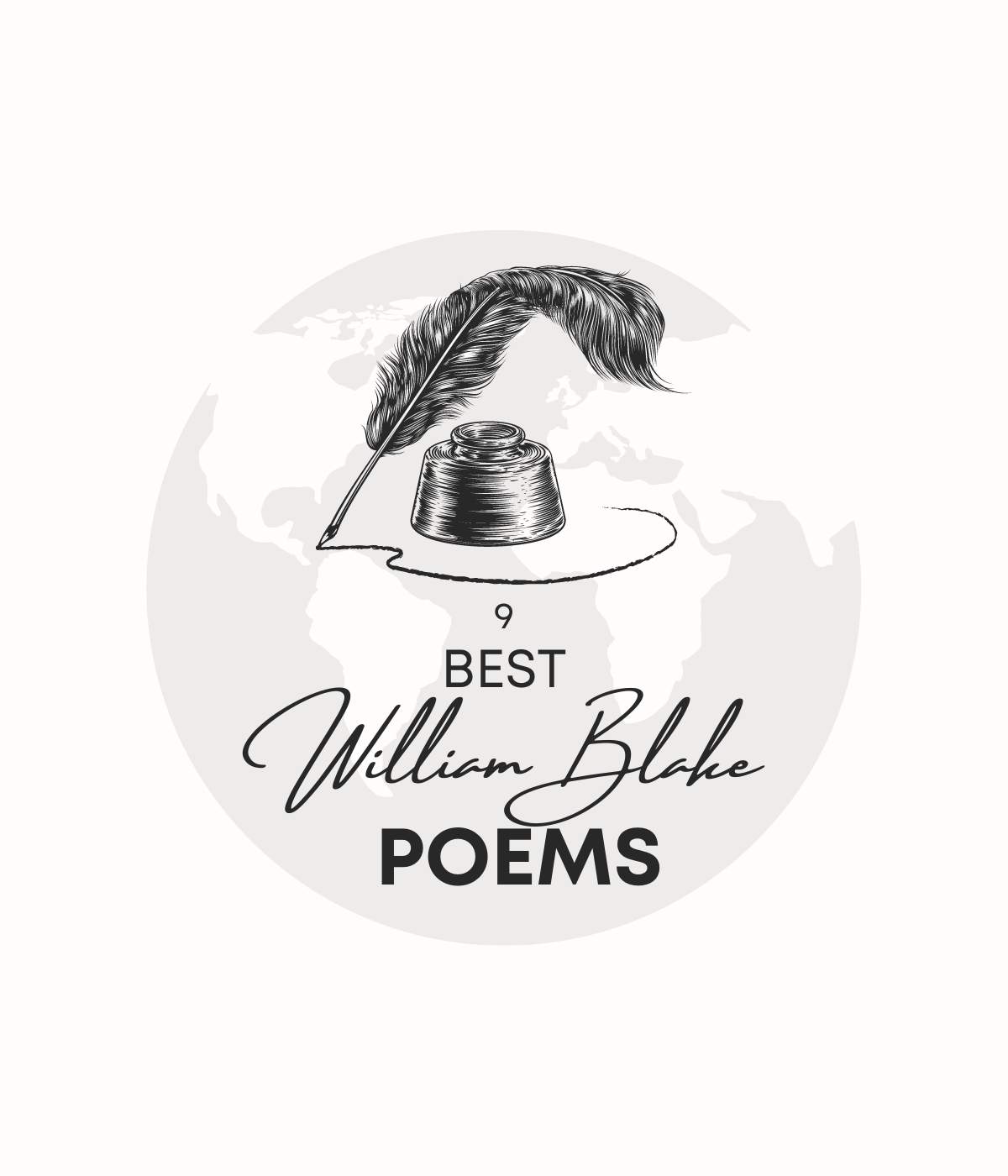 This poem was published in 1789 in his poetry collection called Songs of Innocence. It is regarded as one of the harder to understand poems, and therefore has elicited many different interpretations over the years. Some believe it is simply showing that nature, while beautiful, is unpredictable, while others assume it is an innuendo for something more inherently sexual.

Under leaves so green

Sees you, swift as arrow,

Under leaves so green

Published in Songs of Experience in the year 1794, Blake uses catchy nursery rhyming style to depict a cautionary tale of sorts about anger and keeping emotions bottled up. In the first two lines, Blake explains how expressing his anger to his friend allowed it to end right away; however he did not follow the same pattern when angry with an enemy. The tree in this poem is a metaphor for what happens to one’s emotions – in this case, anger – and how it can grow and grow until it bears poisonous fruit.

“I was angry with my friend;

I told my wrath, my wrath did end.

I was angry with my foe:

I told it not, my wrath did grow.

And I watered it in fears,

Night & morning with my tears:

And I sunned it with smiles,

And with soft deceitful wiles.

And it grew both day and night.

Till it bore an apple bright.

And my foe beheld it shine,

And he knew that it was mine.

And into my garden stole,

When the night had veild the pole;

In the morning glad I see;

My foe outstretched beneath the tree.” 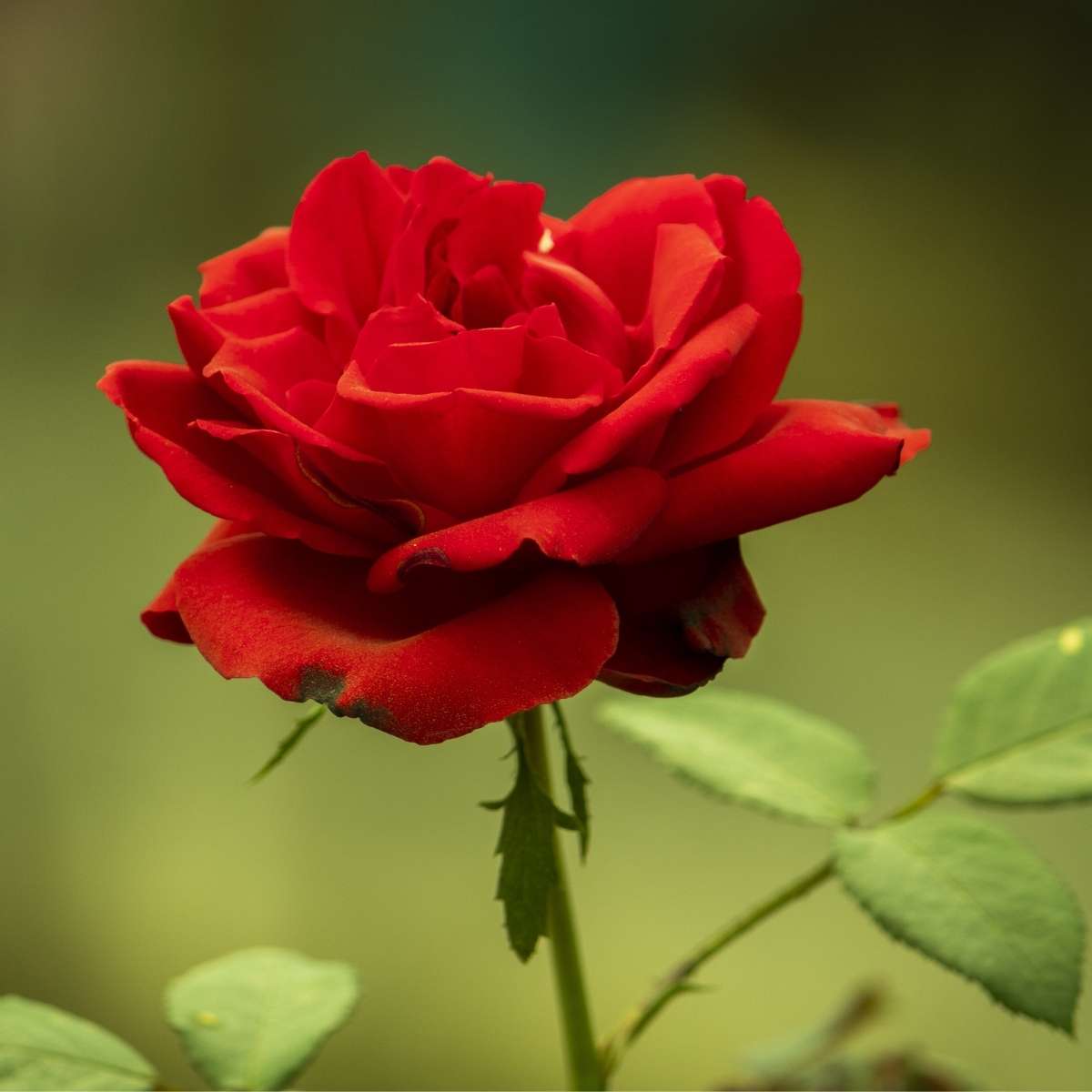 Another poem published in Songs of Innocence, “The Sick Rose” is one of Blake’s poems that is very difficult to interpret. All that is clear is that there are two characters: the rose and the worm, which are personified. Due to its ambiguity, this poem is one that is constantly being debated in regards to what the characters, and the poem overall, represent. Poetry is always subjective, though, so take a look at this one and come up with your own interpretation!

That flies in the night

In the howling storm:

Has found out thy bed

And his dark secret love

Does thy life destroy.”

A religious poem that was published in Songs of Innocence. The speaker is a child marveling at the joy of nature while in turn embodying the nature of joy. Many see this poem as a kind of hymn to God, praising his creations and attempting to appreciate it in its entirety.

“Little Lamb who made thee

Dost thou know who made thee

By the stream & o’er the mead;

Gave thee such a tender voice,

Making all the vales rejoice!

Little Lamb who made thee

Dost thou know who made thee

He is called by thy name,

For he calls himself a Lamb:

He became a little child:

We are called by his name.

In this poem, Blake addresses the issue of racial inequality. It was written while slavery was still legal and prevelant. The speaker is a black boy, who is recounting the lesson his own mother taught him, to a white, English boy. This poem breaks down racial stereotypes from the time, insisting that regardless of the exterior skin color of a person, their insides are light and white and worthy of God’s love.

“My mother bore me in the southern wild,

And I am black, but O! my soul is white;

White as an angel is the English child:

But I am black as if bereav’d of light.

My mother taught me underneath a tree

And sitting down before the heat of day,

She took me on her lap and kissed me,

And pointing to the east began to say.

Look on the rising sun: there God does live

And flowers and trees and beasts and men receive

Comfort in morning joy in the noonday.

And we are put on earth a little space,

That we may learn to bear the beams of love,

And these black bodies and this sun-burnt face

Is but a cloud, and like a shady grove.

For when our souls have learn’d the heat to bear

The cloud will vanish we shall hear his voice.

Saying: come out from the grove my love & care,

Thus did my mother say and kissed me,

And thus I say to little English boy.

When I from black and he from white cloud free,

And round the tent of God like lambs we joy:

Ill shade him from the heat till he can bear,

To lean in joy upon our fathers knee.

And then I’ll stand and stroke his silver hair,

And be like him and he will then love me.”

Blake focuses on the horrors of child labor during the Industrial Revolution in England in this poem. He makes his stance on the subject very clear, using rhyming couplets to get his point across that he views this as an awful thing for children to go through. He does not romanticize child labor at all, and rather focuses on the harsh, brutal reality that many children had to go through.

When my mother died I was very young,

And my father sold me while yet my tongue

So your chimneys I sweep & in soot I sleep.

There’s little Tom Dacre, who cried when his head

That curled like a lamb’s back, was shaved, so I said,

“Hush, Tom! never mind it, for when your head’s bare,

You know that the soot cannot spoil your white hair.”

And so he was quiet, & that very night,

As Tom was a-sleeping he had such a sight!

Were all of them locked up in coffins of black;

And by came an Angel who had a bright key,

And he opened the coffins & set them all free;

Then down a green plain, leaping, laughing they run,

And wash in a river and shine in the Sun.

Then naked & white, all their bags left behind,

They rise upon clouds, and sport in the wind.

And the Angel told Tom, if he’d be a good boy,

He’d have God for his father & never want joy.

And so Tom awoke; and we rose in the dark

And got with our bags & our brushes to work.

Though the morning was cold, Tom was happy & warm;

So if all do their duty, they need not fear harm.

Again in this poem, Blake focuses on the bleakness of London during its Industrial Revolution. The speaker is pointing out all the hardships he sees as he walks down the streets of London, and how miserable it all is. His imagery in this piece intensely depicts the pain and suffering that almost every citizen of the city is experiencing. From prostitutes to babies to soldiers, they are all meek and downtrodden.

I wander thro’ each charter’d street,

Near where the charter’d Thames does flow.

And mark in every face I meet

Marks of weakness, marks of woe.

In every cry of every Man,

In every Infants cry of fear,

In every voice: in every ban,

The mind-forg’d manacles I hear

And the hapless Soldiers sigh

Runs in blood down Palace walls

But most thro’ midnight streets I hear

How the youthful Harlots curse

And blights with plagues the Marriage hearse 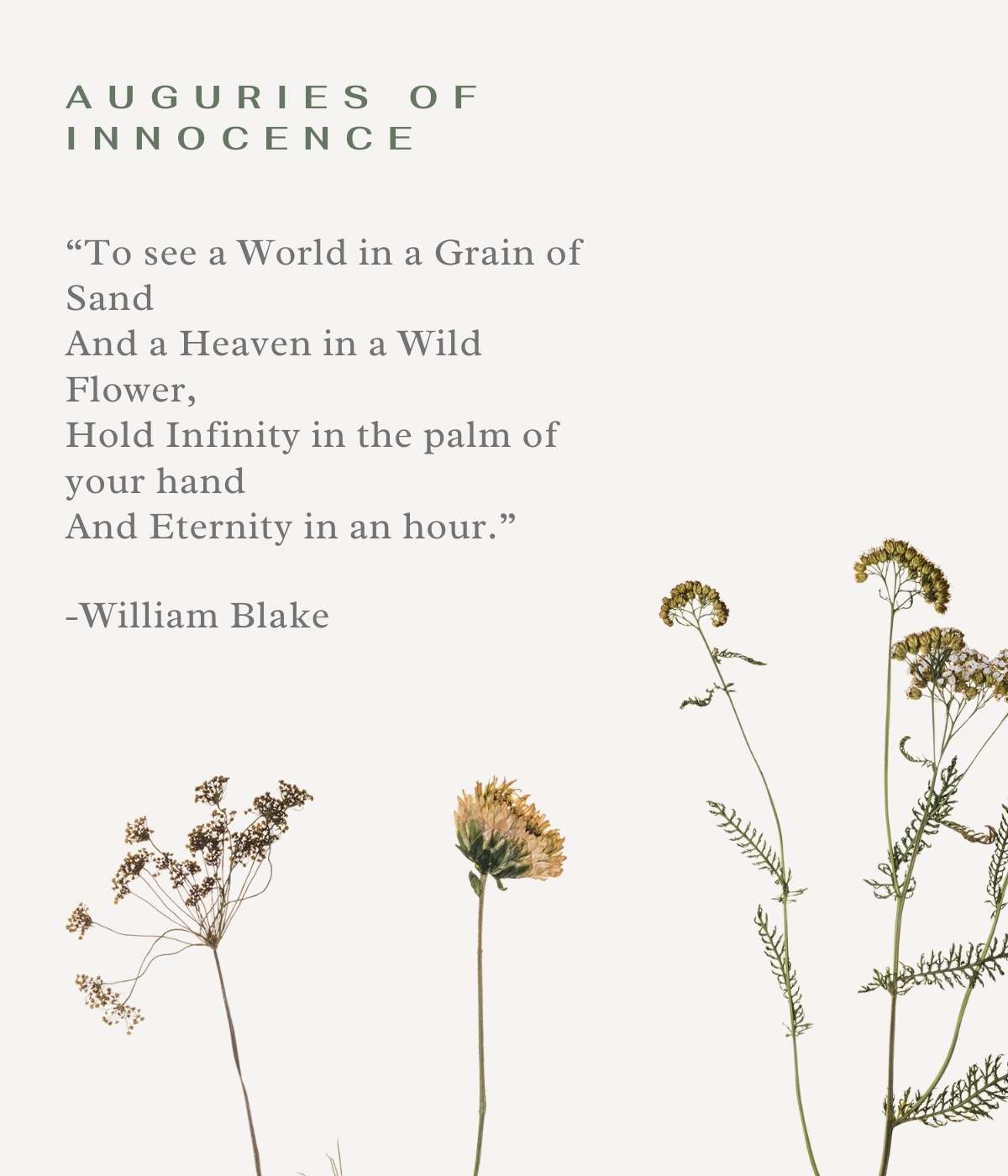 This is a poem about hope and longing. The sunflower continuously follows the course of the sun, hoping it will lead it to a promiseland of sorts. It can be argued that this promiseland is either Heaven or even America, which at the time, was romanticized by many Westerners as a place of liberty and opportunity. Blake uses a great deal of imagery and allusion in this short poem that allows it to be interpreted in many different ways.

Who countest the steps of the Sun:

Seeking after that sweet golden clime

Where the travellers journey is done.

Where the Youth pined away with desire,

And the pale Virgin shrouded in snow:

Arise from their graves and aspire,

Where my Sun-flower wishes to go.

The sister poem to “The Lamb.” While in that poem, a child-like wonder is asking the lamb if he knows that the creator made him and blessed him with a warm coat and food, this poem is the flip side of that wonder. This poem begs the question: how is it that that same creator can create something so fearful? The two poems together create the juxtaposition of how good and evil can exist simultaneously under the same God, while keeping that same childlike curiosity of asking continuous questions.

In the forests of the night;

What immortal hand or eye,

Could frame thy fearful symmetry?

In what distant deeps or skies.

Burnt the fire of thine eyes?

On what wings dare he aspire?

What the hand, dare seize the fire?

And what shoulder, & what art,

Could twist the sinews of thy heart?

And when thy heart began to beat,

What dread hand? & what dread feet?

What the hammer? what the chain,

In what furnace was thy brain?

What the anvil? what dread grasp,

When the stars threw down their spears

And water’d heaven with their tears:

Did he smile his work to see?

Did he who made the Lamb make thee?

In the forests of the night:

What immortal hand or eye,