Inside: Football Poems for Kids and Adults Who Love the Sport.

Many Americans feel that football is the best sport in existence. People become diehard fans of their favorite teams, and stay loyal to them no matter how good or bad they did during the season.

What is it that captivates people so much about football? The athletes combine athleticism, strategy and even a little violence to try and be the big winners at the end of the season.

Families and friends create traditions around the big games, especially the Super Bowl, and come together to cheer for their team, share time together and make memories together.

If you are a football fan, we think you will love this collection of 11 Football Poems for Kids! 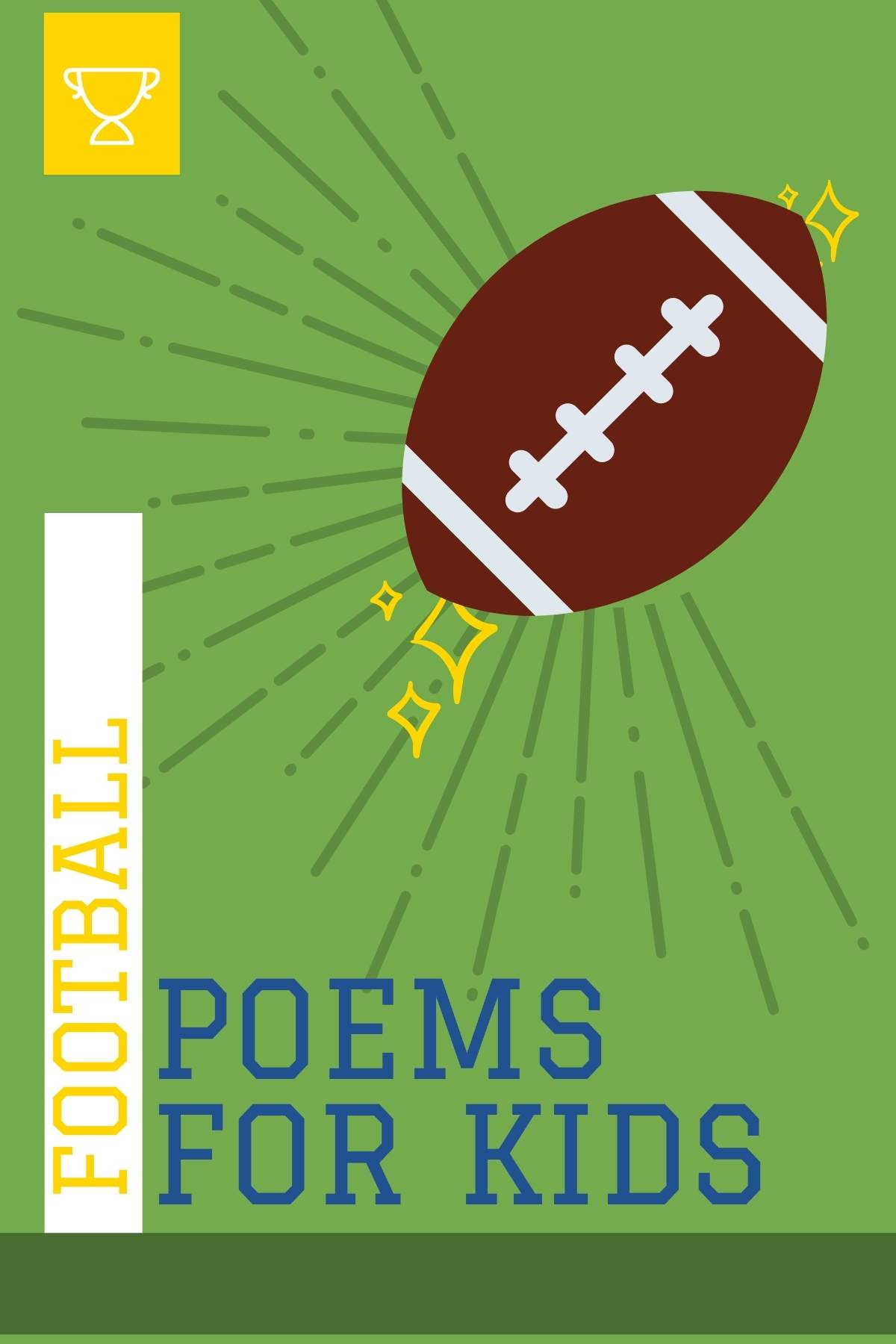 1.Our Teacher’s a Football Fanatic

Our teacher’s a football fanatic.
It’s all that he has on his mind.
He listens to games on his headphones,
and frets when his team is behind.

He jumps up and down with they’re winning.
He screams when they fumble a pass.
We know we’re supposed to be reading,
but watching him’s simply a gas.

Our principal walked in on Friday
and he was too angry to speak.
Our substitute started on Monday.
Our teacher’s been benched for a week.

Blitz and blocking, bump –and-run
Drive and drop kick, the other team’s done
End zone, end line, ebb and flow
Snap, sack, scrambling, I love it so
Football is fun and fabulous too
Let’s go to the stadium, just me and you

My dad loves football
He even plays it in his dreams.
Mum doesn’t mind,
But when the whistle blows she screams.

4. The Football Game Is on TV

The football game is on TV.
The chips are in the bowl.
We’re totally excited and
about to lose control.

Our living room has turned into
a huge, chaotic scene.
We’re madly jumping up and down.
We’re screaming at the screen.

My mom and dad are yelling
while my baby brother wails.
My sister’s sitting on the sofa
chewing on her nails.

I’m running all around the room
as if I’ve lost my mind.
It’s not because our team’s ahead.
It’s not that they’re behind.

The reason that we’re shouting
and we’re running all about,
is that the game was tied and then
the Internet went out.

No matter the weather,
No matter the pain,
The kick always starts the game,
The team runs it back as far as they can
And the opposing team must defend
Run or pass you don’t want to finish last.
Four fifteen minute quarters to decide the winner.

Practice is the key to a successful team
Playoffs are where they want to be.
The loser goes home empty handed
And the winner moves on.

With the Super Bowl in view
The lucky few will take home all the glory.
And that’s the end of my story. 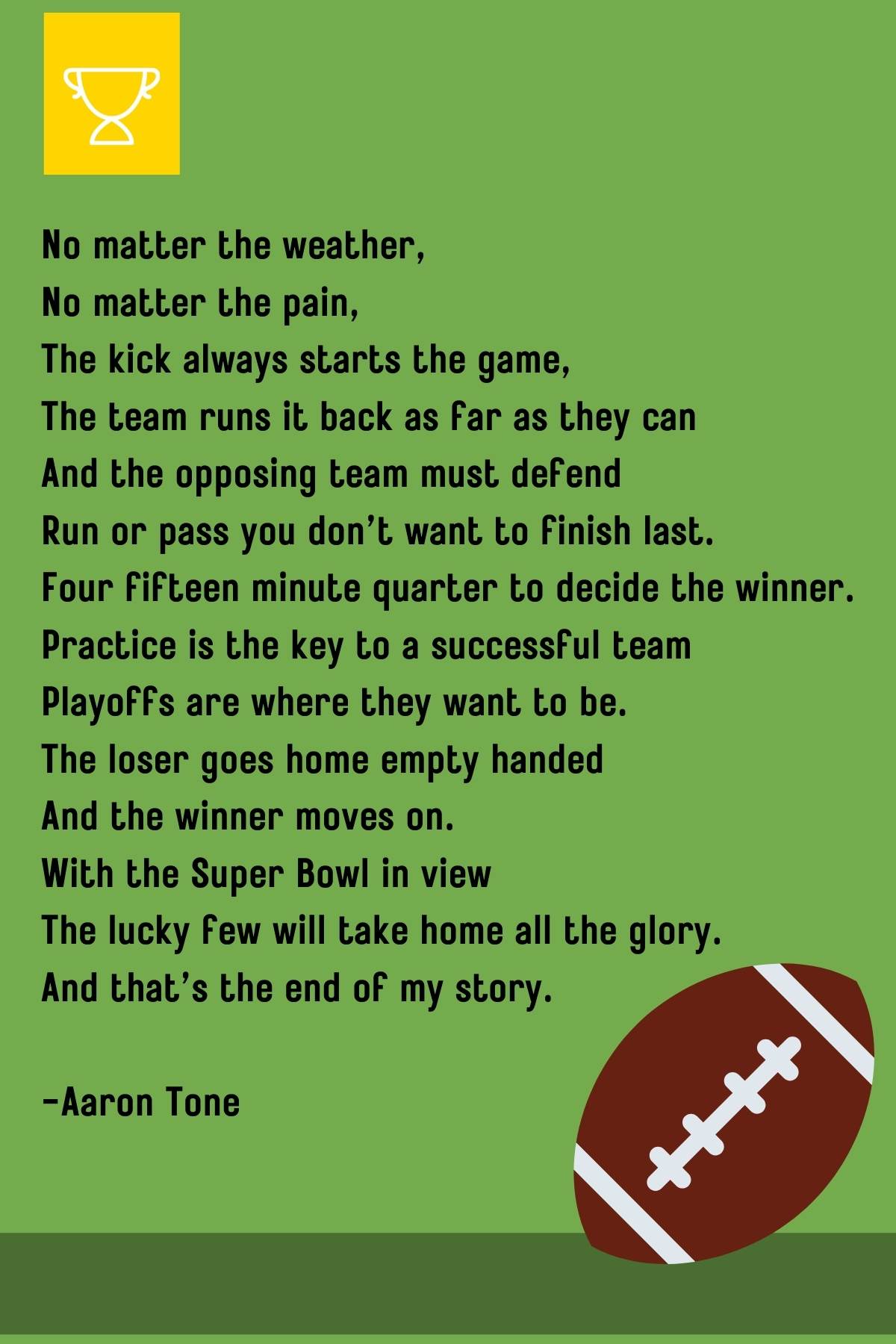 The world welcomes a newborn baby boy.
To the mother and father, he is a bundle of joy.
Right now of course, he is so small.
It won’t be long before he is big and tall.
As a defensive lineman, he will hone his attack.
The boy will have no trouble sacking the quarterback.
He will control the boards, slam dunk, and grab every rebound.
I’m sure a sports superstar will be found.

Walks in the park, apple cider, the smell of pumpkin pie
Cuddling up next to a fireplace, trick or treating,
and the twinkle in a child’s eye

In the fall, it is time for the football season.
Mothers go to the game, but for one reason,
What is the reason? Let there be no denial,
It’s to see if her son gets up from the pile!

Oh, she may have lots of pep, and do all the cheers,
and she hasn’t missed a game in many a year.
But she doesn’t do it just to keep in style,
It’s to see if her son gets up from the pile

She keeps tracks of the score and acts very alert,
Wondering how to get the bloodstains out of his shirt.
She always sits on her seat right on the aisle,
Just in case he doesn’t get up from the pile!

When the whistle blows, she strains her eyes,
For the jersey number she’s memorized.
She’ll sit quite still, heart stopped all the while,
Til’ she sees that number come up from the pile!

She’ll stand and shout, “My son stopped the play!”
“Sit down, dear, he clipped,” is all Dad can say.
She may not know a punt from a telephone dial,
But she knows when her son gets up from the pile!

Good ol’ Mom, she’s a dear, & your very best fan,
But you’ll be her little boy even when you’re a man,
She makes all your games, you think with a smile,
Just to see if “her baby” gets up from the pile!

To play as if today
Is your only chance.
Some say, “It’s just a game.”
Have they done the Victory Dance?

When hard-earned Victory
Was finally at hand,
Have they felt the glory
Raining down from the stands?

To do or not to do….
No one wants to hear, “We tried.”
Effort and dedication will be rewarded…
They are the magic on your side.

Yes, to fall short is still an option;
But much better to succeed.
Heroes are made and remembered
Only by their deeds.

So, just go out and win.
Give your all to each and every chance.
Persevere and achieve…

And do the Victory Dance.

Some people would say that Football is just a game,
Others say life and football are the same.
That it is more than just making calls,
And throwing a funny shaped ball,
Some say its about the intensity and passion above all,
Its a feeling they get on the field after they win a game.
It does not matter if it rains or snows,
They will be out there,
Because football is all they know,
So if you ask them is football just a game?
They will answer that quick and without any shame! 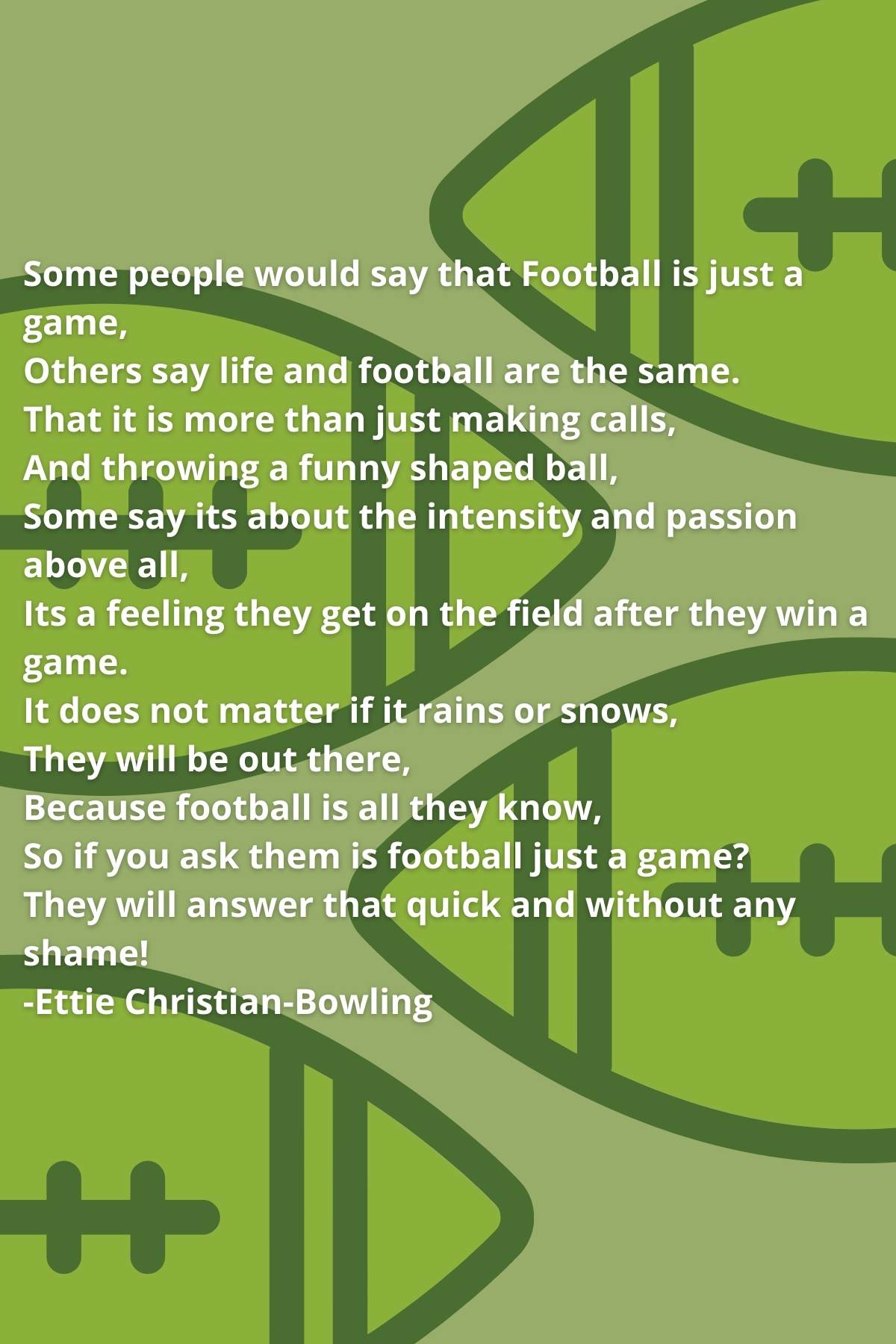 11. All the Thoughts at a Football Game

my son he says.