Inside: Mermaid Poems to Use When You Want to Cause a Splash.

Mythical and entrancing, mermaids have captured the imagination of humans for a very long time. In fact, the first known appearance of mermaids in human culture seems to have occurred about 1000 BC in Assyria (in the middle east close to Syria and Iraq).

In Assyrian myths, the goddess of fertility, Atargatis, cast herself into a lake and became a mermaid.

Mermaids appear in Greek mythology as well. Achilles’ mother was said to be a Nereid named Thetis. Another notable Nereid was Amphrite, who married Poseidon and whose son is Triton, a merman. 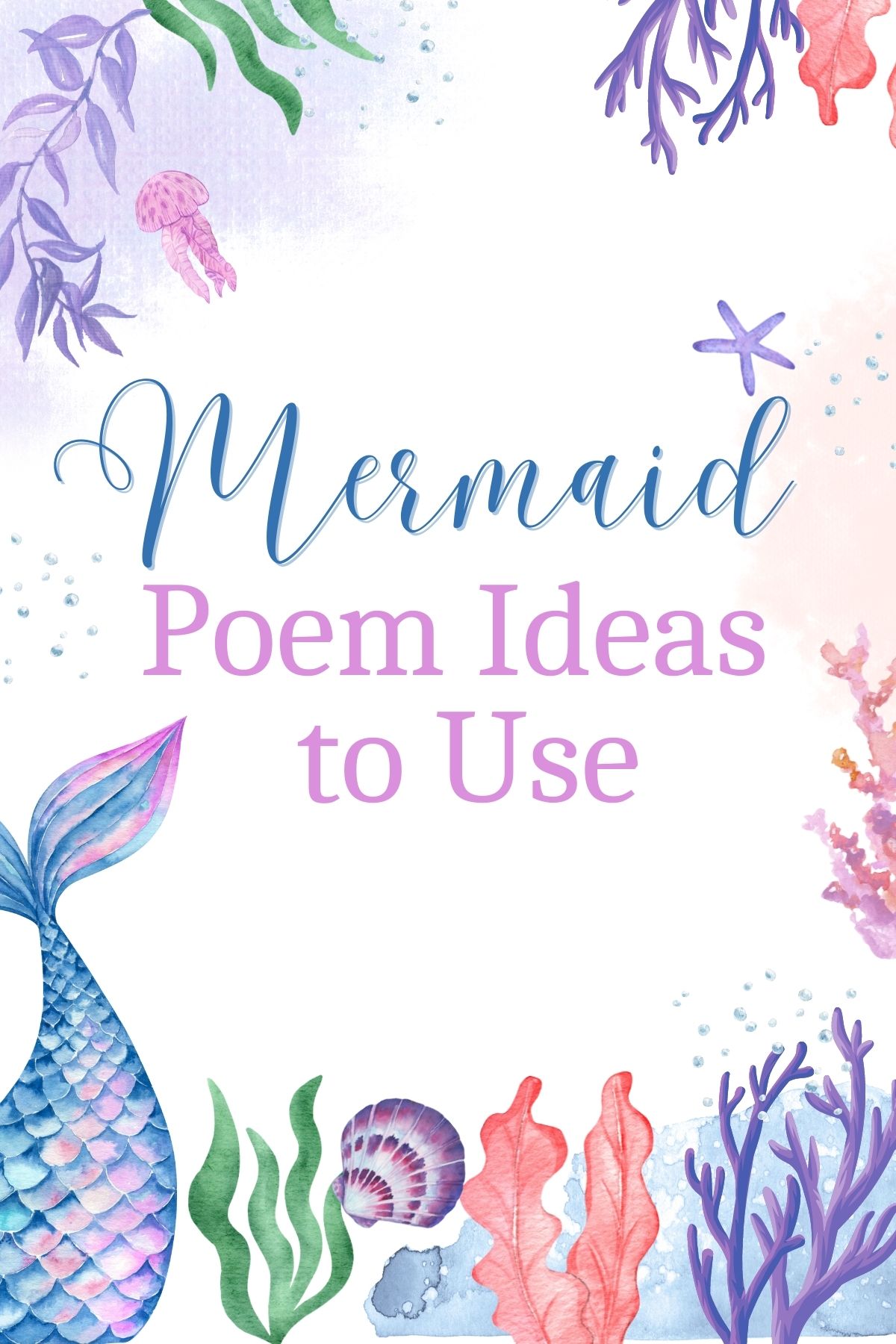 If you are a mermaid fan, these 31 Mermaid Poems & Ideas will help you to express your adoration for the beautiful mythical mermaid.

1.The Mermaid
A mermaid found a swimming lad,
Picked him for her own,
Pressed her body to his body,
Laughed; and plunging down
Forgot in cruel happiness
That even lovers drown.

2. Our Splendid Death
It is said, only once in this lifetime will we see,
The moon become the sun.
We gather on the rocks fidgeting with excitement.
Many have journeyed here from depths afar,
Some nearing the end of their time.

The dark moon bobs on the silent waves,
Around it appears the circle of flame.
Within a hundred heartbeats the sun burns it away;
Gods golden hands are warming us.
We see each other in full glory, a thousand colours shared;
And without thought, we dance like sea nymphs.

Alas, we must rejoin the ocean,
While those who wish shall bask upon the rocks.
Motionless, their skins will crystallize,
While splendid warmth fills and blesses them.
-Colleen Swan

Thou rememberest since
Once I sat upon a promontory,
And heard a mermaid on a dolphin’s back
Uttering such dulcet and harmonious breath
That the rude sea grew civil at her song,
And certain stars shot madly from their spheres,
To hear the sea-maid’s music?

Mermaids
Believe in magic.
Play in the waves.
Know how to weather a storm.
See life’s beauty.
Dive for their soul.
Ride the tides of life.
Know there are treasures in the deep.
-Unknown 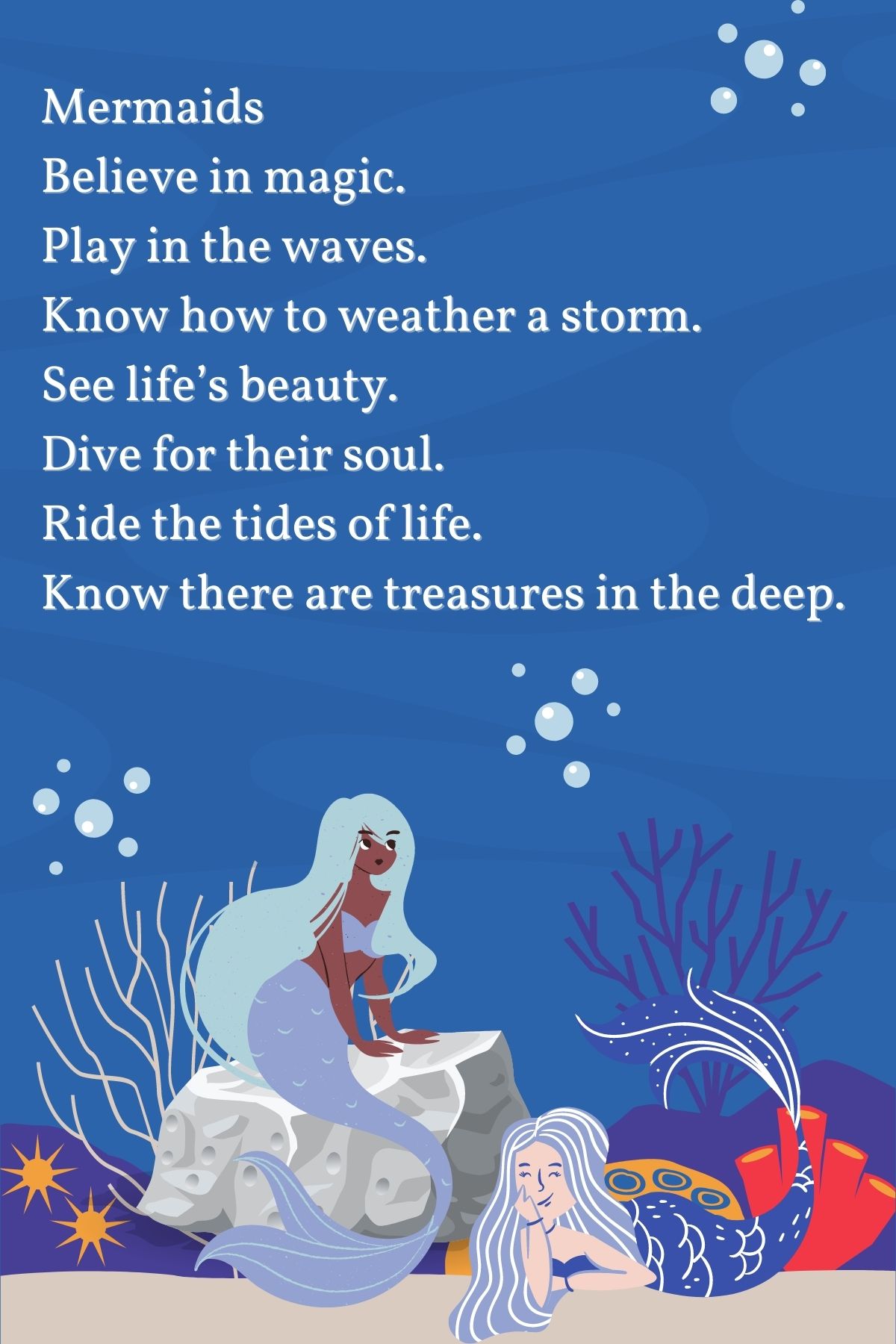 5. Shall I… Famous Mermaid Poem

Shall I part my hair? Do I dare to eat a peach?

I shall wear white flannel trousers, and walk along the beach.
I have heard the mermaids singing, each to each.
I do not think they sing to me.

I have seen them riding seaweed on the waves
Combing the white hair of the waves blown back
When the wind blows the water white and black.

We have lingered in chambers of the sea
By sea-girls wreathed with sea-weed of red and brown
Till human voices wake us, and we drown.

Emerging from the blue waves
A cheerful and mysterious deity,
With fresh pink lips
And an enchanting ivory breast.
Her splendid raven hair
Locks on her alabaster shoulders
Her eyes have the glow of a star
And the flashing fire of love.

Sea anemones waving tentacles at me
Forgetting how painful their sting can be
Clouds of jellyfish in a celestial dance
Must I awaken from this aquatic trance?

For here I am a mermaid, scales and all
Breathing underwater I now recall
I can live in both worlds above and below the sea
For anything is possible with a dream inside of me
-Uniquely Mermaid

8. Mermaid
Hey when I was a lad in fishing town an old man said to me
You can spend your life your jolly life just sailing on the sea
Now you can search the world for pretty girls till your eyes are weak and dim
But don’t go swimming with the mermaid son if you don’t know how to swim
If you don’t know how to swim
For her hair is green as seaweed and her skin is blue and pale
And I tell you now before you start you can love that girl with all your heart
But you’re just gonna love the upper part you’re not gonna like the tail
-Shel Silverstein

Oh how many tragic tears,
Must mermaids weep each day?
To leave behind the trail of gems,
Washed up on the shore in the bay.

Beautifully sculpted sea glass,
Is mermaid’s tears they say,
But it may be magical, mystical dust,
Sprinkled by mermaids at play.

Maybe the sparkling pieces of glass,
Were not really theirs to keep,
So every day, when the tide goes out,
They toss them back onto the beach.

Perhaps they’re being playful,
Teasing us into their game,
They sprinkle treasures for us to find,
Not to join them would be a shame.

My imagination is greatly piqued,
As I comb the beach, deep in thought.
Walking along the ocean floor,
To see what the tide has brought.

Sometimes your mermaid poems come in the sweetest stanzas… perfect for cards, captions and texts to your ocean loving friends.

11. by her sweet song
the ocean falls asleep
to her lullaby
-Ram Mehta 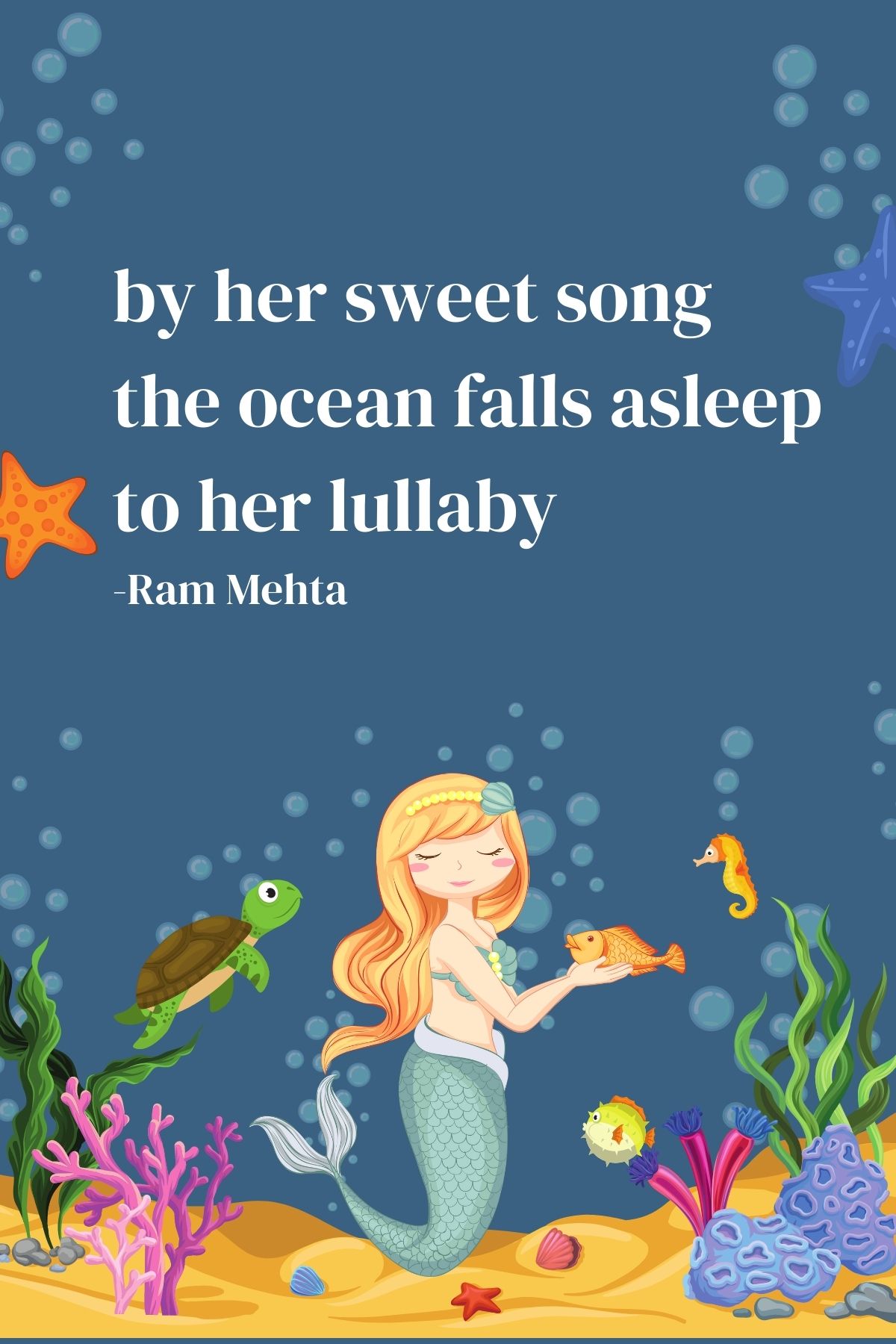 14. Once upon a time
A mermaid was curious
About life on land
-Unknown

16. Under the blue sea
A mythical being lives
Siren song she sings

17. “My mother told me lullabies
Of the evil mermaids
Leucoisa, Ligeia, and Lore-lay

And every since, my
Childhood days, that’s
What I have chosen to be,
A dangerous nymph
A lethal siren of the sea.”
-Conny Cernik

But sooner or later cut corners catch
Barnacles grew where sin dispatched
And a glittering tail, scales to sweep
Now she’s a slave to her wicked deep.”
-Chrissie Pinney

19. “If you swim effortlessly in the deep oceans,
ride the waves to and from the shore,
if you can breathe under water and
dine on the deep treasures of the seas;
mark my words, those
who dwell on the rocks
carrying nets
will try to reel you into their catch.
The last thing they want
is for you to
thrive in your habitat
because they stand in their atmosphere where
they beg and
gasp for some air.”
― C. JoyBell C.

20. “fiction:
the ocean
i dive
headfirst
into
when i
can
no longer
breathe
in
reality.

21. Who would be
A mermaid fair,
Singing alone,
Combing her hair
Under the sea,
In a golden curl
With a comb of pearl,
On a throne?
-Tennyson

Oh sea, we sail your sultry wave.
The salty taste on panting tongues.
The wild splash does not behave –
The ebb and flow of twining lungs.

Oh sea, we sail with mermaid tales.
Our men do crave the seaweed wraps,
Toss overboard by giant whales,
Or climb below and take long naps.

Oh sea, we see the horizon,
The loss of land, triangle’s peak.
We lie upon the deck, rise in
The cockcrow suite – we cannot speak.

Oh sea, the foaming clouds, under,
over – they breach my naked feet.
The lightning, dark, with stark thunder.
Nightmare! The wonderment, complete.

Oh sea, this day but shining bright.
The boat’s luxury slant, we grin.
The sirens, lost…our gang is tight.
Whether we race or swim, we win.
-Julia Ward

23. “You asked me who I thought I was before.
I said maybe I was a fish
because I love water
and you said,
you thought a mermaid, maybe. 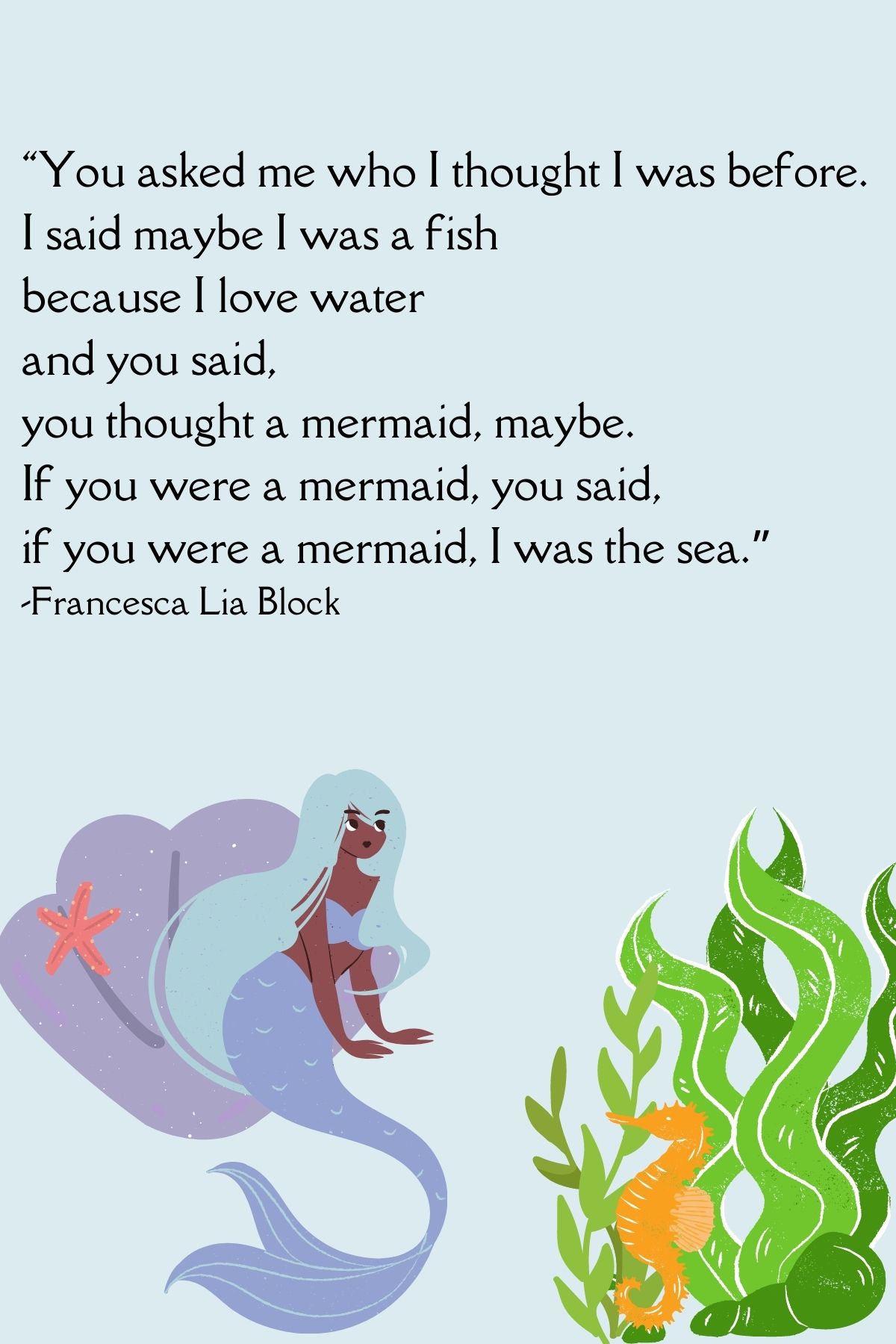 24. Swimming in the ocean.
Feeling all at sea.
My woman by my side
swimming next to me.

Maybe I’m just dreaming?
The expression of a wish?
To live in a reality
we’re my girlfriend is a fish.
-John Grinsell

25. “Maybe i would become a mermaid…
I would live in the swirling blue-green currents,
doing exotic underwater dances for the fish,
kissed by sea anemones,
caressed by seaweed shawls.
I would have a dolphin friend.
He would have merry eyes and thick flesh of a god.
My fingernails would be tiny shells
and my skin would be like jade with light shining through it
I would never have to come back up”
-Francesca Lia Block

26. “I am a creature of the Fey
Prepare to give your soul away
My spell is passion and it is art
My song can bind a human heart
And if you chance to know my face
My hold shall be your last embrace.
-Heather Alexander

The sea fills my ear
with sand and with fear.

You may wash out the sand,
but never the sound
of the ghost of the sea
that is haunting me.”
-Ted Hughes

28. “The day I bought my cane, I realized
I was through with the burden of feet. Instead,
I am going to become a mermaid.
I have always liked the ocean, the promise
of depth. I am tired of this dry world,
all of this dust and sickness, these barren fields.
I want to dive without drowning. I want to kiss sharks.
I want men to carve me into the bows of their ships
like a prayer, before I lure them into the depths.”
-Clementine von Radics

29. “Like a mermaid in sea-weed,
she dreams awake,
trembling in her soft and chilly nest.”
-John Keats 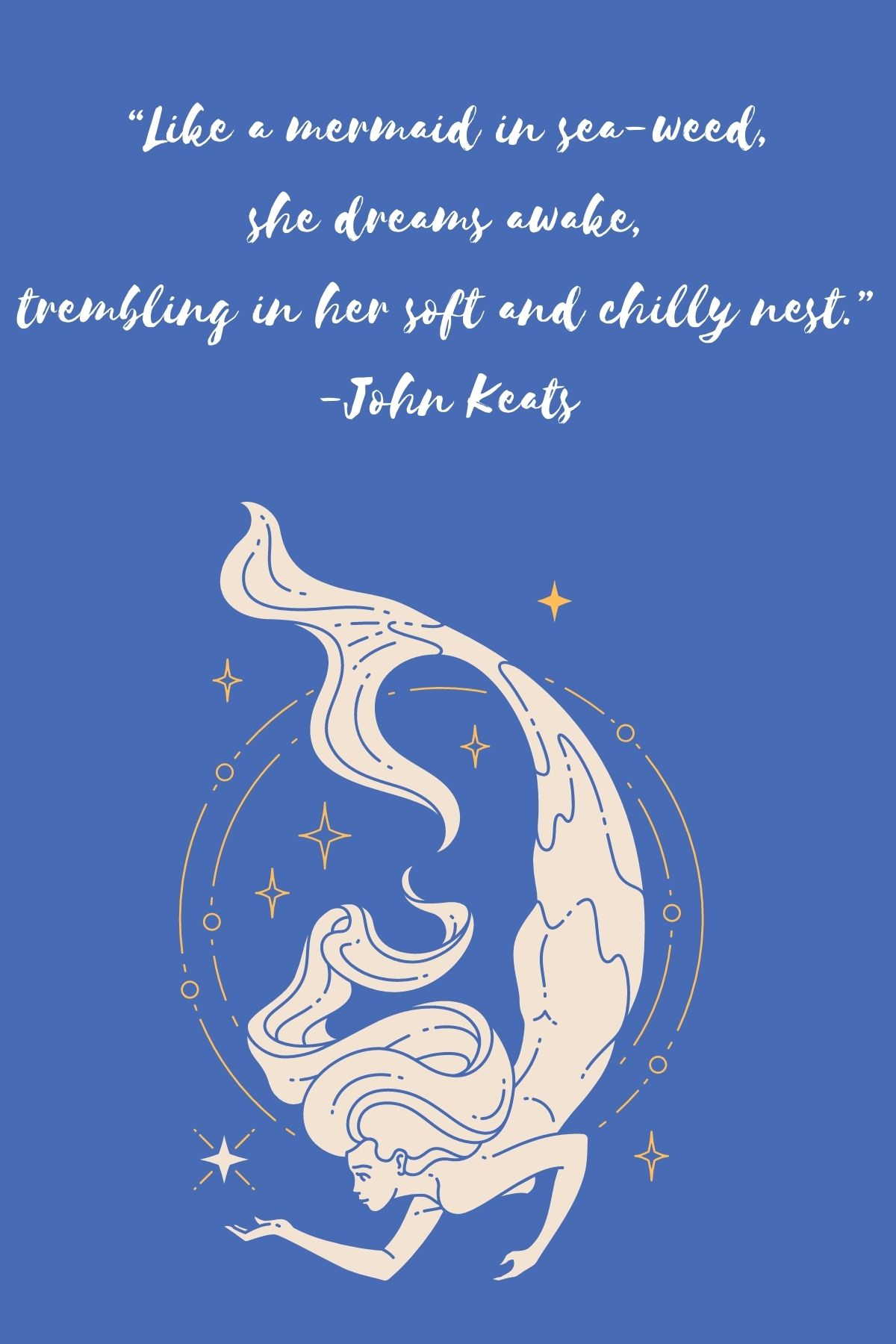 30. “Tell me the story, Pew. . . .
It was a woman.
You always say that.
There’s always a woman somewhere, child; a princess, a witch, a stepmother, a mermaid, a fairy godmother, or one as wicked as she is beautiful, or as beautiful as she is good.
Is that the complete list?
Then there is the woman you love.
Who’s she?
That’s another story.”
-Jeanette Winterson

31. “Go and catch a falling star,
Get with child a mandrake root,
Tell me where all past years are,
Or who cleft the Devil’s foot.
Teach me to hear the mermaids singing,
Or to keep off envy’s stinging
And find What wind Serves to
advance an honest mind.
Decide what this is about
Write a second verse yourself”
― Diana Wynne Jones