Inside: 17 fun poems about soccer that rhyme and some uplifting soccer quotes!

Soccer is one of the world’s most popular sports, and it’s a sport that everyone has probably played at least once in their life. It’s a fast-paced and exciting sport both to play and to watch, with fairly simple rules, which is what makes it so widely popular in all age groups. Soccer is a team sport, with eleven players playing on a team at a time.

This makes it the kind of sport wherein teammates are like family, as they all rely on each others’ unique skills and talents to work towards a collective goal: winning a game!

As with anything that one is passionate about, it is common for soccer lovers and players to write poems about soccer. These soccer poems are infused with a passion for the game, their teammates, their coaches, and the thrill of playing. Check out these awesome soccer poems. 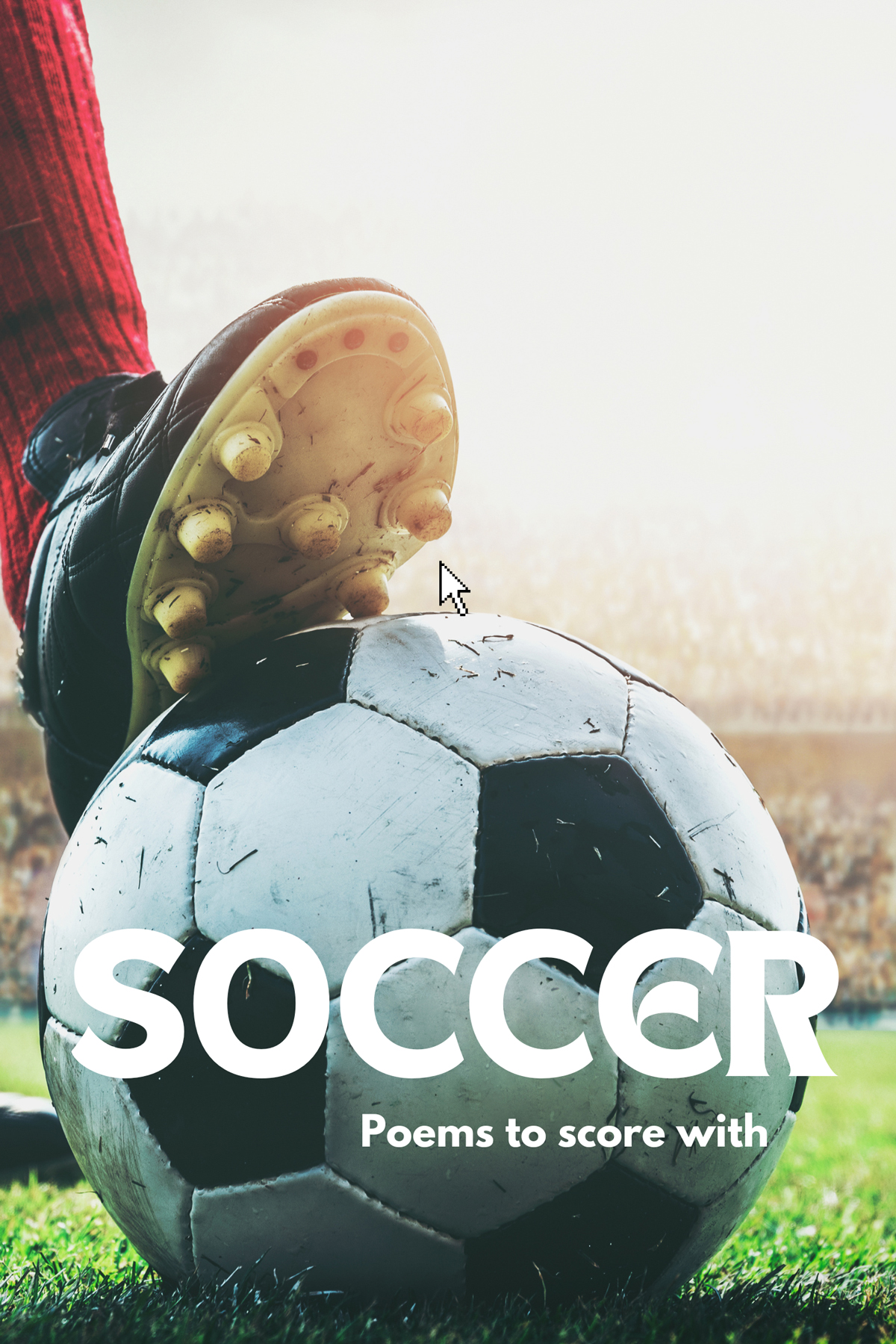 Poems that rhyme are sometimes so much more fun to read and write than poems without rhyme schemes. This is a collection of soccer poems that rhyme, all about the love of playing and watching the sport and about the challenges that sometimes come along with this rambunctious, beloved sport.

1. Soccer A sweet piece about a player’s love for the sport and her incredible team, even if they don’t always win.

2. The Soccer Prayer A touching poem that expresses gratitude for the sheer ability to be able to play this exhilarating sport, in addition to expressing thanks for the people with whom they play.

And watch me deflate-

A once new soccer ball

But stomped on, defaced,

And crushed out of shape-

And watch me deflate.

From the moment your foot first touched the ball

The look on your face said it all.

This is what you were born to do.

Growing up, you would continue to play, you just knew

Soccer wouldn’t be ready for you.

Years passed, and so did you, as you became a star.

The training you’ve had would take you far.

How far you asked? Championship Game, here you came.

With a minute left, you shot the ball hard and upset.

But luckily, Whoosh! The ball exploded into the net.

She gets out there and hustles

She does her very best

It’s all about the teamwork

And winning is her quest

Pretty as a picture

She could be most anything

But for now she’s chosen soccer

And working hard for her team

The ball is flying too

She’s got those rules down good

And she knows just what to do

So come on folks and watch the game

If you want to see the best

A girl who could be a beauty queen

But soccer is her quest! 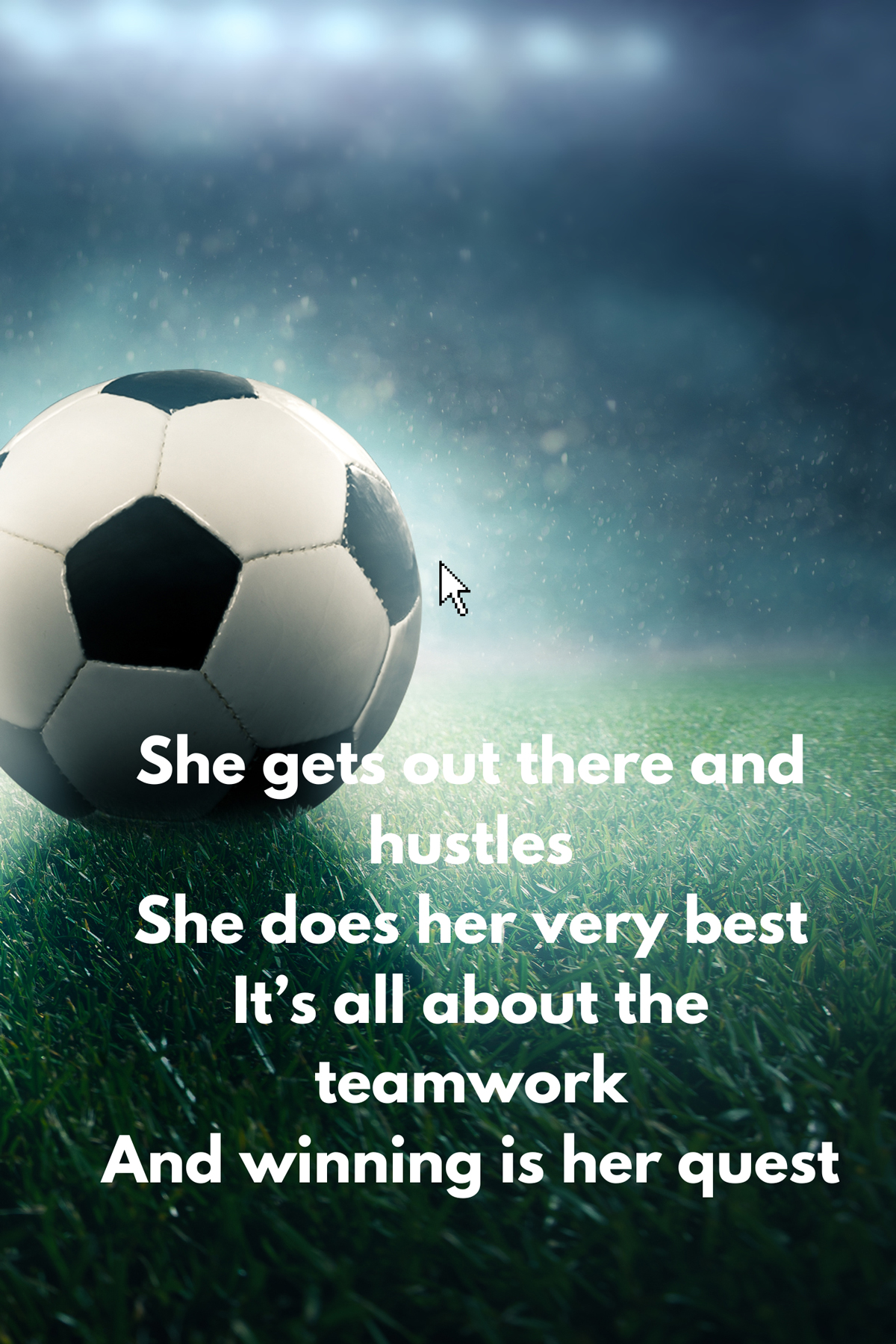 The following poems don’t rhyme, but they are still packed with intense emotion and a passion for soccer. Some are written about the intensity of playing a hard game, some are pre-game prayers and proclamations, and others are written in appreciation for the sport or their teammates and mentors.

6. This is Soccer  A sensory poem that puts the reader right in the shoes of the player, feeling the cool air and the anxious excitement of the anticipated game.

7. Instructions This long soccer poem is like a long monologue that a coach might give to their players. It is infused with themes of perseverance and it serves as a good motivational tool.

8. Soccer Blessing An uplifting sentiment to be read or spoken before a practice or a game, hoping for improvement each time a player plays the game.

9. Female Soccer Player An empowering piece about being a female soccer player, and all of the impressive strength it takes.

The Beautiful Game, inflamer of passion,

Maker of legends and timeless skill;

The sport of the world, whether rich or poor.

From the packed dirt streets of Africa,

To the green grass pitches in England,

Is that matchless, extraordinary, game of games played.

It’s a game of running, yet not always all out.

It’s a game of passion, yet under harness and rein.

It’s a game of team, of passing and sharing.

There he goes for his opponents goal

He dribbles through each player

he’s on a roll

He takes the shot and curves it by

The keeper dives for it far and

The goalie misses it the balls in the net

There’s a moment of silence

The winners jump for joy that win was a must

they leave in disgust

To be playing all year long on

Of how to play the true game of

The heroes kick up the wind

And kick up the sun’s rays

Till the sweat reminds us of the power

We want them to get the cup for us

When they do we promise to hail them

Though not all of us can have it

Those who lose want to kill

But we remember more excitedly

Those who put their lips to it

Will play it and play it

Because our heroes roar! And roar!

As with fans of any sport, soccer fans always look to the best players in the world for inspiration and motivation. Some professional players have an incredibly vast and fiercely loyal following, and they don’t take that lightly. These famous athletes make it a point to address and inspire their fans who may become famous soccer players themselves in time. These are some inspiring quotes from world-famous soccer players.

14.“If you don’t believe you are the best, then you will never achieve all that you are capable of.” —Cristiano Ronaldo

15.“Keep working even when no one is watching.” —Alex Morgan

16.“I’ve never scored a goal in my life without getting a pass from someone else.” —Abby Wambach

17.“You can’t just beat a team, you have to leave a lasting impression in their minds so they never want to see you again.” —Mia Hamm